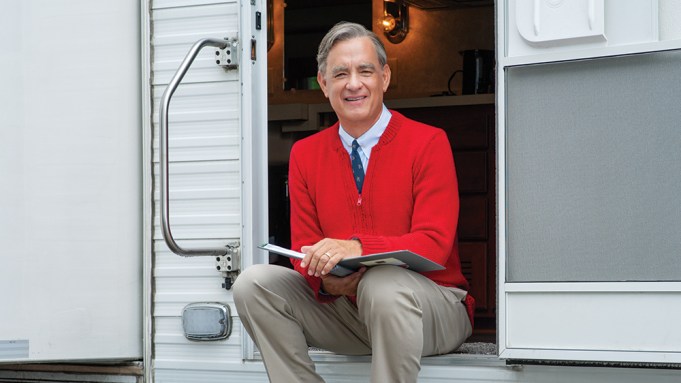 Sony recently hosted a SAG-AFTRA screening of “A Beautiful Day in the Neighborhood,” the Marielle Heller-directed drama starring Matthew Rhys as a magazine writer who befriends Fred Rogers, played by Tom Hanks.

While the screening didn’t include a guild Q&A with cast or the film’s creative team, the audience was greeted with a video message from Mister Rogers’ widow, Joanne. “The film is a wonderful tribute to Fred’s life. But more than that it’s incredibly timely. With so much conflict going on in the world, I think people are hungry for kindness,” she said. “Fred’s legacy reminds us to be kind and to be neighborly, to try and forgive those who have hurt us and to see the innate goodness in all people.”

The theater, a full house of about 200 people, was immediately filled with “awws” and “aahs.”

“Fred used to say that the space between the television set and the person watching it was holy ground,” Rogers continued. “I believe that’s true in this theater today, and may I add that I know Fred would be thrilled to have Tom Hanks representing him on the
big screen.” More “awws” and “aahs” were heard as the film began.

Who better to play the revered children’s television host than Hollywood’s most beloved actor, Tom Hanks? Who better to give her stamp of approval than Mister Rogers’ wife?

It didn’t take long after the film’s premiere at the Toronto Film Festival for Hanks to become an awards season favorite for supporting actor (Rhys will be put up for lead). It’s been 19 years since Hanks was last nominated for an Academy Award for “Castaway” and 25 since he won his second for “Forrest Gump.”

His performance in “A Beautiful Day in the Neighborhood” could earn him another Oscar nomination and possibly a win.

In his review of the movie for Variety, Owen Gleiberman wrote: “In ‘A Beautiful Day in the Neighborhood,’ Hanks isn’t just good — he’s transporting. He takes on Mister Rogers’ legendary mannerisms and owns them, using them as a conduit to Rogers’ disarming inner spirit. He makes you believe in this too-nice-for-words man who is all about believing. ‘A Beautiful Day in the Neighborhood’ is a soft-hearted fable that works on you in an enchanting way. When the film comes out (at Thanksgiving), there won’t be a dry eye in the megaplexes of America.”

Not only is it a feel-good film, but one can never underestimate the power of nostalgia to get out the vote. In this case, it doesn’t matter how old you are: Mister Rogers is the ultimate throwback to a time when the world was — or at least appeared to be — much nicer and simpler. In fact, the final episode of “Mister Rogers’ Neighborhood” aired on Aug. 31, 2001, just 12 days before the world changed forever on Sept. 11.

And unlike comic book franchise blockbusters, where superheroes with capes are needed to save the world, Mister Rogers made us all feel safe and secure simply by putting on his red sweater and asking us to be his neighbor. The warm feelings conjured by the film could go far with Academy voters.

Not that Hanks doesn’t have significant competition. Early favorites for supporting actor also include Brad Pitt (“Once Upon a Time … in Hollywood”), Willem Dafoe (“The Lighthouse”), Jamie Foxx (“Just Mercy”), Anthony Hopkins (“The Two Popes”) and Al Pacino (and possibly Joe Pesci) for “The Irishman.” Sterling K. Brown (“Waves”) and Foxx’s “Just Mercy” castmate Rob Morgan also might be contenders. And the list could perhaps include Taika Waititi for his work as a ridiculous Adolf Hitler in “Jojo Rabbit” as well as young “Jojo” newcomer Archie Yates, although they’re likely long shots.

Hanks is currently shooting Paul Greengrass’ historical drama “News of the World” for Universal, so his appearances on the awards circuit may be limited. However, just two days before Oscar nominations voting closes on Jan. 7, Hanks will receive the Cecil B. DeMille Award at the Golden Globes. The adoration from the audience — expect a standing ovation — and his speech could help secure enough votes to earn him his sixth nom.

Indeed, the Oscars on Feb. 9 could be quite a beautiful day for Mr. Hanks.