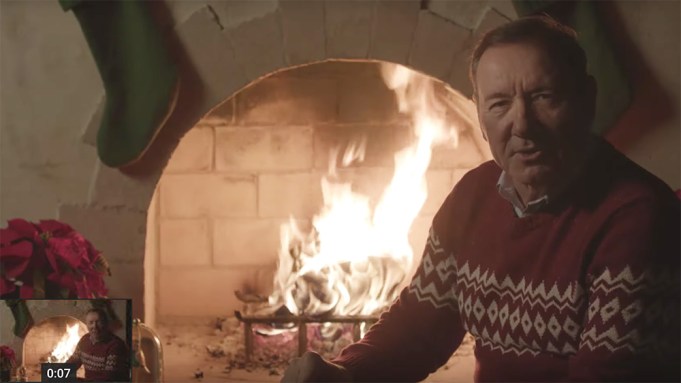 Kevin Spacey shared a bizarre, minute-long video on Christmas Eve, in which he again channels his “House of Cards” character Frank Underwood.

“You didn’t really think I was going to miss the opportunity to wish you a Merry Christmas, did you?” asked Spacey as Underwood, who was killed off “House of Cards” in the show’s final season.

Spacey posted a similar video last year, vaguely addressing the sexual assault allegations that derailed his career. He was accused in 2017 of sexual assault by more than a dozen people. In October, the Los Angeles County District Attorney’s Office dropped a sexual assault case after the accuser died. He got another legal break in July when prosecutors disagreed on a different sexual assault case, citing “unavailability” of the complaining witness, an 18-year-old busboy in Nantucket, Mass.

Spacey made an equally offbeat appeal for attention over the summer, when he recited a poem about a beaten-down boxer at a museum in Rome.

“It’s been a pretty good year, and I’m grateful to have my health back,” he continued. “And in light of that, I’ve made some changes in my life and I’d like to invite you to join me.”

The video, titled “KTWK,” acts as a strange plea for kindness toward the disgraced actor.

“As we walk into 2020, I want to cast my vote for more good in this world,” he said. “Ah yes, I know what you’re thinking. Can he be serious? I’m dead serious. And it’s not that hard, trust me. The next time someone does something you don’t like, you can go on the attack. But you can also hold your fire and do the unexpected. You can kill them with kindness.”

Spacey has been entirely absent on social media since last year’s post. As indicated in the latest video, Spacey continues to be a pariah in the entertainment industry, marking a swift downfall for the actor known for his work in such films as “American Beauty” and “The Usual Suspects.”