Damon Lindelof ambitiously tackles how individual people are wrecked by history, but "Watchmen" lacks the focus necessary to the task. 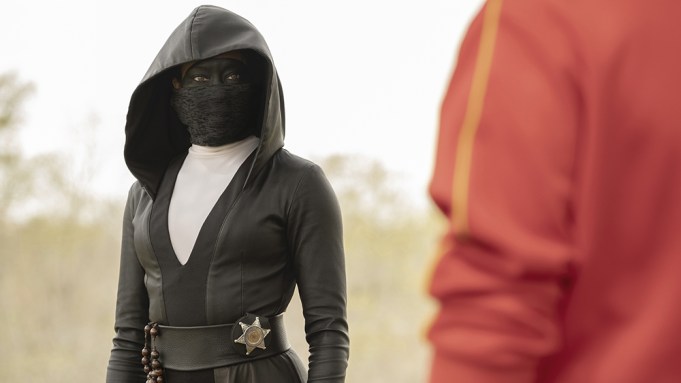 “Watchmen,” the 1980s DC Comics series whose popularity demands adaptation and whose singular vision makes that near-impossible, might be too much itself to bring out the best in any artist. But it has brought out the most in Damon Lindelof.

As a follow-up to HBO’s “The Leftovers,” Lindelof returns to the cabler to remix and reinterpret a piece of the modern pop-culture canon, writer Alan Moore and artist Dave Gibbons’ serial about caped and costumed heroes in hiding. “The Leftovers” provides a good case study as to what “Watchmen” fans are likely hoping for: Using as loose source material Tom Perrotta’s quiet literary novel about the aftermath of tragedy, Lindelof extrapolated wildly inventive metaphors and wrote all the way past the end of the world. That show was a strange miracle, perched as it was on the right side of the precipice dividing mysteriousness and inscrutability. With “Watchmen,” Lindelof dives in, super-powered only, perhaps, by his faith in the audience to keep watching.

Our protagonist is Angela Abar (Regina King), whose role as a Tulsa police detective is her second of three identities; to the public, she’s a retired cop and professional baker, the better to shield her from a growing vigilante movement’s anti-police violence. Some 27 years into the presidency of Robert Redford (a showy — and oft-emphasized — nod to the alternate-history roots of the story), society is riven by unrest that necessitates cops wear masks, just as do the white supremacists who pursue them. Confronted by a mysterious old man (Louis Gossett Jr.) with a long memory and violent grievances, Angela takes on a third face, turning vigilante herself in a series of night missions she can’t govern or control, ones that promise to bring her deep insight about the intersection of America’s racial history and her own. It’s either an extended breakdown or a journey through Lindelof’s vision of American history.

Angela is not a character in “Watchmen,” the comic. The themes the TV series plays with, too — the upside-down vision of a world in which the police are the victims of white supremacy, rather than, as is often the case in our world, its enforcers — would come as news to Alan Moore, too. What remains is a tone of mournfulness, applied on page to the state of the world and onscreen to more specific contemporary concerns. In both properties, the sort of lone-wolf law enforcement we celebrate when it’s done by Superman or Captain America has been driven to society’s margins, been warped and made chaotic and nightmarish in shadows. What 2019’s “Watchmen” does with that broken sort of heroism is to further refract it, to look at stories that expand beyond Angela’s into the long-tail legacy of segregation and anti-black violence, and into the aftermath of hearts broken by lost love and by history’s toll. We go all the way to the moon, for a moment, but we find ourselves returning, again and again, to the vexed town of Tulsa, quintessentially American in its history and its hatreds.

The ambition on display here is pleasing and, if not new for Lindelof, then new for “Watchmen”: 2009’s film adaptation, helmed by Zack Snyder, plodded painfully through its story’s beats without any of the source’s dark wit. That film, too, lacked the sense this property at its best evinces, that of the ways individual people are wrecked by history even as they affect meaningful change on it. It’s paradoxical, then, that HBO’s “Watchmen” grows frustrating in its unwillingness or inability to offer anything but that. Angela carries with her traumatic memories of anti-cop violence against herself and her colleagues — it’s a haunting that King, a recent Oscar winner known to TV fans for her similarly tough and gritty work on “The Leftovers,” carries off beautifully. (The trick is that she is always forcing herself forward even as she’d rather dissolve.) Angela’s colleague, who goes by Looking Glass (Tim Blake Nelson), has designed a costume that reflects the world back, within which he shudders at memories of surviving cataclysm. And Laurie Blake (Jean Smart), a superheroine-turned-FBI agent who heads to Tulsa on assignment, can’t let go of a romance she enjoyed in a previous timeline, or another life.

It’s not that we don’t know Lindelof can do this: Indeed, his structuring of the Blake-centered episode around a phone call Smart delivers in short, mordant, ultimately heartbreaking pieces is both virtuosic and typical. (Losing the element of surprise is an occupational hazard of genius, perhaps.) But it grows wearying to watch episode after episode of a project that so heavily borrows from its source material a tone of grandiose, baroque unhappiness. That “Watchmen” finds within the graphic novel a story about modern race relations is both admirable and probably wrongheaded, an element that the show more successfully whispers than shouts about. King’s scenes with a superior played by Don Johnson, all bonhomie and insincerity, are excellent; her research at an African American history museum led by a virtual Skip Gates less credible.

“Watchmen” would not be “Watchmen” if it didn’t take place in an alternate reality — one in which the presidential cycle was disrupted when Nixon got a third term and in which the Cold War only ended because a giant squid destroyed Manhattan, forcing the world to unite against an unknown threat. It’s easy to admire its audaciousness, then, in centering a story of the racism that thrives in our America, too; even when you toggle between realities, certain facts are too ingrained to escape. A lengthy flashback to midcentury America could be ripped from an Oscar-season race-relations drama set on our planet. Is it ungenerous, though, to wish that — somewhere in the show’s early going — the show had found a way forward other than simple documentation? By the end of the show’s sixth hour, we have had the problem of the show’s world, and our own, reiterated to us many times over. Not even a heroine as resourceful as Angela even makes a first step toward complicating, let alone solving, a situation that’s too frank and too ugly even for a superhero story that prides itself on subversion.

With the central plank of his story defying the sort of metaphorical representation that has characterized his best-known work, Lindelof keeps scribbling in the margins, adding in more and more story that may yet pay off but that takes perhaps undue patience in the interim. A mysterious, seemingly omnipotent trillionaire played by Hong Chau and a brilliant fellow of concealed and foreshadowed identity played by Jeremy Irons bulk out the running time with ominous mutterings; James Wolk floats in and out as an eerily pleasant U.S. Senator. All this addition tends towards subtraction, distracting from the center of the story and making its context increasingly flimsy even despite the tone of exaggerated gravity. To tackle the meanness and violence of history in a truly serious way — with superheroes or with mere magnificently brave mortals telling the story — demands a focus “Watchmen” simply lacks, and attempts to make up for with a tone of increasing dudgeon. What “Watchmen” sets out to do, taking the opportunity of an artwork perceived as unadaptable and writing a whole new story, is admirable. But both that original artwork and, more crucially, this story deserve better. They deserve, perhaps, less.