The HBO comedy tries to stay ahead of the times with Selina Meyer running for president. 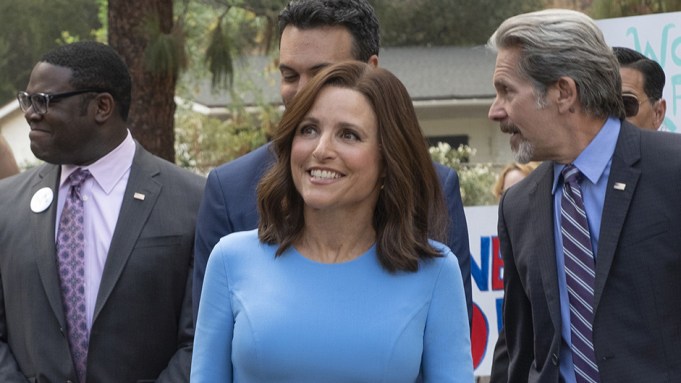 Once upon a time, “Veep” was cathartic. When it premiered in 2012, it made the nasty subtext of government clashes, usually relegated to back chambers and CSPAN, excoriating text. It decoded the grim smiles of politicians in the most cynical way possible, laying bare the ways in which they can twist the system in order to fit their most basic, selfish needs. Running for office and maintaining power, “Veep” insisted at every turn, require inflated egos and incredible ruthlessness, just as the rest of us plebes may have always suspected.

But its final season is bowing in 2019, three years after Donald Trump became a leading force in politics and blew the conventions of political theater wide open. The time-honored tradition of passive aggression couldn’t win out over his extreme aggression towards everyone and everything that stood in his way, and so here we are in this grave new world of overt hostility. The cast and creatives of “Veep” have had to answer a million questions about how prescient the show was about our current mess, but in the most crucial ways, “Veep” didn’t, in fact, see a bombastic showman like Trump coming.

The seventh and final season of “Veep,” premiering March 31 after a two-year hiatus, does its best to adjust to the new times even though it exists in a parallel universe without Trump (and indeed, without specified parties). After creator Armando Iannucci left the series in David Mandel’s hands, the listless sixth season saw Selina Meyer (Julia Louis-Dreyfus) stranded in civilian life after an embarrassing White House flameout; both the characters and show itself seemed lost at sea.

But this last batch of episodes refocuses by turning to the singularly ridiculous process of launching a presidential campaign — a smart pivot that suits the show well, especially for a final season. (After all: no matter how endless a campaign might seem, it will come to a definitive end, one way or another.) It also gives the ace supporting cast plenty of opportunities to have some eleventh hour fun as their characters scramble for the kind of glory that seemed impossible in season 6.

Particularly sharp this year are Anna Chlumsky as Selina’s right-hand woman Amy and Reid Scott as ex-morning show host Dan, both more ruthless than ever even as they’re reluctantly feeling their age. Gary Cole and Kevin Dunn as Selina’s exhausted experts remain a solid pair to counterbalance everyone else’s mania, as does Matt Walsh as Selina’s hapless communications advisor, now on the outs and working as an overwhelmed reporter for Buzzfeed. And as Jonah, a gangly congressional aide turned unlikely congressman turned unlikelier presidential candidate, series standout Timothy Simons gets to tap into the particularly weird sideshow of a fringe campaign — and the unnerving speed with which enough attention can legitimize it.

On the other side of the morality spectrum, bagman Gary (Tony Hale), wandering aide Richard Splett (Sam Richardson), Selina’s daughter Catherine (Sarah Sutherland) and daughter-in-law Marjorie (Clea DuVall) skirt the borders of the political maelstrom, their sporadic decency both complementing and highlighting the depravity within. Best returning guest star honors, an inevitably hard-fought battle in this final season, so far go to Hugh Laurie as Tom James, Selina’s erstwhile rival and most fervent flame.

In the first few episodes of the new season, pretty much everyone in the “Veep” cast gets a moment in which to show off the breadth of their skill, ripping into the show’s signature waterfalls of profanity with relish. Selina on the campaign trail is a familiar mode for the show and one it does well. Louis-Dreyfus now wears Selina’s calculating desperation like a second skin, making moments like her ripping apart the new, warm and fuzzier vanguard of her party both familiar and startling in the best ways.

But seven seasons in, much of the novelty of “Veep’s” signature viciousness has worn off. It’s not necessarily the show’s fault that it now exists when the politics of cruelty rules the day, but it does, and the strain of trying to parody it shows. The series’ response to the hyperbolic times largely seems to be upping the ante of its own ferocity to match, but that can only sustain a scene for so long before it flatlines from exhaustion. There’s nothing gained from watching Selina and her cohorts breathe a sigh of relief when a mass shooting happens to overshadow their latest disaster, except perhaps further confirming that they’d stoop to anything to win. We already knew that; so what now?