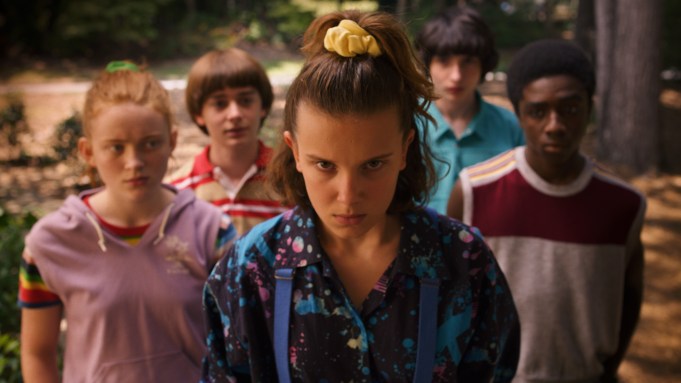 The debut of “Stranger Things” in 2016 marked the first real, huge streaming TV phenomenon. Other Netflix shows had made an impression before: “House of Cards” in 2013 and “Orange Is the New Black” shortly thereafter proved that streaming was coming for cable’s gig, hard. But it was the nostalgia grabs and exhilarating monster chases of “Stranger Things” that truly exploded in the zeitgeist — which is the only concrete factor we have to go on, given Netflix’s famous reticence to disclose viewership numbers.

Without a ton of pre-release press (the better to maintain its mystique), the Duffer Brothers’ “Stranger Things” seemed to pop out of nowhere — a burst of a summer blockbuster sliced into palatable “chapters” like an addictive page-turner of an adventure book. Its 1983 setting, complete with myriad throwback references, was perfectly calibrated to tap into the significant strain of TV and movie fans who yearn for the onscreen “Goonies” adventures (or even star Winona Ryder) of their youth. For a while it was just about impossible to escape the show’s signature images: an intrepid Dungeons and Dragons party (played by Finn Wolfhard, Noah Schnapp, Caleb McLaughlin, and Gaten Matarazzo), a frantic mother (Ryder) and surly sheriff (David Harbour) decoding a wall of blinking lights, telekinetic heroine Eleven (breakout Millie Bobby Brown), glaring with a shorn head, steadily bleeding nose, and perhaps an Eggo waffle for extra strength.

The second season, which dropped on Halloween in 2017, tried hard to capture that original magic with a couple extra twists in the forms of hothead bully Billy (Dacre Montgomery) and his spunky kid sister Max (Sadie Sink). But the fact that the season was so highly anticipated inevitably spiked expectations so that when “Stranger Things” stumbled with a classic sequel blunder (“what if we did the same thing people loved so much last time, but bigger?”), it was even more of a disappointment.

Enter Season 3. While “Stranger Things” will always have its diehard fans, this season has far more to prove about the show’s overall longevity than any other. Debuting almost two years after season 2, but taking place several months after, the scrappy kids we first met three years ago are now gangly teens struggling to reconcile their childhood passions with their flailing hormones. Opposites-attract couple Nancy (Natalia Dyer) and introvert Jonathan (Charlie Heaton) are spending their summer interning at the local paper, while exiled prom king Steve Harrington (Joe Keery) rolls his eyes scooping ice cream at Hawkins’ shiny new mall. Cary Elwes, an actor dogged by nostalgic fascination not unlike Ryder, taps in as the town’s slimy mayor and perpetual Hopper adversary. Hopper himself (Harbour) is gritting his teeth while Eleven, now officially dating Mike (Wolfhard), tests his patience and “keep the door three inches open at all costs” rule.

As for what actually happens in season 3…well, it’s almost impossible to say. Literally. The list of “do not reveal” spoilers Netflix sent alongside advance episodes is as long as it is strategic, prohibiting me from so much as hinting at who (or what) the determined citizens of Hawkins, Indiana are up against this time. The less the “Stranger Things” audience knows going in, the more exciting its twists and turns may be, so goes the wisdom following the first season’s success.

What I can reveal is that by the time the final credits roll on season 3 (plus a post-credits scene you won’t want to miss), it’s made much more of a case for itself than season 2 ever did simply by trying to be something different. The mall especially proves to be a rewarding new location that sets the stage for more inventive battles. Even displacing the action from the spooky grays of late fall to the saturated heat of midsummer shifts the tone and challenges the directors to convey creeping unease through Technicolor sweat. Later scenes set in the manic frenzy of a Fourth of July carnival are so vivid you can smell the popcorn and funnel cake.

The summer 1985 setting also emphasizes time has irrefutably passed, and season 3 does interesting work as it grapples with that fact. For one: Will (Schnapp), traumatized from his time in the Upside Down and always the group’s most tender member, tries to slow his friends down as they obsess over girls. Steve tries to find his place in the world outside a high school hierarchy, challenged all the while by his unimpressed coworker, Robin (Maya Hawke). Max, a well-intentioned character who nonetheless often acts as a cipher for the ones around her, takes on the task of befriending and empowering Eleven, who’s still trying to find an identity all her own. (Does this include a shopping montage to “Material Girl”? You know it!)

Three seasons deep, “Stranger Things” is also more comfortable leaning into character combinations that have proved successful in the past — like the enthusiastic odd couple pairing of Steve and Matarazzo’s Dustin — in order to break up the action into separate stories that eventually converge. Before their inevitable final reunion, the core cast is split into four factions with varying degrees of success. On the frustrating side lie Dyer and Heaton, solid but uninspired in an investigation that takes its sweet time connecting to everyone else, and Ryder and Harbour, who have a prickly chemistry that proves grating when isolated. (It’s unclear why Hopper also tends to cross the line from “charming grump” to “sour jerk” more this season, but he sure does.) Conversely, Sink and Brown tap into a giddy energy that makes a forced friendship feel more elastic and real, while Priah Ferguson, playing Lucas’ wry younger sister Erica, quickly justifies her convoluted entry into the main cast. Keery, who boasts the show’s best comic timing by a mile, gets a worthy scene partner in Hawke; their growing friendship is one of the season’s unequivocal highlights.

Beyond that, there’s not much more I can say without incurring the wrath of Netflix’s Spoiler Upside Down. But rest assured: if I went into season 3 wondering how long “Stranger Things” can possibly keep this up, I left it assured that as long as the series keeps pushing beyond what initially made it work, it will have more story left in the tank yet.