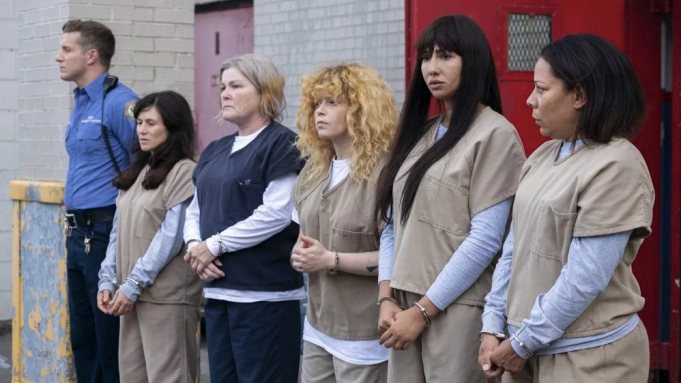 It’s easy to forget now how singular “Orange Is The New Black” is in the grand scheme of TV history. With its prison setting and focus on women who rarely get the spotlight, the Netflix drama changed the game by testing the limits of what streaming television could — and should — do back in 2013, when Netflix was still best known for DVD deliveries. In the six(!) years since it first debuted, it’s become such a fixture that saying goodbye to the women of Litchfield Penitentiary for good feels downright surreal.

The weight of having to wrap everything up wears on the seventh and final season of “Orange Is The New Black,” especially given just how many characters there are to send off and how wild the plot turns have gotten since the beginning (remember the season-long prison riot?). For as impossible a task as tying every loose end is, these last 13 episodes acquit themselves fairly well. But repetitive flashbacks and a couple hugely ambitious new plots unbalance the season and cause the series to make a shakier landing than it might have with some sharper focus.

As in the first season, Piper (Taylor Schilling) provides the framework. This time, she’s trying to navigate life outside of prison, which is far more challenging and frustrating than she ever expected — especially without her new wife, Alex (Laura Prepon), who still has three years left on her sentence. The show’s smart to show Piper’s struggles to get on her feet while withstanding all the systemic obstacles that come with a felony record, though as her new probation officer (Alysia Joy Powell) points out with barely concealed annoyance, she has several legs up that the vast majority of recently released inmates never get. And just as with the first season, Piper’s story just isn’t as fresh or compelling as those of everyone she left behind in prison — even (especially) given her tortured romance with Alex, which wore out its welcome a few seasons ago. This becomes even clearer given a parallel storyline with Cindy (Adrienne C. Moore), whose roadblocks are far more comprehensive.

Inside Litchfield, onetime boss Red (Kate Mulgrew) finds herself irreversibly shaken after an extended stint in solitary, while standout Suzanne (Uzo Aduba) stays largely on the margins with cellmate Pennsatucky (Taryn Manning). Aleida (Elizabeth Rodriguez) and Daya (Dascha Polanca), the show’s most dysfunctional mother and daughter pair in a show overflowing with them, find new and inventive ways to make each other (and themselves) miserable. The most compelling storylines still belong to reluctant mother hen Gloria (Selenis Leyva), recovered addict Nicky (Natasha Lyonne), and Taystee (Danielle Brooks), whose tragic arc is arguably the most dynamic and crucial of the entire series, whether or not the series always knows it. It’s no coincidence that Levya, Lyonne, and Brooks are three of the show’s strongest actors; when given material worthy of their talents, they’re magnetic. Brooks especially cements her status as the show’s most emblematic lead as she tackles the challenge of portraying Taystee’s overwhelming nihilism after a jury wrongfully convicted her of murder.

With as many inmates as “Orange” juggles every season and has to re-visit in its final hours, though, there are frankly still too many times when the focus turns to guards and wardens past and present, with the tone shifting wildly to accommodate them. McCullough (Emily Tarver) becomes less of an enigma, though a nuanced flashback to her time in combat unfortunately devolves into a soapy mess in the present day. Taystee’s former friend Tamika (Susan Heyward) fares a bit better as she digs her heels in to try and make things better, largely thanks to Heyward’s portrayal. Meanwhile, Caputo (Nick Sandow) and Fig (Alysia Reiner) are trying to achieve the closest thing to domestic bliss that they know how, gritting their teeth through the private prison system’s horrifying demands of them. This only gets more complicated when Caputo’s former coworker (Lauren Lapkus) shares her discomfort with how he treated her while he was her boss. It’s a potentially rich twist, especially because Caputo somehow ends up with one of the most pronounced redemption arcs, but the show nonetheless fails to see it through without more input from the woman herself.

The trickiest storyline, however, belongs to a frightening and undeniably timely one that takes place in an immigrant detention center where women from Central America to the Middle East and beyond are stuck with cocky ICE agents, and without any answers or real hope of getting the better life they were initially seeking. “Orange Is The New Black” takes this loaded detour seriously. The endless ways in which the United States’ immigration “system” can morph to screw anyone out of a decent outcome, both legal and illegal, are shown in appropriately horrifying detail, and to say that happy endings are “few and far between” would be vastly overstating the case. But even though this aspect of the season was teased in the season 6 finale, it’s hard to shake the feeling that the show really needed to introduce it far earlier in order to give it enough room.

A few characters Netflix requests I don’t mention are involved in this storyline — and are anchored by some seriously good acting, so it’s a real shame I can’t name them quite yet — but none of the new characters get the kind of revelatory multi-flashback treatment that past ones have. We never get to know them much beyond their trauma. It’s a shame, especially because this kind of deeper characterization of women many would otherwise dismiss out of hand used to be “Orange Is The New Black”‘s strongest suit. If this were the penultimate season, there would be more of an opportunity to expand upon the enormous questions of culpability that this plot raises, but as a final season digression, it’s simply too big to resolve amidst everything else.

And yet: there is something to be said for “Orange” diving into immigration and emphasizing the very real human cost of the toxic debate raging on today. No other TV show would, or could, do so quite on this level — which is, of course, exactly what has made the series such a landmark achievement. It leaves behind a television landscape that looks nothing like the one in which is premiered, and the medium as a whole is better off for it.

“Orange Is The New Black” premieres July 26 on Netflix. (Drama, 60 mins; 13 episodes, all watched for review.)