TV Review: ‘The Mandalorian’ on Disney Plus

'The Mandalorian' is a grim Western of a show that’s less concerned with capturing the magic of 'Star Wars' than roughing it up a bit. 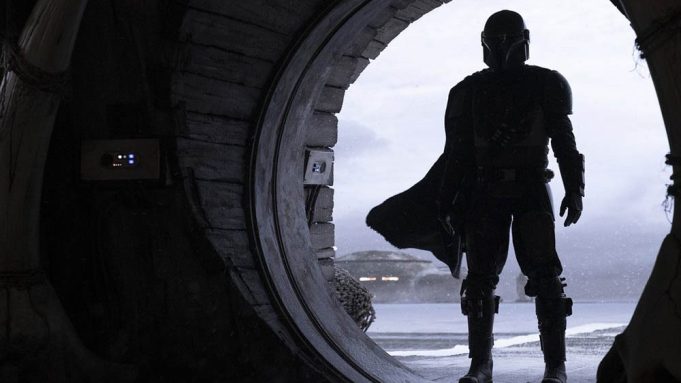 SPOILER ALERT: This review discusses some spoilers for the first episode of Disney Plus’ “The Mandalorian.”

A vicious killer with a tragic past and the faint glimmers of a beating heart is no stranger to television, a medium particularly suited to telling winding stories about rises, falls and redemptions. And yet it’s still something of a jarring trope to center “The Mandalorian,” the first live-action “Star Wars” TV show and the marquee original series for Disney Plus, which launched in the witching hours of Nov. 12 in an explosion of Technicolor classics, obscure childhood favorites and blockbusting properties.

Every other Disney Plus original to debut, including reality shows like “Marvel’s Hero Project” and the aggressively meta comedy “High School Musical: The Musical: The Series,” run on optimism, selling the Disney brand as unfailingly aspirational. In introducing a “Star Wars” series along with it all, it would have been completely understandable if it were a romp that leaned more into a popcorn-ready “Return of the Jedi” vibe than the sinister politicking of “The Empire Strikes Back.” (Or, in new trilogy parlance, more of a “Force Awakens” tone than “The Last Jedi.”) If Disney Plus had kicked off its inaugural wave of “Star Wars” content with a “Muppets”-style sitcom about bored Cantina bartenders, I wouldn’t have been the least bit surprised (or, for that matter, disappointed, because that actually sounds awesome). But at least in its first episode, “The Mandalorian” is a grim Western of a show that’s less concerned with capturing the magic of “Star Wars” than roughing it up a bit. Even when “The Mandalorian” lags, its swerve from a more expected route makes it more intriguing as an entryway into a galaxy far, far away.

Jon Favreau’s new swing at the “Star Wars” universe picks up sometime after the fall of the First Galactic Empire in “Return of the Jedi” and before the events of “The Force Awakens,” at which point the hot new fascist power of the First Order has already taken back over. (As for how much a viewer needs to know or remember about the details of the original trilogy, I watched “Empire” and “Return of the Jedi” as a quick refresher course, but upon watching the first episode of “The Mandalorian,” even that wasn’t completely necessary.) With its blessedly brisk 40-minute runtime, the glimpse the “The Mandalorian” pilot gives us of this heretofore unknown in-between period is slight, but revealing. With no one in charge, the rules of law barely exist, meaning that underground dealings and individual firepower are even more powerful commodities than before. The first episode doesn’t give away much in the way of world-building logistics beyond some basic discussion of currency — but the possibilities, as they say, are endless.

One point in the show’s favor is that it homes in on a single story, the better to keep it grounded. It follows a seemingly tireless bounty hunter from the planet Mandalore (i.e. “The Mandalorian”), who spends his days scraping together low-paying assignments that have him ricocheting around the galaxy to scoop up bail-jumpers and preserve them in carbonite before they can wriggle away again. To the tune of Ludwig Goransson’s richly textured score of sparse Western motifs and melodramatic tone shifts, the Mandalorian stalks silently through crowds, drawing wary attention wherever he goes despite his stoicism.

That resolute lack of emoting makes the Mandalorian both a bold choice as an anchoring character and a frustrating one, especially since he’s played by the endlessly charismatic actor Pedro Pascal. That holds doubly true as it becomes clear that the Mandalorian, like Boba Fett before him, never takes off his helmet — not for his boss (Carl Weathers), nor his mysterious ally (Gina Carano), nor his most intimidating client (Werner Herzog). We never even see him reveal himself for himself. And his world, no matter which world he’s on, is monochromatic.

Over the span of the first forty minutes, we see the Mandalorian staring down endless frozen white tundras, sweeping terracotta deserts, dingy brown bars. (To give credit where its due: the cinematography and production design of these scenes are fittingly gorgeous for a series with such a high budget, especially with Dave Filoni’s directing providing a steady hand throughout.) In fact, until the very end of the first episode, the Mandalorian remains as monochrome as his surroundings, making moments when he finally betrays some semblance of personality — most especially when he’s frustrated with Taika Waititi’s matter-of-fact bounty hunter droid — even more precious.

“The Mandalorian” bears the burden of heightened expectations and salivating anticipation from the millions of diehard fans who have made the “Star Wars” franchise so inescapable over the years. As such, the show has to justify its existence in a different way than most new series do, at which the first episode does a decent job. Someone who doesn’t care for “Star Wars” likely won’t care for “The Mandalorian,” but the setup is rooted in enough tropes that its story remains accessible enough to anyone who might be interested. The Mandalorian’s newest, most dangerous mission also brings him face to face with a recognizable and truly unexpected character, one whom should make even the most casual “Star Wars” fan will raise an “oh really?” eyebrow. It’s the kind of reveal that indicates that the Mandalorian could have played a crucial role leading up to the events of present-day trilogy, particularly the concluding “Rise of the Skywalker” chapter that hits theaters this December.

And yet: It also could just mean that the Mandalorian found himself in an extraordinary position that nonetheless may relegate him to the footnotes of history — which, all things told, is exactly the kind of character that should be driving “Star Wars” TV series. Sure, origin stories for characters we already know and love can be fun. But learning more about the extended universe through characters who aren’t lauded as the greatest heroes and villains of their time — even characters determined to slide somewhere unnoticed in between — could be a much more fascinating and fulfilling use of the TV branch’s time.

“The Mandalorian” premiered Nov. 12 on Disney Plus, with new episodes dropping every Friday.

TV Review: ‘The Mandalorian’ on Disney Plus