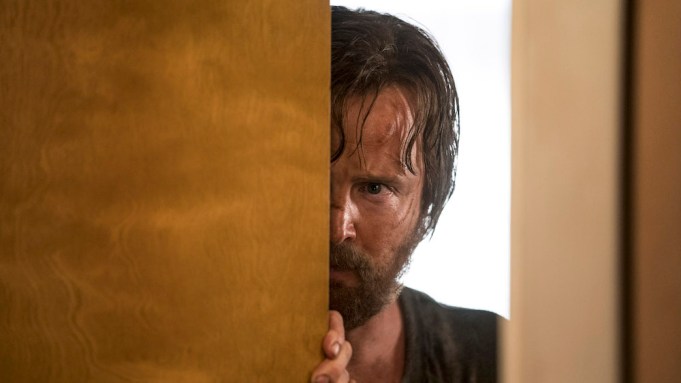 “El Camino,” which begins moments after the events depicted in the 2013 finale of “Breaking Bad,” is startling from nearly its first shot, as one reckons with the fact that Aaron Paul is now well older than Jesse Pinkman. As Pinkman — the young naif turned assistant meth cook turned slave whose liberation from literal shackles provided one of the most resounding moments of triumph in that series’ final installment — Paul is, now, harder-looking, perhaps a bit thicker, wearier than ever before.

A small part of that is the work of the show itself; after being shaved and cleaned up, Jesse’s face is revealed to be scarified by his captors in ways facial hair had hidden and memory may have elided. And a larger part is time — six years older than he was at show’s end, when he was playing someone just barely out of his teens, Paul at 40 holds the screen in a new way now.

This serves the character, one who has every reason to have aged more than six years during his time in captivity. And it helps “El Camino,” a mixed-bag continuation that undermines “Breaking Bad” nearly as often as it provides succor for fans, make its most elegant and oblique points. After all, an older-seeming Jesse is the one that the events of “Breaking Bad” have produced. A character’s throwback mention of one of Jesse’s giddy outbursts from the show’s run feels, with a resolutely un-giddy Jesse in frame, like a story not just from a different era but about a different person.

So it is: This Jesse is shorn both of friskiness and of anything outside his tunnel-vision understanding of what he needs to do to get free. This story follows Jesse as he works to break himself not only of any last associations to the underworld he’d too long dwelt in but of what inner hauntings remain. “El Camino” is notionally named for the car he drives away from “Breaking Bad’s” final conflagration, but its title’s obvious double meaning — it translates to “the way”— generates the story’s real juice. Jesse needs to deal with loose ends and also to find a path toward redemption.

That journey is told with flair, if not always much wit or irony: Jesse has been through the darkest parts of “Breaking Bad,” and thus the show’s occasional levity has no place in his narrative now. There’s a momentum to his story — it has a heist-movie-style checklist, carried out by a team composed of only one — that has its own satisfactions, and set-pieces with real tension, even if they lead to a less-than-novel place. (Robert Forster, as a man who helps people disappear, is a welcome returnee from the world of “Breaking Bad,” but his assistance being the final step of Jesse’s quest feels surprising in its lack of surprise.) Vince Gilligan, the show’s creator and the film’s director and writer, makes use of a presumably robust budget and of the fact that “El Camino” will be exhibited on some big screens with some genuinely gorgeous shot making.

Yet there’s an obviousness — one that haunts the long-tail legacy of “Breaking Bad” — in the title; in flashbacks depicting various “Breaking Bad” characters, all dead in the movie’s timeline, urging Jesse forward; in Jesse’s action-hero clarity of purpose; and in the resounding gruesomeness of the abuse he is shown to have suffered at the hands of his masters. To wit: Jesse Plemons’ performance as Todd, the worst of Jesse’s tormentors, was of career-making interest on “Breaking Bad” for the degree to which it seemed random, an evil borne from nothing at all. Shown at far greater length in flashbacks interspersed throughout “El Camino,” Todd’s assaults come off as that most toxic of things: desensitizing.

“Breaking Bad” was not a show whose great strength was its subtlety. And yet the story it told moved on a gradient, depicting the growing monstrousness of meth maestro and Pinkman partner Walter White (Bryan Cranston) and Jesse’s increasingly frantic confusion at how to handle living in the reality Walt created. “El Camino” happens after a terminus, and its emotional arc, such as it is, is infinitesimal, moving from extreme trauma and exhaustion to its slight amelioration through the completion of various tasks. A cut, early in the film, from Jesse’s escape by car to a first-person driving video game being played by his friends and last remaining allies (Matt Jones and Charles Baker, welcome presences as the only purposefully funny performers in the proceedings) is instructive. Driven by inner rage and by the requirements of a story stretching its limits, Jesse feels at times more avatar than person.

Such bluntness and such prioritization of the story’s scheme over the character are more and more a part of the “Breaking Bad” universe. After a finale in which Walt was, as if by magic, granted a conditionally happy ending — with security for his family, triumph over the more monolithically evil characters and freedom for Jesse — Gilligan has continued embroidering on the story’s edges. It’s an outcome that has been welcomed by fans, even — or especially — as a finale that gives fans everything they want has indeed left them wanting. Elsewhere, spinoff series “Better Call Saul” began its life by asking genuinely provocative tangential questions about what it means to make moral slips far less seismic than making and dealing meth, and what sort of person chooses to avoid redemption. The show has waned in interest as it delves further into the “Breaking Bad” mythos; little story about characters from that series remains to be told in a compelling and original way.

So it is with “El Camino,” which presents a Jesse who’s aged into a bitterness that’s understandable, if not quite dimensional enough to support a movie without endless restatement of just how much he’s suffered. Gilligan is shrewd enough, amid so much pain, to provide a dose of fan service — Walt and Jesse together again and, better yet, in happier times, via a late-in-film flashback in which Walt advises Jesse that a remarkable future lies ahead of him. Jesse could go to college or, Walt says, practically teach a college course, so expert is he in business now.

This being Walt, one of the most self-justifying characters in modern TV history, it would be ungenerous to read the exchange solely on its face. And yet there seems — based on its placement near the end of a gauntlet of trials that bring Jesse almost all the way to independence — a very hefty dollop of uplift intended here too. Jesse has transcended the hell Walt brought him to, and emerges from it bolstered by the fact that Walt believed in him (once, long ago, and in a flattering way intended to soak Jesse for his talents and connections). For a second time, “El Camino” lets one of the TV protagonists most deserving of a real reckoning off the hook.

But the film is merciless with Jesse, and to its benefit: His character emerges most clearly, through the shrouds of anger and grief, when he is placed in situations where the easy way out would be a killing. This is not to say he doesn’t do harm in “El Camino,” but more often, he seems to beg for an opportunity to set himself right without setting someone else wrong. It’s a character choice that’s suffused with a deep understanding of what came before, not just in the story but within the soul of a man whom we remember, from years ago, as young in every particular. “El Camino” makes choices that limit its success and that don’t serve the legacy of “Breaking Bad.” But its arrival at a place of wholeness after two hours of painful anxiety suggest that, though the path Gilligan and company took was at times a dubious one, “El Camino” can’t, finally, be said to have lost its way.