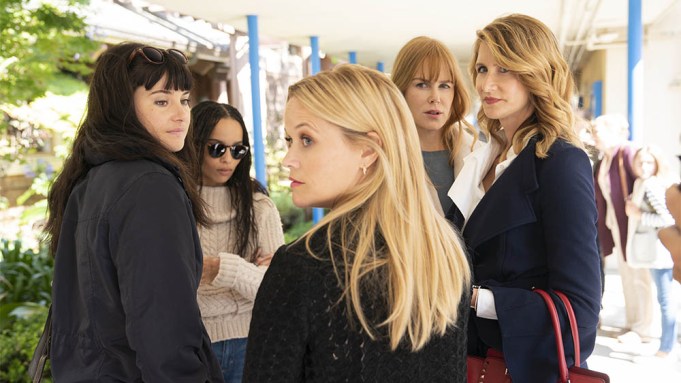 The final scenes of “Big Little Lies’” first season were about as good as TV gets. The slow motion horror of its fatal climax, the sigh of catharsis left in its wake, and the camaraderie between the women at the center of it all made for such sharp, elegant television that it seemed like a given that it was, indeed, the end. Even beyond the fact that they by and large told the entire story of Liane Moriarty’s original novel, the initial seven episodes of “Big Little Lies” felt so complete that the idea of coming back for another round seemed like an excuse to regroup its admittedly titanic cast — including Laura Dern, Shailene Woodley, Zoe Kravitz, and executive producers Reese Witherspoon and Nicole Kidman — for the fun of it. So now, two years after it first debuted, “Big Little Lies” is back for a second season with a palpable sense of understanding that it needs to underline why a return to the women of Monterey was necessary.

The first three episodes of this season — which will again include seven chapters in total, this time directed by Andrea Arnold — quickly abandons the idea of Celeste (Kidman), Madeline (Witherspoon), Renata (Dern), Bonnie (Kravitz), and Jane (Woodley) being the tight-knit group of survivors that the Season 1 finale depicted (even though their gossipy neighbors have taken to calling them “The Monterey Five”). While last season’s final shot of them relaxing on a beach with their kids promised a new fidelity forged in a terrible shared secret, the Season 2 premiere picks up several months later with them all more scattered than ever. The premiere feels especially fragmented in its efforts to run down everyone’s emotional standpoints; scenes hardly get a chance to get going before moving. And as for how they’re dealing with the fact of racking up a body count, the only ones who seem to be actively grappling with it are Bonnie, the one who actually pushed Perry down the stairs to his grisly death, and his grieving mother Mary Louise, played with a disquieting smile by none other than Meryl Streep. Sometimes it feels as though the show is trying to forget the secret of how Perry died as hard as its heroines; when Madeline keeps asking Bonnie “what’s wrong,” it’s hard not to raise a skeptical eyebrow right alongside her.

“Big Little Lies” quickly proves that its primary worry isn’t the latent concern that someone might find out about the colossal lie at its center. It’s far more interested in sifting through the visceral aftermath and continuing to untangle the ferocious knots of shame, fury, and melancholy strangling just about everyone — whether they want to admit it or not.

Celeste is torn between relief that she no longer has to fear the abuse of her husband Perry (Alexander Skarsgaard) and the sick thrill and associated shame of wanting him back. Jane now knows the identity of her rapist, but still has to work through her lingering trauma, while Renata finds herself helpless and raging from within her own worst nightmare at home. Madeline refuses to believe she’s cracking under the pressure of pretending everything’s okay, but is sorely tested when her husband Ed (Adam Scott) realizes just how much she’s been keeping from him. Bonnie, always the most disconnected from the other four, is sleepwalking through her life alone, simply because she doesn’t know what else to do.

All the actors rip into their storylines with the depth we’ve come to expect, and all their characters’ reactions to the events of last season track (Bonnie especially has no reason to trust these women who never offered her the same courtesy before). Nonetheless, the beginning of this season suffers from separating them so much; it’s no coincidence that many of the best scenes involve Celeste and Madeline just bonding together in one or the other’s car, supporting each other and sharing their fears more openly than ever. Again writing all seven episodes, David E. Kelley’s scripts are at their worst when trying to crack social commentary (a teen who fancied herself progressive would never roll her eyes at college kids “mulling a sex change”), and at their best when digging into the specific longing each character alternately represses and unleashes. A thread about “people in life who content themselves with what they have” and “the wanters” (a designation courtesy of Streep’s slyly vicious grandma) is a particularly poignant follow-up to Madeline and Celeste screaming that they “want more!” in Season 1, one of the show’s best and most revealing moments to date.

Even when Season 2 is messy — and it is, more often than not — the mess at least feels like the point. It would have been easy to leave the story on that beach at golden hour with the triumph of sticking the ending. It’s far harder to imagine what would actually happen the next day, and the next, and the next. Purposefully rooting around that uncertainty and pulling clarity out by its screaming roots is a worthy task that the formidable women of “Big Little Lies” — both onscreen and off — have been preparing to face for a long time.