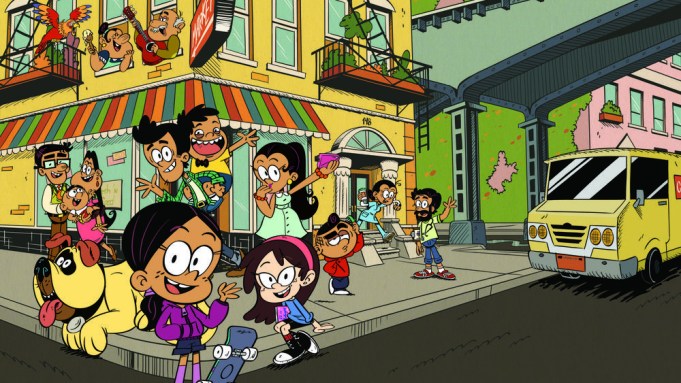 Nickelodeon is expanding the world of its popular toon “The Loud House” with the multicultural spinoff “The Casagrandes,” which premieres Monday, Oct. 14, at 1:30 p.m. ET/PT before moving to its regular timeslot on Saturdays at 11:30 a.m. beginning on Oct. 19.

The new series follows Lincoln Loud’s friend 11-year-old Ronnie Anne Santiago, who moves to the big city with her mother and older brother to live with their multigenerational Mexican-American family, the Casagrandes, over their family-owned mercado. Ronnie Anne and her brother Bobby were first introduced on the first season of “The Loud House” in the episode titled “Save the Date.” The extended Casagrande family appeared during season 2 in the episode “Relative Chaos.”

While the series visually still lives in “The Loud House” world, the design of “The Casagrandes” is deeply steeped in Mexican-American culture with its own color palette and designs.

“I think the color palette is definitely different and it’s something that is consciously and purposefully trying to evoke Mexican-American culture and life in the U.S.,” says executive producer Michael Rubiner, who also exec produces “The Loud House.” “We really relied on the art team and particularly people on the art team who are Mexican American, who really know that world well.”

One of those is art director Miguel Gonzalez.

“We couldn’t change it too much from ‘Loud House,’ because we knew Lincoln and those guys were going to come over to our show, but we did have some freedom with the color. That was the one thing I wanted to change with the show,” he says. “I pulled from Mexican folk art, like Papel Picado and Sugar Skulls, and the pottery and the textiles that you see in Mexico. I studied those patterns and color schemes to incorporate them into the style.”

Supervising director Miguel Puga says “The Casagrandes” is loosely based on his family. “I say ‘loosely’ because it’s a collaboration with myself and the writers. We all get together and pull things from different stuff with our families,” he explains. Puga says that the character of Abuela Rosa, Ronnie Anne’s grandmother, is based on his mother. “Just the way she is strong, makes sure you’re always eating and when she gets mad, she’ll throw you the chancla [shoe].”

Gonzalez says he used his own experiences as well to help create visual world of “The Casagrandes.” “A lot of it comes from my memory from visiting my grandma in Mexico and visiting my uncles’ and aunts’ houses. I try to incorporate some of that into the show.”

The overall looks of both “Casagrandes” and “The Loud House” are inspired by classic comic strips. “Both shows are influenced by vintage comic strips, like the ones you’d find in the newspaper,” Puga says. “It’s the quick, familiar, simple and comfortably warm shapes that we add in the ‘The Loud House’ that you’ll still find in ‘The Casagrandes.’ It’s a lot of little love letters to a lot of well-known comic-book artists like Walt Kelly (‘Pogo’), Hank Ketcham’s ‘Dennis the Menace’ and Charles Schultz’s ‘Peanuts.’ You’ll still see some of the same influences all over ‘Casagrandes,’ but with a burst of beautiful color everywhere and the music and everything in there. I can’t wait for everyone to see what we’re working on here.”

The show’s commitment to cultural representation goes beyond just its design and multicultural crew, but to its cast. The voice cast of the central Casagrande family members include Izabella Alvarez as Ronnie Anne, Carlos PenaVega as her brother Bobby, Sumalee Montano as her mother Maria, Carlos Alazraqui as her uncle Carlos, Roxana Ortega as her aunt Frida, Alexa PenaVega as her cousin Carlota, Jared Kozak as cousin CJ, Alex Cazares as cousin Carl, Ruben Garfias as her grandfather and Sonia Manzano as her grandmother. Additional cast includes Eugenio Derbez, who voices Ronnie Anne and Bobby’s father, a doctor who lives and works in Peru; as well as Ken Jeong, Melissa Joan Hart, Leah Mei Gold and Lexi Sexton as neighbors the Changs.

Says Rubiner: “One of the other aspects of ‘The Casagrandes’ I think is important to note is that it’s not just a kind of Latino show, but also a super multicultural show because the world of the Casagrandes is internationally diverse. The neighborhood they live in has people from all sorts of backgrounds. We consciously made an attempt to embrace that.”

“We’re bringing what real America looks like into this show,” echoes Puga. “You’re going to see all kinds of different diversities in these episodes where whoever watches it can point out a character in the background or point out a character that walks into the mercado and say, ‘Hey, that’s just like me.’ Or ‘Hey, that sounds like my mom.’ Or ‘Hey, that sounds like my brother or my sister.’ We have this opportunity to portray so many wonderful cultures in one show, and we’re going to need at least 30 seasons to do it.”