Continue to Variety SKIP AD
You will be redirected back to your article in seconds
Nov 7, 2019 9:00am PT 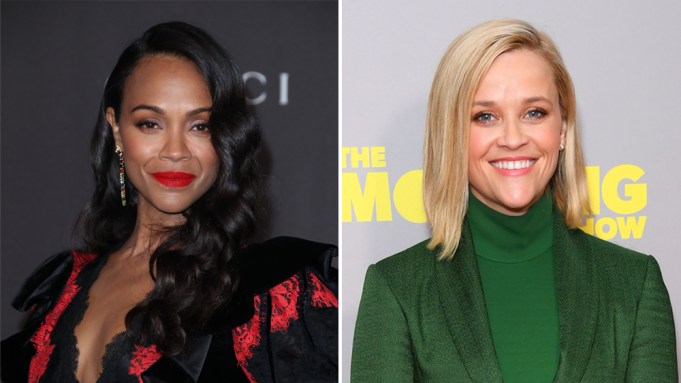 Zoe Saldana and Reese Witherspoon are teaming to adapt Tembi Locke’s memoir “From Scratch” as a limited series for Netflix, Variety has learned exclusively.

Saldana will star in and executive produce the series, which is described as an autobiographical romance that follows an American woman as she falls in love with a Sicilian man while studying abroad in Italy then builds a life with him in the United States. When she unexpectedly loses him to illness, she is challenged to pull herself through grief so she can raise their daughter as they would have raised her together: with hope, joy and infinite love.

“From Scratch” was published in April by Simon and Schuster and was selected as Reese’s Book Club x Hello Sunshine May 2019 book pick. Tembi Locke’s sister Attica Locke will serve as showrunner and executive producer on the series. Attica previously wrote for Ava DuVernay’s Netflix series “When They See Us” and was also a supervising producer and writer on Fox’s “Empire.”

“This is a profound true story of love and family, deprivation and nourishment, that needs to be brought to life on the screen as Tembi Locke brought it vividly to life for me on the page,” said Saldana. “We are grateful to Netflix and thrilled to be working with Reese, Lauren, Attica and 3 Arts on this wonderful project.”

According to an individual with knowledge of the situation, Attica brought the book to Hello Sunshine’s attention prior to its publication when she was meeting with the company regarding another project. Witherspoon then had dinner with Saldana shortly thereafter and sent her the manuscript.

“Tembi’s memoir is a raw and tender exhibition of life in all its pieces,” said Witherspoon. “She brings you into her love, her loss and her resilience with such vulnerability and strength. We immediately fell for Attica and Tembi’s vision and feel honored to have the opportunity to help bring it to life on-screen. We could not imagine more perfect partners for this than Zoe and her sisters and 3 Arts Entertainment, along with the incredible team at Netflix.”

This will mark the first regular television role of Saldana’s career. She is best known for her film work, having starred in major blockbusters such as “Avatar,” the rebooted “Star Trek” films, and the “Guardians of the Galaxy” films. She also appeared in both “Avengers: Endgame” and “Avengers: Infinity War.” Her television credits include “Law & Order,” “Six Degrees,” and the miniseries “Rosemary’s Baby.”

She is repped by CAA, LBI Entertainment, and Morris Yorn.

“Attica and I are honored to be adapting ‘From Scratch’ with the visionary Reese Witherspoon, Lauren Neustadter, Richard Abate and the incredibly gifted Zoe Saldana,” said Tembi Locke. “We have a shared interest in championing stories that bring a rich tapestry of experiences to the screen. I am thrilled that this global love story has found a perfect home at Netflix.”

Witherspoon has been increasingly involved in TV over the past few years, beginning with starring in and executive producing the Emmy-winning HBO series “Big Little Lies.” She currently stars in and executive produces the Apple TV Plus series “The Morning Show” and will star in and executive produce the upcoming Hulu series “Little Fires Everywhere.” She is also an executive producer on the Apple series “Truth Be Told” starring Octavia Spencer and Aaron Paul and the upcoming Amazon series “Daisy Jones and the Six,” with more projects in development. Like “From Scratch,” “Big Little Lies,” “Little Fires Everywhere,” “Truth Be Told,” and “Daisy Jones and the Six” are all based on books, while “The Morning Show” drew inspiration from Brian Stelter’s book ” Top of the Morning: Inside the Cutthroat World of Morning TV.”

She is repped by CAA, LBI Entertainment, and Hansen Jacobson.

“Between the Locke sisters and the Saldana sisters, I’ve never seen a show that’s more of a family affair,” said Channing Dungey, vice president of original series at Netflix. “Reese Witherspoon and Hello Sunshine have been producing really exciting content and we’re thrilled to make this powerful and emotional series with them.”