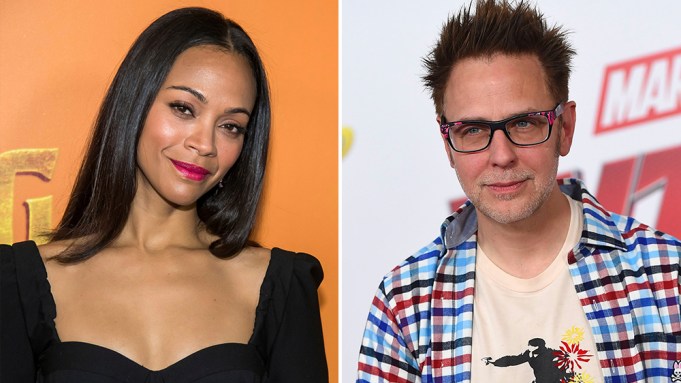 Zoe Saldana is thrilled to have James Gunn back on board for “Guardians of the Galaxy Vol. 3.” Disney reinstated the director, who was fired from the Marvel franchise for offensive tweets, in mid-March.

The studio had fired Gunn last July when controversial tweets from nearly a decade ago resurfaced. The near-dozen tweets, which were said to be jokes, made light of pedophilia and rape. After a series of meetings, and with no replacement on board to direct the third “Guardians of the Galaxy,” the studio made the decision to rehire Gunn last month.

“I’m really excited, and I’m proud of Bob Iger and Alan Horn for stepping up and making a decision to reinstate James Gunn,” Saldana told Variety on Sunday morning at the New York City premiere for her upcoming animated film “Missing Link,” in which she’s part of an A-list voice cast, including Hugh Jackman, Zach Galifianakis and Timothy Olyphant.

“I think the theme of redemption is a theme that we weren’t ready to discuss in 2018 because it was important for women to also strive to make workplaces more ethical and more professional. Not just for women but for men, as well,” Saldana said. “But leaving that space for redemption, for error, and then coming forward with so much humility and saying, ‘We acted impulsively and we’re going to rectify this,’ Disney is a big entity and they make content for younger audiences. You’re sending a strong message to kids, and that, I commend them for it.”

She added, “And obviously, I’m happy to have my captain back on board because we were panicking. No other person can be like James Gunn for ‘Guardians.'”

At the time of his firing, Gunn released an apology, stating that his tweets were jokes that he regrets making. His statement read: “My words of nearly a decade ago were, at the time, totally failed and unfortunate efforts to be provocative. I have regretted them for many years since — not just because they were stupid, not at all funny, wildly insensitive, and certainly not provocative like I had hoped, but also because they don’t reflect the person I am today or have been for some time.”

Around the time he was fired, Saldana and her “Guardians” cast, including Chris Pratt, released a statement of support of Gunn on social media, asking Disney to reinstate the director.

“We fully support James Gunn. We were all shocked by his abrupt firing last week and have intentionally waited these ten days to respond in order to think, pray, listen, and discuss,” the cast said in a statement last summer when Gunn was fired. “In that time, we’ve been encouraged by the outpouring of support from fans and members of the media who wish to see James reinstated as director of Volume 3 as well as discouraged by those so easily duped into believing the many outlandish conspiracy theories surrounding him.”

Last week at CinemaCon, “Guardians” star Dave Bautista told Variety he would not have done the third “Guardians” movie if Gunn had not be rehired. “I am contractually obligated, but I think that Marvel and Disney –– if I had really stood my ground and said, ‘I don’t want to do this without James’ –– I think that they are decent enough that they would’ve let me out of my contract,” Bautista said.

The first two “Guardians of the Galaxy” films, released in 2014 and 2017, were box office hits for Disney and Marvel, making a combined $1.6 billion at the worldwide box office.

After he was fired from “Guardians,” Gunn was poached by Marvel rival studio DC to direct the sequel to “Suicide Squad,” on which he’s currently hard at work. Gunn is in the process of casting “Suicide Squad 2” with production expected to start this fall for a summer 2021 release date.