Whoopi Goldberg Returns to ‘The View,’ Surprising Her Co-Hosts and Detailing Her Illness 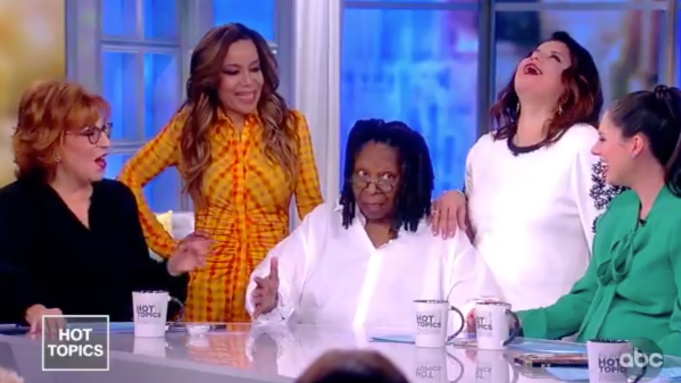 Whoopi Goldberg isn’t completely healed, but the host returned to “The View” for the first time in over a month on Thursday morning and shared her story — surprising her co-hosts in the process.

“This is my first foray out,” Goldberg said. “I’m not there yet, I know that. But the only way it’s going to get better is if I begin, so this is my beginning. I still have a cough and that’s the last thing to go.”

Over the next week and a half, she’ll start to return to the show on a more regular basis, she said, including Monday.

Goldberg revealed the full extent of her illness and how she almost died: Double pneumonia and sepsis. “There’s death, and here’s me,” she said. “You think you can push through because you’ve got a little cold. You think because you’ve healed quickly before that something crazy can’t happen, Well, it can. … They had to pump a lot of stuff out of me.”

The host said the experience was a “cautionary tale for all of us.”

“You must really take care of yourself,” she said. “There’s little tiny stuff out there that will kill you that you never think of.”

She said she didn’t realize the full extent of her illness until she went to the hospital and a worker commented on the color of her face.

“The scariest moment was hearing my doctor say to me, ‘You do realize how close to death you were?'” she said. “He said, ‘You need to be really clear in what this is.” As for now, “my immune system is challenged,” she said. “I will ease back.”

Goldberg said she had been coughing since November, which was the early sign of her illness. “The prognosis is, I’m not supposed to be here, but I got permission.” She’s not supposed to be with many people — which caused the studio audience to laugh.

“You can never leave me again,” co-host Meghan McCain said when Goldberg first appeared. “We are shocked,” added Joy Behar.

Goldberg thanked the press, including TMZ, for keeping the details of her illness quiet and not chasing her down in the hospital. She also took time to give her thoughts on the health insurance industry.

“One of the things I discovered is your insurance really doesn’t do much for you,” she said. “And the people who are saying ‘no’ to you are not doctors, they are people looking at algorithms. It got me to thinking, why is it that I have been paying insurance for over 60 years and it hasn’t rolled over? Who told them they could use that money when I wasn’t using it? I feel like if you’re paying into your insurance, that money should roll over until you need it. I know it’s a business, and I don’t mind them taking a little bit, but I don’t remember when they said, ‘well, we’re just going to keep all this money.’ Because people are busting their chops paying this insurance.”

“The insurance people should listen to the doctor… these are things we have the power to take care of,” she said. “This is my new [mission]. Tell me where you’re putting my money. Sixty years of insurance money and you’re telling me I can’t get this machine? Bitch, I’ll buy the machine!”