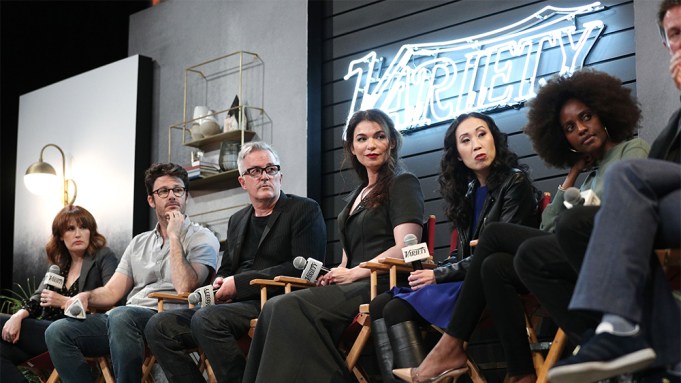 The WGA-ATA saga loomed large at Variety‘s “A Night in the Writers’ Room,” where showrunners and lead writers from several of the year’s best dramas gathered to discuss their business and craft.

The big four agencies and the WGA finally agreed to return to the negotiating table last week after a weeks-long stalemate. But with guild-represented writers compelled to fire their agents as a result of the conflict, it’s fair to say it’s been a tumultuous couple months.

“It’s a tough situation for everybody. I know a lot of lower level writers that didn’t get staffed this year and my heart breaks for them,” said “Good Girls” showrunner Jenna Bans. “At the same time I think the issues we’re fighting for are real and legitimate and I think we all want a solution that reflects the writers’ interests and we hope we get one very soon. I was heartened that they went back to the table last week.”

In addition to the WGA-ATA struggle, moderator Cynthia Littleton, Variety‘s business editor, touched on how up-and-coming writers are being forced into long, more restrictive contracts which bind them to exclusively write for one show, even as pr-season episode orders for top dramas are getting shorter.

“It seems crazy to me to mandate that a writer sit on their butt for eight or 10 months, waiting for show to come back that might not come back,” commented “You” creator Sera Gamble. “I just feel I’m actively harming a writer if I don’t say, ‘If you need a second posting let me know and I will do everything I can to help.'”

“Ozark” showrunner Chris Mundy agreed, adding that it’s ultimately up to the people at the top of each show to make sure the writers lower down the pecking order are able to explore other opportunities.

“At the end of our first year I said everyone’s invited back, but if you want to get another job I’ll help you get that other job. People have families, they’ve got to work, it really comes down to people like us in these chairs understanding that and not being an a–hole,” he said.

Have you ever been boxed in by your own writing? Jenna Bans, creator of "Good Girls," reveals the reality of writing for television. “Every episode of every season… is filled with full panic, full fear… It’s a continual cycle of panic and fear, it’s super fun.” pic.twitter.com/E6tSodbtex

For someone like “The Walking Dead” showrunner Angela Kang, whose show’s schedule means its staff work almost year round, the issues are less directly visible, but nevertheless important to address.

“I definitely think it’s a different world for a lot of writers breaking in right now,” Kang said. “It’s just a very strange way to cobble together a career that they’re all trying to navigate.”

#Ozark's Chris Mundy on how he settles debates in the writer's room. pic.twitter.com/Puucfd8JWo

Later in the panel, conversation turned to the recent spate of stories about abuse and inappropriate behavior, both in writers’ rooms and on TV sets.

According “Star Trek: Discovery” showrunner Michelle Paradise, the #MeToo movement and the push toward inclusion in the industry have had an impact in the room.

“We had a conversation on the first day with all of the writers about the importance of the room being a safe space, to be able to have these kinds of conversations, to be able to open up, to share things that you might not share elsewhere, to be able to pitch ideas,” she said. “As long as it’s a safe space it’s O.K., but certainly I think there’s less tolerance for the more egregious bad behavior. There’s just no place for the kinds of behavior that used to be acceptable and I think there’s a heightened awareness of that now, thank God.”

While for others, like Bans, the situation is complicated slightly by the more outrageous nature of their shows. Despite being a broadcast property, “Good Girls” is a series which doesn’t pull any punches, and the writers’ room reflects the show’s outspoken tendencies, Bans said.

Jenna Bans doesn't think 'Good Girls' would be on the air 6 years ago. https://t.co/4oHJbuQpr8 pic.twitter.com/Lx6jJmXNwH

“Our room is filthy. We say a hundred times a day, if HR could hear what we’re talking about we’d all be marched out immediately,” she said. “But that’s part of the creative process, you spend 20 minutes doing a bit about the dirtiest thing in the world, and that somehow gets you to an idea that fixes act two, it’s the weirdest phenomenon.”

Mundy added that he sees a potential problem that over-censorship in the writers’ room could cause.

“You can’t let someone be abusive to someone else, in any form,” Mundy began. “But there’s a real danger of people censoring themselves because you need people who are very different. If everyone thought like I did what good is that? You want different personalities, you need those people going for it and saying the weird things that come into their head and admitting strange things that they’ve thought. If you don’t, your show is going to only go up to about 80%.”

Conversation also turned to the topic of taking into account audience feedback and reactions while creating a show.

Cathy Kisakye of “The Chi” revealed that she and her writers have received messages from fans on Twitter urging them to push the story in certain ways, or to not pull a “Game of Thrones” and murder the most beloved characters.

“We had the advantage of having a first season and seeing how the audience responded to certain characters and they loved the kids, and so coming into the second season we could cater to that,” she said. “People would tweet don’t kill off the kids, so we made it a point to give them good storylines.”

“Catch 22” co-writer Luke Davies had a much different experience than most of the other panel members. As someone who has never been in a writers’ room and wrote almost all of the Hulu miniseries by himself, Davis said he was extremely curious to hear everyone else’s experiences.

When “Catch-22” showrunner Luke Davies first got the job adapting the novel he thought, “OK 44 chapters, 3 years, 15 episodes a season. And it turned out to be 6 episode limited series.” pic.twitter.com/Vc5wAeQzpR

“I was in a writers’ room on ‘Catch 22’ in the the sense that I’m a writer and I was alone in a room for 12 months with the voices in my head,” Davis joked to laughter from the room. “There were gut calls…I would have really loved to have a feedback loop with another human being.”

He and “Homecoming” creator and showrunner Micah Bloomberg exchanged anecdotes on adapting different forms of IP into television — in Bloomberg’s case the podcast he created, and in Davis’ case one of the most famous novels in the history of American literature.

“With the podcast and the features that I wrote before TV, you’re the director, alone, you’re one writer and the hardest thing about coming to TV was learning to see the writers and the people I was working with as an assert and not as something to try and control,” Bloomberg said. “You have so many great minds and they have experience and all their own ways to solve problems and that’s been the most interesting part for me.”