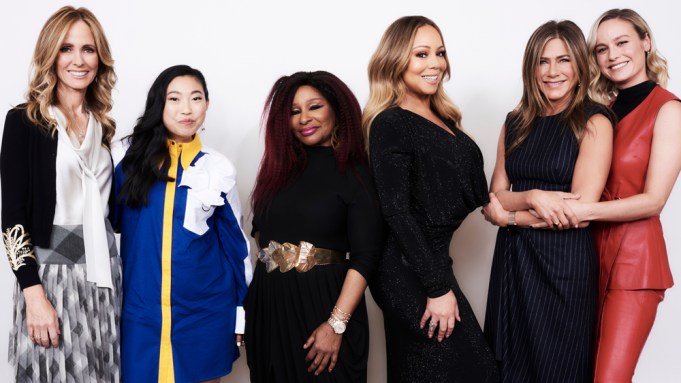 When Jennifer Aniston was 11, she was casually dismissed from the dinner table by a parental figure “because I ‘didn’t have anything interesting to add to the conversation.’”

That belittlement has stayed with the “Friends” and “The Morning Show” star through to adulthood, prompting her to muse at Variety‘s Power of Women luncheon on the messages society sends to children — young girls in particular — about power and voice.

“It’s funny, I’ve never actually thought of myself as ‘powerful.’ Strong, yes. But powerful, not [really],” Aniston told hundreds of attendees. “It’s a distinction I’ve actually been thinking about a lot lately because that word — ‘power’ and its counterpart, ‘abuse of power’ — keeps coming up in light of what is happening in our country and in our industry, a rebalancing of the scales, I guess you could say.”

That theme resonated throughout the event at the Beverly Wilshire on Friday afternoon among the six honorees at the 11th annual event, which included Aniston, Awkwafina, Mariah Carey, Chaka Khan, Brie Larson and Dana Walden.

A glitch in the TelePrompter equipment meant that several of the honorees and those making their introductions were left to rely on paper notes or memory, but all took it in stride, playing up the moment for comic relief. Aniston’s friend and introductory speaker, Ellen DeGeneres, entertained the crowd with a little soft-shoe while waiting for a potential fix, before getting serious and touting Aniston’s spokesperson work for St. Jude Children’s Research Hospital, which has helped its donations to surpass the $1 billion mark.

“Her work with St. Jude Children’s Research Hospital is a perfect example of how someone with power and influence can help those in need,” said DeGeneres.

Meanwhile, honoree Awkwafina prompted roars of laughter from the crowd as she contemplated, stream of consciousness-style, whether to “wing it” or not as the prompter blanked a “No signal” message at her. (Ultimately a colleague tossed her a smartphone that contained her speech.)

“Russian Doll” star Natasha Lyonne introduced the musician and comedian, quipping that it’s confusing for those on set when she directs Awkwafina’s upcoming Comedy Central series because their raspy voices “really sound alike.”

Awkwafina, who is working with charity Building Beats to provide low-income youth in New York City with musical education and mentorship, recalled growing up in Queens and “not having a roadmap to my own destiny, coupled with the intense urge to pursue something that made me feel free.” That would eventually come in the form of music, notably her YouTube hit “My Vag,” a viral springboard to fame.

“Sometimes I don’t feel power, and I’ve talked a lot about imposter syndrome,” said Awkwafina, hitting a note of gravitas on stage. “I’m literally a walking definition of imposter syndrome. I think that’s something we all go through sometimes. But I’ve come to realize that the true power we possess comes through our stories, and how they influence others to believe in their own. The power in my story, a girl with the voice of a pro wrestler and the body of Pikachu — the fact that I am standing before you means that someone else can do it too.”

Variety editor-in-chief Claudia Eller kicked off the luncheon, highlighting the power of even more women in her introductory remarks: Jane Fonda and Greta Thunberg for their climate-change activism; actors Michelle Williams and Alex Borstein for their calls for pay-equity and to “step out of line,” respectively, at the Emmys; as well as directors Lulu Wang, Kasi Lemmons, Greta Gerwig, Lorene Scafaria, Alma Har’el and Marielle Heller.

“There’s some debate as to whether this is just a blip or if it marks an inflection point,” said Eller. “I know we all hope that it is the start of a positive trend, and let’s hope that some of these wonderful female directors that I just named will not be shut out of the Oscars, like they were last year.”

Prolific producer Ryan Murphy, of “Pose,” “American Horror Story” and “The Politician,” remembered his own lack of power in the early 2000s, as an out person trying to make it in Hollywood. He recalled feeling invisible and otherized, and notes that it was honoree Dana Walden who took a chance on him, opening the door for his many series, including “Glee” and “Feud.”

In the vein of powerlessness, he also recalled that when his youngest son, Ford, was diagnosed with neuroblastoma at just 18 months old, it was the Disney Television Studios and ABC Entertainment chairman who took charge and helped to bring Ford to Children’s Hospital.

Walden, who became involved in fundraising for UCLA’s Jonsson Comprehensive Cancer Center after her mother’s cancer diagnosis and treatment at the facility, praised Dr. Judy Gasson, the first woman to run a major U.S. cancer research center, for her medical expertise. She also emphasized the importance of young women being able to see female leaders in action.

“Today there are female leaders throughout all the big media companies. I’m especially proud to look out and see four female presidents, working with me inside of Disney Television Studios and ABC Entertainment,” she said. “We’ve come such a long way and we have so much positive momentum. I feel just as confident that a woman will have my job one day as, perhaps, a man.”

“I may not be a woman of power yet,” she said, “but girl power can change the world… Miss Mariah Carey knocked open the doors to the entertainment industry for girls who look like me.”

Carey, who recited part of the lyrics to her song “Close My Eyes” in her introduction, said that she was just 18 years old when she got her first record deal.

“A lot of very powerful men controlled my career — what I wore, who I worked with, and every aspect of my overall image,” she said. “Believe me, that can be very intimidating and confining to a young girl just getting started, trying to express herself artistically. It took a lot of hard work, inner strength and believing in myself, but slowly I gained the courage to emerge from that stifling control by a group of men. We love men, but you know, they could never understand or embrace the essence of who I truly am.”

She then gave a shout-out to her fellow honorees and “all the women who have come forward with their truths, their harrowing experiences, and above all their triumphs over the misogynistic society of corporate asses that we deal with every day.”

Former Power of Women honoree Natalie Portman introduced Larson, recalling that they were first acquainted through their work with Time’s Up, and that Larson had pushed for more women and people of color representation in the film-critic and entertainment-journalism community.

In talking about EJI, founded by Bryan Stevenson to fight for justice for the wrongly convicted, Larson highlighted the group’s work with “thousands” of cases.

“When I was prepping for the film, I asked Eva how she keeps going in the face of so much working against her, and she said, ‘If all I can do is bring a little hope to someone, that’s enough. No one needs to feel alone,’” said Larson. “Well, f—. I’ve been chewing on that sentiment for a year now, and here’s what I’ve begun to practice with that: Every interaction is a chance to bring hope.”

Lastly, “Claws” star Niecy Nash, in introducing Chaka Khan, called the musician a “legend walking among us,” citing her 22 albums, 10 No. 1 hits on Billboard and 10 Grammys.

Khan quickly tossed out her prewritten speech to speak from the heart, recalling the cold Chicago winters of her early career, her musical trajectory and her charity work, receiving a standing ovation.

“I visit children in hospitals, little kids with cancer and dread diseases, and if you want to really get a fix on what’s going on, do that,” Khan told the audience. Though she was initially “really scared” the first time she visited a children’s hospital, she arrived to kids that were “bouncing off the friggin’ wall, they were so full of life,” and recalled how deeply they moved her.

Khan was honored for her work with Little Kids Rock, a charity that offers musical equipment and material for public schools across the U.S.

“If I can inspire anybody to do themselves, fearlessly, I’m happy,” she said. “God knows I have.”

Power of Women was presented by Lifetime, with music direction by Daisy O’Dell. Other sponsors included Moroccanoil and Audi.