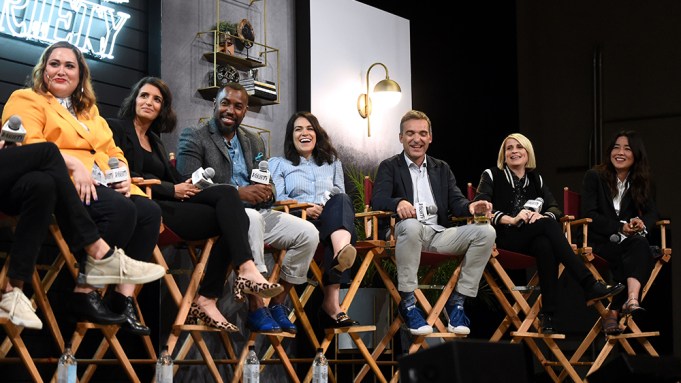 The WGA writers boost and representing Los Angeles on screen were two of the topics most passionately discussed at the comedy panel for Variety‘s “A Night in the Writers’ Room” event.

While the drama panel earlier in the evening delved into the struggle that newer writers face as a result of the WGA-ATA impasse, the gathering of esteemed comedy writers and showrunners shared positive side stories which resulted from the #WGAstaffingboost — the social-media initiative meant to make less experienced writers more visible to showrunners hiring during the impasse.

“Vida” creator Tanya Saracho said that she felt it was her duty to participate in the staffing boost and reach to aspiring, often unrepresented writers on social media. She received a mountain of scripts in response, but delightedly revealed that she found someone she wants to hire for Season 3.

Later, the conversation moved to representation on screen, with Saracho saying that the industry is making “small steps,” but that it’s still too early to “pat ourselves on the back.”

Saracho’s show and that of Prentice Penny, one of the lead writers on “Insecure,” are helping by portraying their characters and the Los Angeles neighborhoods in which they live in an authentic manner.

“I grew up in L.A….and I was like you never see anything South of the 10, especially with people of color, it feels like this generic neighborhood that’s just a set from ‘Perfect Strangers,”” Penny said. “When you’re filming in your neighborhoods, it’s not just seeing yourself on screen, it’s also seeing a kid that goes to Audubon Junior High that’s like, ‘Yo they were filming a television show on HBO around the corner from me, I saw Issa Rae, I saw black directors and writers in my neighborhood…that does a lot, showing their L.A. on screen is important for lots of reasons.”

Two of the shows represented on the comedy panel, namely “Atypical” and “Pen15,” led their creators to getting into the mind of a teenager. For Robia Rashid, showrunner of “Atypical,” it felt like a chance to make her young characters less perfect than the ones she used to see on television when she was their age.

Maya Erskine on why "PEN15" cast adults to play 13 year olds, “There’s something about seeing an actual kid go through that it’s too close, it’s really traumatizing. But through the lens of an adult looking back… there’s enough distance for the audience to feel safe.” pic.twitter.com/zsi7CpsKZO

‘We can make our characters assholes now and that’s really nice, especially when you’re watching teenagers. When I was a teenager it was very alienating to watch perfect looking, perfect behaving teenagers,” she said.

While for “Pen15” co-creator Maya Erskine, things were just as personal, given that she not only writes, but also plays her 13-year old self in a unique twist.

Erskine cast her mother to play herself in the series, and while she was delightedly surprised with how she performed, she told an anecdote about how having her on set could sometimes make things emotionally complicated.

#RT @Variety: Abbi Jacobson on the end of #BroadCity, "It was so parallel that is was confusing and so helpful." pic.twitter.com/aPkPIovryO

Her mother was on set one day for scene in which her character is “put down” by some other middle school girls because she wants to be Posh Spice from the Spice Girls. The girls say she can only be Scary Spice because she’s “darker.”

“It was a scene that had happened to me when I was a kid,” Erskine said. “My mom was there with her niece and their two daughters and they’re both a quarter Asian, and I was trying to explain what this scene was and I just broke down on set. Acting that out and having to explain to two young girls who were asking why are they being mean to you? Why aren’t you the popular girl?”

Another of the panelists with experience of casting real life parents in a series was Alan Yang, the co-creator of “Master of None” who later discussed the twist and turns of his recent Amazon show “Forever.”

“It’s hard to find actors who feel genuine. We cast Aziz’s parents as his parents in ‘Master of None’ and it’s honestly because if you’re that age and you’re an immigrant, why would you become an actor, there were no roles for you,” Yang said.

Earlier, moderator Michael Schneider, Variety senior editor, kicked off the panel by discussing how comedy writers balance the light and the dark, given that many of this year’s biggest comedies, including Netflix’s “Dead to Me,” deal with death and grief.

“It started almost subconsciously for me, it’s how I look at life I realized. I was going through a dark time when I came up with the idea for ‘Dead to Me,’ I was coming off the death of a really close family member, I was trying to get pregnant for the fifth year in a row, and nothing was going the way I wanted it to,” Creator Liz Feldman said, “Maybe because I’m a comedian or it’s just how I look at life, there’s just too much darkness sometimes and you have to find something to laugh at, it’s a human coping mechanism.”

Tanya Saracho of #Vida isn’t ready to pat Hollywood on the back just yet, “Not until some of us aren’t the token show” https://t.co/HIhQ15kh1a pic.twitter.com/EYeJXa0xjP

For Sarah Schneider and Chris Kelly, who co-created Comedy Central’s “The Other Two” and were formerly the head writers on “SNL” during the election year, their show was provided a different kind of coping mechanism.

After going through a tumultuous 2016 and non-stop writing about politics and Trump, Schneider said it felt like a relief to get away from those issues.

“That last year was so crazy and singular and it was very cool that we got to do that,” Kelly added. “But we decided early on that there’s no specific President in our show and we never would do a joke that had to say Trump because we were like, ‘Ugh, no.’ We liked being able to do social issues and pop culture and things that were interesting to us and we related to but weren’t about the administration.”

The panel also featured two writers in Abbi Jacobson and Steve Holland who both spent years on their shows, “Broad City” and “The Big Bang Theory” respectively, and brought them to an end this season.

Jacobson said she and her co-creator Ilana Glazer were able to achieve a “rare thing” — end the their show on their own terms.

“We ended in March, we chose to end it and I love the way we did it and it was so meta me experiencing ending this show that Ilana and I have been working on for 10 years,” Jacobson said. “It was so parallel that it was confusing and so helpful because it was dealing with growing and how relationships change as we get older.”

For Holland, he and his fellow writers felt immense pressure when ending their show, both because it represented a pop culture landmark, and also because they didn’t want to disappoint their many fans.

“It ruined season 12, if it had just been a regular season it would have been fine, but realizing it was the last one, it was the episode we thought about the most we agonized over the most,” Holland revealed. “At some point we just had to put aside what people were expecting or wanted to see and try to think of ourselves as the first line of fans of these characters to find what felt good to us to end it.”