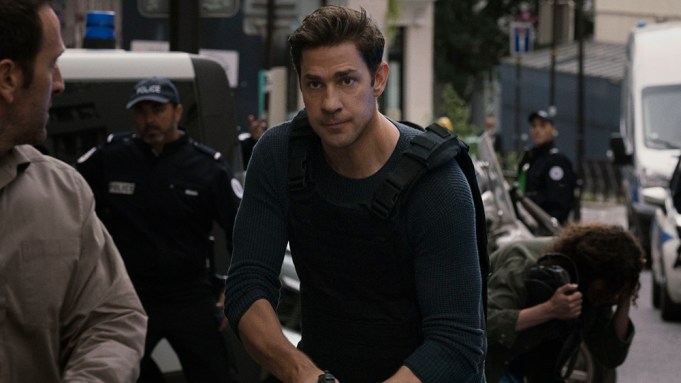 Season 2 of “Tom Clancy’s Jack Ryan” will premiere on Amazon Prime Video on Friday, Nov. 1. John Krasinski stars as CIA agent Jack Ryan, who, in the second season, ventures into a Venezuelan jungle to investigate an illegal arms deal.

The “Mad About You” limited event revival for Spectrum‘s On Demand platform is set to launch Wednesday, Nov. 20. The first six episodes will be available at once on this day, with the final six being released a month later, on Wednesday, Dec. 18. Paul Reiser and Helen Hunt reprise their sitcom couple roles in the project.

“The Jim Jeffries Show” will return to Comedy Central on Tuesday, Sept. 17. In the new season, Jeffries will travel the globe for comedic and insightful takes on international experiences.

Netflix has set the premiere date for “Queer Eye: We’re in Japan!“: The new installment, which features the Fab Five going abroad, will launch on the streamer Friday, Nov. 1.

Tony Hale created and stars in an upcoming animated series for Netflix, entitled “Archibald’s Next Big Thing.” The show, of which Variety obtained an exclusive first look, centers on a happy-go-lucky chicken, voiced by Hale. Watch the clip below:

AMC dropped the official trailer for its new documentary series “Hip Hop: The Songs That Shook America.” Each of the six episodes focuses on a seminal hip-hop song. The show will premiere on Sunday, Oct. 13.

“Wife Swap” has been renewed for a new season on Paramount Network with 20 new episodes. In the show, families swap spouses and must adjust to the new rules of their respective households.

A+E Studios and The Cut have joined forces for a two-year first look development and production deal. Under the pact, A+E Studios and The Cut, co-founded by producers William Green and Aaron Ginsburg, will develop and produce scripted projects together for the A+E portfolio of networks, as well as for broadcast, premium cable, streamers and other outside buyers. Tana Jamieson, senior vice president, A+E Studios, said in a statement that they are “thrilled to be partnering with the innovative and fresh voices at The Cut. From television series to podcasts, William and Aaron have achieved an incredible amount of success throughout multiple mediums, and we look forward to collaborating with them on an eclectic range of premium scripted content.”

Talent and production executive Shanna Strassberg has joined CMT as vice president of music and talent. She will report to Leslie Fram, senior vice president of music strategy and talent. “Shanna’s stellar reputation and strong relationships within the music and television communities are unparalleled,” said Fram. “She joins us at an exciting time for the brand including the upcoming 10th anniversary of ‘CMT Artists of the Year’ and I can’t wait for her to lend her talents to this team.”

Discovery has announced the first wave of senior leadership in its new joint venture with Chip and Joanna Gaines: Donna MacLetchie has been named general manager, programming; Julie Morris has been named senior vice president, brand strategy and operations; and John Marsicano will lead publicity and communications strategy.

BET Networks announced today that Jeanine Liburd has been appointed chief social impact and communications officer. Liburd will report to Scott Mills, president of BET Networks. “BET Networks is raising the bar on how we engage and support Black communities, and Jeanine is a visionary leader whose forward-thinking and deep consumer understanding will be essential in this effort,” said Mills. “Brands have the opportunity to partner with the communities they serve and elevate the issues that matter to them, this is why we expanded our brand purpose to entertain, engage and empower and I am thrilled to have Jeanine lead our empowerment work.”

Lauren Zima will begin as a full-time correspondent for Entertainment Tonight starting at the beginning of its 39th season on Monday, Sept. 9. Zima most recently served as host of ET Live. “Lauren’s evolved role is a testament to the importance of ET operating as one brand, as well as a reflection of her excellent work for ET digital over the last several years,” said executive producer Erin Johnson. “Lauren’s interviewing skills and savviness at navigating the needs of all our platforms will be incredibly valuable as we embark on the new season and beyond.”