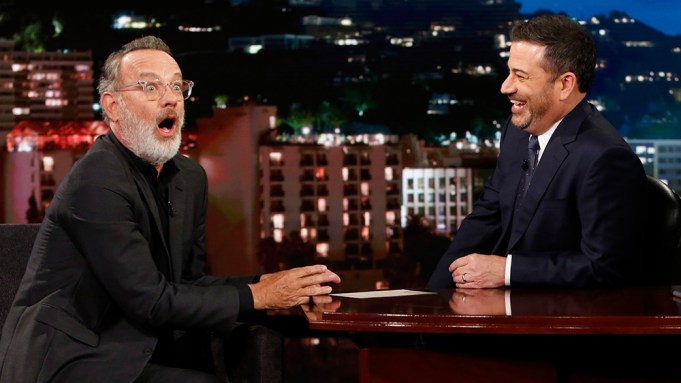 According to Tom Hanks, he’ll be removing his beard — which he’s sported for some time now — following the conclusion of a role. But, as evidenced on “Jimmy Kimmel Live!” Tuesday night, some may not be able to recognize him without it.

After Hanks and Kimmel discussed the “Sully” actor’s recent stint shooting in New Mexico, Kimmel played a clip of three “Jeopardy!” contestants, in which one woman selected “Biopics” for $200.

“In ‘A Beautiful Day in the Neighborhood,’ beloved children’s TV show host Mr. Rogers is played by this beloved actor,” Alex Trebek intoned while a clip of a clean-shaven Hanks as Fred Rogers played. Trebek was met with blank stares and silence.

Hanks joked that they could have gone with Woody Harrelson or Mahershala Ali.

Kimmel had a different take, however.

“I look at it as you inhabited that character so beautifully that even they were absorbed instantaneously!”

Hanks also recounted a story from filming “A Beautiful Day in the Neighborhood” in Pittsburgh. A man who joined Hanks an elevator recognized the actor and asked him about filming the movie. As he was getting off the elevator, he looked back at Hanks while the doors closed and said, “We take Mr. Rogers very seriously here in Pittsburgh.”

“His eyes went snake-like for a second and I’m thinking, ‘I believe I’ve been threatened in the City of Three Rivers,” Hanks said.