‘Mixed-ish’ Team on Why ‘All Stories About “Others” Are Necessary’ 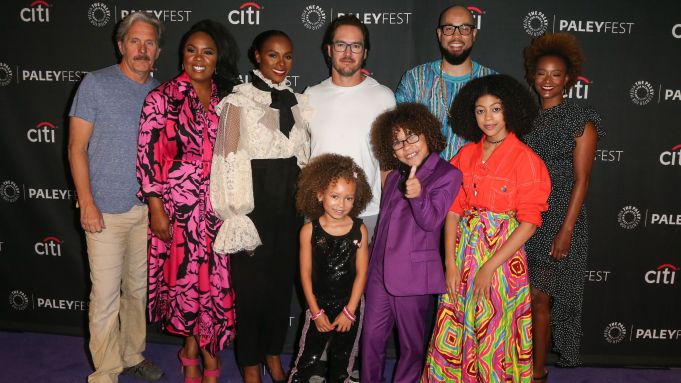 The producers and cast of “Mixed-ish” are not out to tell a singular black and white story — but one that showcases and celebrates all shades in between.

“It’s important for me across the board in all of my work to talk about ‘otherness’ and identity and real, grounded characters,” showrunner Karin Gist told Variety at the PaleyFest Fall Previews panel for the new ABC comedy on Saturday. “This is just another example of that — an example of putting something up for everybody to talk about think about have conversations about through these characters that you fall in love with. It’s a story about ‘others’ that I think is necessary and I think all stories about ‘others’ are necessary.”

In the newest addition to Kenya Barris’ “ish” universe, Gist and fellow executive producer Peter Saji shine a light on “Black-ish” Johnson family matriarch Rainbow’s (played by Tracee Ellis Ross in “Black-ish” and Arica Himmel in “Mixed-ish”) origin story. The pilot begins when the hippie commune in which she was raised gets raided and her family has to move to the suburbs. The young Rainbow and her siblings (Mykal-Michelle Harris, Ethan William Childress) are left to navigate race and capitalism in the “real world.”

“They’re also a family that has a different belief system. They’re coming off a commune so they’re a fish out of water in a lot of ways, and they’re going to have a lot of firsts as a family. That’s a way to bring in the conversation for everybody. Everybody knows what it’s like to not be the norm,” Gist said.

While they may be young, the children of the cast made sure to share that they were well aware of the importance this show has on the topic of representation and diversity.

Himmel echoed a similar sentiment on the “Mixed-ish” red carpet saying, “I feel like this is what America needs on television. This is something that is going to keep growing and I’m excited for people to see all of this.”

Industry veteran Mark-Paul Gosselaar, who plays “Mixed-ish” patriarch Paul Johnson, acknowledged that he didn’t have to go through many of the things the kids experienced on the show, but also shared that the show itself has taught him a lot about himself.

“My mother was Asian, my father was European, and because of how I look, I never had to deal — fortunately and unfortunately — with a lot of things that we’re going through on our show. The highlight is honestly the lessons that I’m learning through our show. The ‘ish’ world does such a good job to talk about these things. It’s really a highlight for me to be apart of this and tell a story that hasn’t been told before,” Gosselaar said.

Tika Sumpter, who plays matriarch Alicia Johnson, added that her casting on the show will open the door on the colorism conversation. “I think for Black women, we never get to see our identity played out fully and what does that mean, and all of the relevancy of the issues that we deal with every day of just being in this world and taking up space,” she explained. “I think it’s relevant and I think people will tune in for that. I think it’s important — it’s always important to talk about identity.”

On-scree in the series, it is Christina Anthony’s Aunt Denise who makes sure to remind her family of their blackness, at one point even making a joke about the youngest daughter SantaMonica’s (Harris) edges. However, the actress maintained while the show points out the ways in which people categorize others, it’s meant to bring everyone together.

“I’m a dark-skinned woman. I’m not biracial. I’ve never been mistaken for biracial. I’m excited, as an actor, to be telling a story of what it takes to get us here. Also, I’m excited for people to see themselves reflected there,” Anthony said. “I think that’s an important point of view, as well to say not only is she telling them to be Black is an easier choice, but she’s saying being Black is wonderful. So, I don’t want that to get lost in the conversation which is Aunt Denise and Christina, we’re both proud to be Black. I think we’re encouraging the children to choose that for what they mark for their ethnicity, but also just carrying that pride with you. I hope that Black children and parents will see this and know that they can be proud of who they are.”