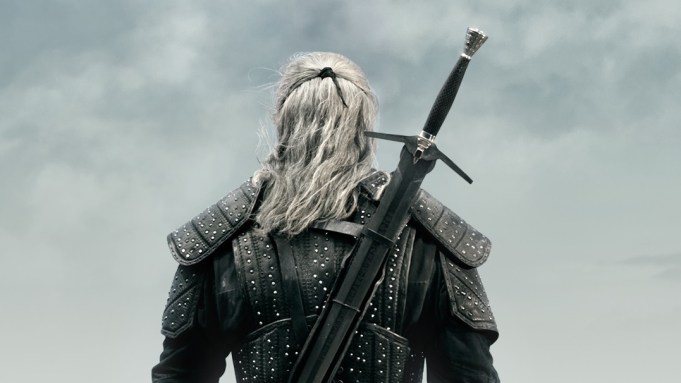 Henry Cavill has left his Superman cape at home and is donning a silver wig instead.

The actor, along with his “The Witcher” co-stars, unveiled the first trailer for the much anticipated Netflix series at a packed Comic-Con Hall H panel.

The trailer sees Cavill as Geralt of Rivia in all his Witcher glory, wielding his lengthy sword and relaxing in a hot bath. Later in the panel, an extra clip saw Geralt slaying enemy knights left, right and center in an action-packed throne room sequence.

Cavill revealed that he was attracted to the part because he loved the video games and campaigned “passionately” to be cast in the role.

“I’m a big gamer, I played the games a lot, many many hours put into those,” he said. “There was something about Geralt which really struck a chord with me, he’s not your average hero….he won’t treat everyone perfectly and at the same time down he’s a real hero, but he keeps that very secret and very private.”

Showrunner Lauren Schmidt Hissrich said that they auditioned 207 actors for the role of Geralt, but she kept on coming back to Cavill because she had his voice on her head while penning the scripts.

“I met Henry for the first time before there was a script or anything, he was really annoying,” she joked. “I said yes, fine, I will take a meeting with you and we will talk about s how that’s not yet greenlit.”

After the sword-swishing clips played, Cavill said that he did all his own stunts for the show and discussed how he trained for them.

“It was getting used to the wight of the sword, using it day in day out,” Cavill said, adding that he kept three different swords and carried them throughout the day while filming.

Later in the panel, Cavill asked for a show of hands of who had read the original stories or played the video game, before handily explaining exactly what a Witcher is.

“A Witcher is a young boy who has been left to fend for themselves and taken in by the group called Witchers and they are trained to levels of almost inhuman agility and endurance. And from there they become mutants, most of these children do not survive….after that they are trained in the art of monster hunting and travel the world hunting monster for coin, that is their one and sole purpose in the world,” Cavill said.

Previous images of Cavill in costume had caused some consternation among fans due to Cavill’s Geralt only having one sword instead of two as in the video game. However, from the trailer and clips, one sword seems to be quite enough for Geralt to do some damage.

“The Witcher” is a fantasy series from Polish author Andrzej Sapkowski. The stories were adapted into a popular role-playing game series by developer CD Projekt Red.

Variety broke the news that Schmidt Hissrich was signing on as executive producer and showrunner in December. She previously wrote and co-executive produced the Marvel superhero dramas “The Defenders” and “Daredevil” for Netflix, along with Starz’s “Power.”