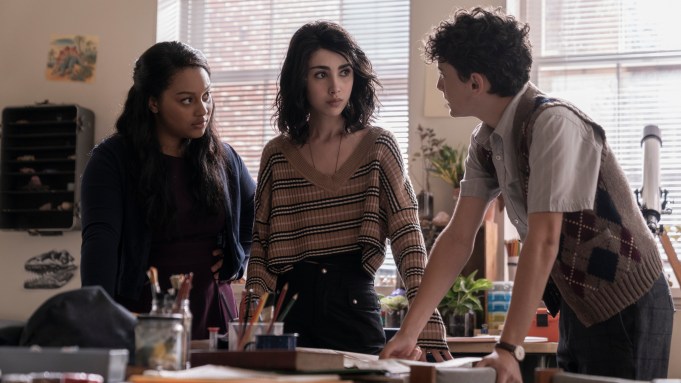 Nearly a decade after the start of the zombie apocalypse as shown in “The Walking Dead” and “Fear the Walking Dead” comes a third new drama in that universe. Although it is still untitled, the show has been in production and AMC just released a trailer for it.

In it, a character named Iris (played by “The Red Line’s” Aliyah Royale) gives a speech about how her dad is fighting for the future and “to get us back to where we were.” But it clearly won’t be easy. As she follows, “It may take generations to reach the level of sophistication our science will need.”

Although the characters in this new show start the story in seeming comfort and safety in an enclosed environment, they soon venture out in the larger, undead world, being told they “should be scared every time — every single time you are outside those walls.” And yes, that means they will be confronted by zombies.

Previously, AMC released some first-look images from the new series, which the first generation to come of age in the post-apocalyptic world.

The new show was created by Scott M. Gimple and Matt Negrete (who also showruns). It stars Royale, as aforementioned; Alexa Mansour as Hope; Annet Mahendru as Huck; Nicolas Cantu as Elton; Hal Cumpston as Silas; and Nico Tortorella Felix.

AMC also announced a renewal for “The Walking Dead” on Saturday.