‘The Office’ to Stream Exclusively on NBCUniversal Service Beginning in 2021 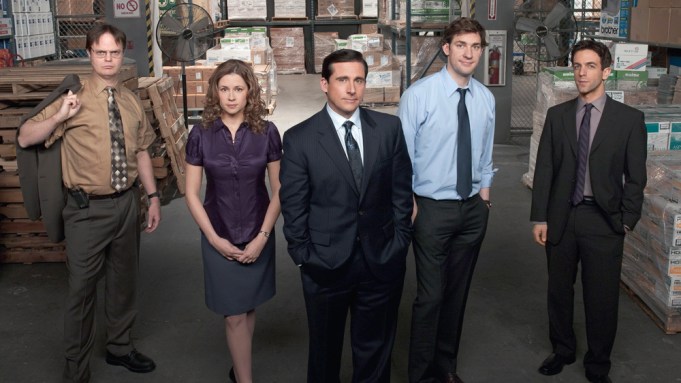 NBCUniversal announced Tuesday that it will begin streaming “The Office” exclusively on its standalone streaming service beginning in 2021.

The popular comedy series will leave Netflix once the current deal with NBCU expires at the end of 2020, the same year that NBCU plans to launch its ad-supported streaming service. All nine seasons of the series will then be available on that service the following year.

According to an individual with knowledge of the deal, multiple outlets bid on rights for the series, including Netflix. Per CNBC, Netflix offered $90 million per year to keep “The Office,” with NBC upping the bid to $100 million per year for five years.

“‘The Office’ has become a staple of pop-culture and is a rare gem whose relevance continues to grow at a time when fans have more entertainment choices than ever before,” said Bonnie Hammer, chairman of NBCUniversal direct-to-consumer and digital enterprises. “We can’t wait to welcome the gang from Dunder Mifflin to NBCUniversal’s new streaming service.”

Based on the British series of the same name, “The Office” offered a mockumentary style look at life inside the fictional paper company Dunder Mifflin in Scranton, Pennsylvania. The series debuted in 2005 and went on to become a critical favorite, picking up 42 Emmy nominations and 5 wins among many other awards over its run. It also helped launch the careers of people like Steve Carell, Jenna Fischer, John Krasinski, Rainn Wilson, Mindy Kaling, and Mike Schur.

The news comes as more and more companies are pulling their legacy content off of streamers like Netflix in order to keep them on their own branded streaming services. For example, “Friends,” which also currently streams on Netflix, will likely be pulled onto the upcoming WarnerMedia streaming service. WarnerMedia’s Kevin Reilly previously said that he expected shows like “Friends” to end up on the new service eventually.

“You can expect that the crown jewels of Warner will ultimately end up on the new service,” he said in February, adding that “sharing destination assets like that… (is) not a good model.”

Similarly, following the acquisition of 21st Century Fox, Disney announced that its upcoming Disney Plus streaming service would be the exclusive SVOD home of “The Simpsons,” with all 30 seasons available at launch.