‘The Mandalorian,’ ‘Lizzie McGuire’ and Talking Dogs: 5 Things We Learned at D23 Day One 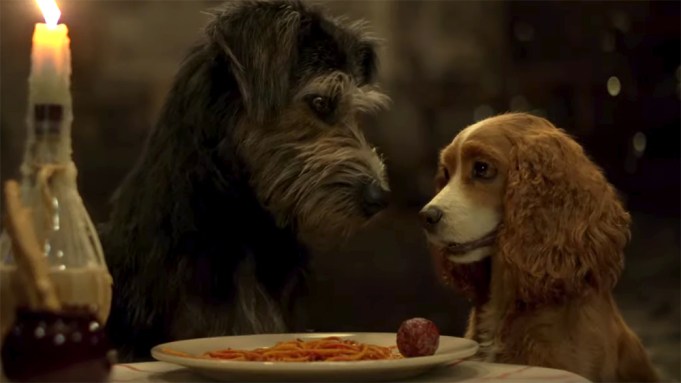 An action-packed first day of Disney’s D23 Expo was headlined by an endlessly starry Disney Plus presentation to unveil the new streaming platform.

With no fewer than six new series announced in the space of two hours, it’s clear that Disney isn’t messing around when it comes to competing in the streaming wars, so neither shall we. With out further ado here are five takeaways from day one at the Anaheim Convention Center:

Disney execs began the highly anticipate Disney Plus panel by listing all of the old, classic Mouse House properties which will be available on the streamer from launch on Nov. 12. However, simply putting all of Disney’s admittedly vast library of old content in one place isn’t going to cut the mustard with sharks like Apple and WarnerMedia in the streaming waters. So what does Disney do in response? Lean even more heavily into their IP library to bring out new shows with subtle twists. Think a new “Lizzie McGuire” but she’s 30, “The Muppets” but it’s a non-scripted short-form series, Star Wars but it’s a samurai-Western series with “The Mandalorian,” Obi-Wan Kenobi but he’s…oh not wait it’s still Ewan McGregor.

Kevin Feige has been in the news this week for being caught up in the Marvel-Sony spat which has led to Spiderman’s future in the MCU dangling by a thread. However, at the Disney Plus presentation Feige appeared to be in a bullish mood, rattling off his usual spree of eye-catching Marvel announcements. This time it was a triple whammy of a “Ms. Marvel” series, to feature a Muslim-American superhero, “She Hulk,” meaning that Bruce Banner has company in the Hulk department, and “Moon Knight,” which definitely felt like the least flashy and well known Marvel property on show. While the potential loss of Spiderman is undoubtedly a body blow to Marvel on the film front, Feige set out to demonstrate that the content powerhouse is fully intent on spreading its box office dominance to the TV side.

“WandaVision” is a Sitcom?

After the three new series came a parade of familiar Marvel faces. Anthony Mackie and Sebastian Stan bantered a little for “Falcon and the Winter Soldier” without really saying anything, and Tom Hiddleston appeared on the jumbo screen for 30 seconds to wave hello and not reveal much about his new “Loki” series. However, then came arguably the most surprising revelation to emerge from the Marvel part of the Disney Plus presentation which is that “WandaVision” is going to be “half classic sitcom and half MCU spectacular.” If that’s leaving you perplexed, imagine what the reaction in the hall was when Paul Bettany and Elizabeth Olsen unveiled a clip for the series which basically consisted of old footage of Scarlet Witch and Vision cooking goulash etc. interwoven with clips from “The Dick Van Dyke Show.” Granted the show’s set in the 1950s, not a million miles away from the domestic 60s setting of the classic CBS sitcom, but it still seems like a bit of a stretch to juxtapose Van Dyke with an all-powerful mutant and a…whatever Vision is.

Disney knows how to play to a crowd. About halfway through the Disney Plus presentation, just as the parade of announcements seemed to be dragging on a bit, they brought out the dogs. Talking dog movies have historically been a mixed bag to say the least, but the trailer for Disney’s live action “Lady and the Tramp” looks utterly delightful. The reveal that all the canine comedians in the film were rescues only made the “aww’s” in the room grow louder. However, fuzzy ears and wet noses aside, there are still some question marks hanging over the film, primarily how will it handle re-casting its villainous cat duo and their stereotypical, downright racist portrayal in the original film. The trailer might be adorable, but the success of “Lady and the Tramp” will all come to down to whether its box office bark is bigger than its bite.

Send this to your friend who is constantly asking for dog pics #D23Expo #LadyAndTheTramp pic.twitter.com/CWLEv8JQo6

‘Dancing With the Stars’ Foxtrots Away from Controversy

One of the biggest Disney-related headlines going into D23 was the decision to have Sean Spicer as a contestant on next season of “Dancing With the Stars.” After the monumental online backlash, the D23 “DWTS” panel, which took place in front of hundreds of avid fans, seemed like the perfect place for showrunner and executive producer er Andrew Llinares to clear the air. However, Llinares and the panel remained entirely silent on the matter, other than host Tom Bergeron saying “there’s been a little press” about the new season. That’s putting it mildly Tom! Instead, the hardest questions thrown at Llinares and Bergeron was who’s your favorite Disney character and who would you play if you could dance on Disney night one more time? The show’s silent response on Friday was deafening.