‘The Mandalorian’: 5 Burning Questions From Episode 4 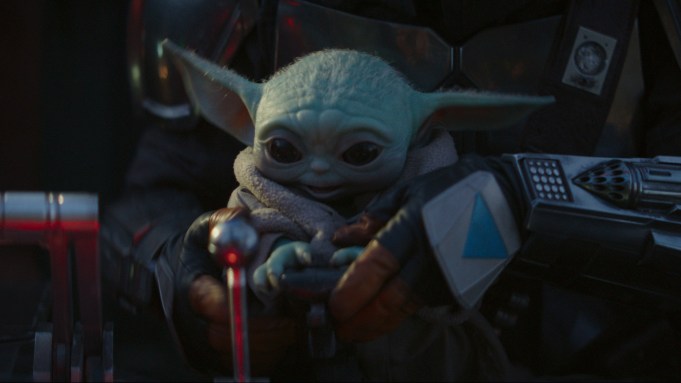 (SPOILER ALERT: Do not read on if you have not watched the first four episodes of Disney Plus’ “Star Wars” spinoff series “The Mandalorian.”)

After the action-packed shootout that bookended episode 3, this week’s edition of “The Mandalorian” was largely a more relaxing watch.

Mando and Baby Yo arrived on a remote planet to lay low for a while, but, predictably enough, trouble found them pretty quickly in the form of Gina Carano’s Cara Dune, and then a hoard of raiders accompanied by an AT-ST Walker. This time the Child’s force powers weren’t needed to save the day, as a combination of Cara’s cunning and the local farmers’ bravery felled the menacing machine.

For a hot second it looked like Mando and his protege might settle down in this small community, but sadly this isn’t a Star Wars sitcom set on a small farm in the outer reach.

Without wasting any more time, here are some burning questions following this week’s episode.

Has the Mando met his match in Cara Dune?

Gina Carano’s character came into the series kicking and punching. The first we get a full look at her she’s swinging away at the Mandalorian and roundly kicking his ass until they reach a stalemate. It’s an odd way for a long and beautiful friendship to begin, but that’s surely what’s on the cards for these two lovable loners. We learn that Dune used to be part of the rebel forces that fought the empire, but now she is in “early retirement,” hiding on this remote planet. While Mando and Cara seemingly part ways at the end of the episode, there’s no way we won’t be seeing her impressive combat skills and debonair charm again very soon.

When will Mando, Cara and Baby Yoda be getting a standalone movie?

Plenty have already been making the Baby Yoda-Baby Groot comparison online, and if we’re being honest Cara Dune is not a million parsecs away from Zoe Saldana’s Gamora. The “Guardians of the Galaxy” franchise has been a mega hit for Disney so far, and it’s very easy to see the central trio from “The Mandalorian” having the same swashbuckling, cheeky large screen appeal.

What lies under the Mandalorian’s helmet?

Well, Pedro Pascal obviously, but the mystery is drawn out in this episode as we see him take it off for the first time, only with his face off-camera. Will his visage be lacerated with scars from his past scrapes, from the attack that killed his parents as a child? Will the moment it comes off bring another dimension to Pascal’s performance, which thus far has been limited to physicality and dry, monosyllabic delivery? From a previous trailer we know that he will take off his shiny helmet at some point, so expect the moment to carry plenty of gravity when it does. Maybe Baby Yoda will force it off him as a game? That might be the way.

Are bars on the galaxy’s edge equipped to seat children?

Yes they are! In the episode Baby Yoda hops into his adorable little chair, seemingly made specially for little scamps like him. And they have a homemade broth on the kid’s menu. Who knew watering holes full of outlaws and ruthless mercenaries would be so kid-friendly?

How can you tell when Baby Yoda is sad?