Teyonah Parris Cast in ‘WandaVision’ at Disney Plus 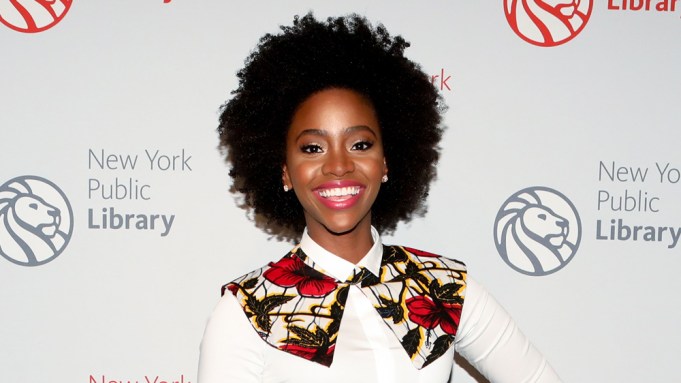 “Mad Men” and “If Beale Street Could Talk” actress Teyonah Parris has been cast in Disney Plus’ “Wanda Vision” series.

She will play an adult version of Monica Rambeau, a child character introduced in the film “Captain Marvel.” The announcement was made at Marvel’s Comic-Con presentation.

The forthcoming Disney+ series about Wanda Maximoff/Scarlet Witch (Elizabeth Olsen) and Vision (Paul Bettany) will be set in the 1950s.

Parris is also known for her roles in films like Spike Lee’s “Chiraq” and Justin Simien’s “Dear White People. She has also appeared in hit TV shows like Fox’s “Empire,” and Starz’ “Survivors’ Remorse.”

Jac Schaeffer, a screenwriter for the “Captain Marvel” film, is writing, producing, and showrunning the series. “WandaVision” will be available in the second year after the scheduled Nov. 12 launch of Disney Plus.

The series joins other Marvel Studios content set for Disney’s new subscription streaming service, such as a show centering on Jeremy Renner’s Hawkeye, “The Falcon and The Winter Soldier” with Anthony Mackie and Sebastian Stan, and “Loki” starring Tom Hiddleston.

“There’s quite a few other comic books that we’re pulling from and it’s going to be Wanda and the Vision, and I think at the Disney Plus launch chat, they showed a photo of us in the ’50s,” Olsen told Variety. “Paul [Bettany] and I are really excited. They have a great group of writers. I think it’s going to be a total of six hours.”

Olsen previously revealed shooting on the series will begin in the fall.