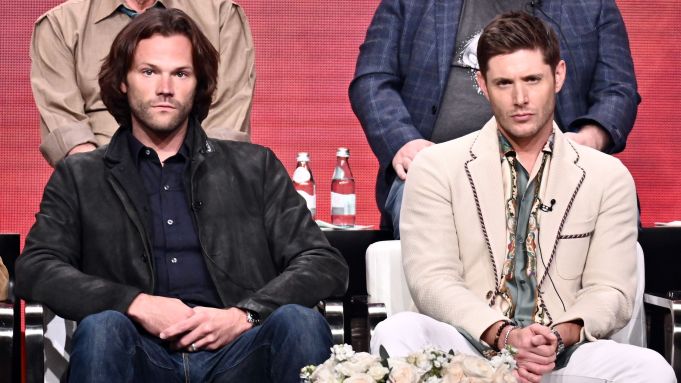 As “Supernatural” prepares to sign off this year, the men behind the show are trying not to let “the weight of what this season is creep into” their daily work on-set, series star Jensen Ackles said at the farewell panel for the CW demon-hunting drama at the Television Critics Assn. press tour Sunday.

Instead, they want to focus on the work, doing what they have done for 14 seasons, rather than try to “reinvent the wheel,” added Ackles.

“I want it to do justice to what we’ve built for the past 14 and a half years, and right now I think the game plan we have is going to do just that. You’re not going to please everybody — you just can’t — but for the majority of the fans that have been with us on this journey, it’s going to feel right and it’s going to feel good. I know that’s how I feel and I’m still excited to tell that story,” he said.

In the show’s earliest days, “Supernatural’s” future was not so certain. Series star Jared Padalecki admitted that he originally thought the show would simply end when they closed the trunk and said, “We have to work to do” in the pilot. The show had not been picked up to series yet, and the pilot process is “such a bizarre thing,” he said.

The show did get picked up, but in its earlier years it was very much a bubble show, filming (and often airing) a finale without knowing if it would see more life. In the later half of the show’s life, that began to shift, with the CW granting the series early renewals.

“One of the blessings, I feel, has been that we’ve known that we’re carrying on so we don’t have to create a false ending every season,” Padalecki said.

Over the seasons, a couple of spinoff ideas were attempted at the network, as well, but they did not go. Earlier in the CW’s TCA tour Sunday, network president Mark Pedowitz admitted he was not looking at other ways to continue the world without Ackles and Padalecki right now.

“There is something very, very humbling about the fact that this show keeps going. We do see a lot of spinoffs on our networks and other networks and in movies, and it’s humbling to think still want us to be a part of it,” Padalecki said.

Added Ackles: “When you have a show that is so anchored, not in a world but around two characters, it makes it difficult to tell the story without those two characters.”

Going into the final season, showrunner Andrew Dabb said the show will pick up “right where we left off, which is our guys surrounded by a bunch of zombies.” In Chuck (Rob Benedict) returning to Earth all of the beings the Winchester Bros. fought and previously vanquished, there were already pops of previous seasons (such as the Woman in White) seeing new life in the Season 14 finale. Dabb said that will continue in the final season, seeing returns to some past characters the audience would not expect. However, one character that the team does not plan to see back again as of this moment is John Winchester (Jeffrey Dean Morgan), who they said had a “pretty perfect” goodbye with his on-screen sons in the penultimate season.

“I’ve got Lucille, and it’s just battling practice,” Ackles told Variety earlier in the day. “We get to a bit of a shelter that’s not real safe, but it’s safe for a moment until we can figure out what to do.”

The boys and Castiel (Misha Collins) are stuck in this temporary shelter, and although “it’s a triage situation first,” Padalecki told Variety to first stay alive, “there are undercurrents of anger, of tension, resentment [that] we’ll get to when we get to.”

Added Collins: “At the outset of the season [Castiel] is working with the boys but also not feeling emotionally integrated, if that makes sense. We have a fight to fight here, but I think there’s a detachment there, too. And that’s hard, and that plays out later in the season.”

The reason for this, he continued, is that “This is an instance in which Jack’s death is so hard on him, but he’s also dealing with Dean being mad at him about Mary’s death, and I think that Cas doesn’t really feel responsible for that: I think he feels he did his best — he was trying — so it’s a rare instance of him not taking the full burden of something.”

Those pieces of the story come in the second episode, although all three men (Ackles, Padalecki and Collins) admitted they hadn’t thought about how much animosity might have been caused by the fact that Chuck aka God answered Castiel’s prayer in the Season 14 finale, after he had failed to answer the brothers’ prayers for so many years.

“I don’t think they’re there yet, to complain about that,” Padalecki said. “I think Sam and Dean, certainly Sam, is more like, ‘Have we been hamsters on a wheel the whole time? Rats in a maze? What have we done?’ I think we then start dealing with questions of, ‘What is free will? Is it all predetermined? Why try hard if it’s all going to turn out the way Chuck decided it’s going to turn out?'”

Added Ackles: “Basically, is everything we’ve done our whole lives now erased — eradicated — because these things are back? All of that work is essentially gone.” This will lead the brothers — and the show — to “tackle” why one should keep fighting if nothing they do matters, to which, Ackles said the ultimate answer is, “This is what they do. Any excuse to give up is not an excuse good enough for them. This is who they are.”

Although Dean and Sam would be willing to spend “years and years and years” fighting all of these things again, as Ackles put it, maybe the bigger question is how to handle Chuck. After all, if they can get rid of the big bad that brought back all of these foes, wouldn’t that ensure the little bads stop coming?

“The season hasn’t been written yet,” Padalecki admitted, “but I feel like we’re after Chuck. We’re trying to get answers. We’re trying to earn our free will, so to speak. So I feel like what’s been really important to Sam and Dean for many, many years was, ‘Hey, we’re making decisions to make the world a better place — to help the people who can’t help themselves.’ And now we’ve been told, ‘You’re just a story I like to watch,’ and now we’re trying to fight for the privilege and responsibility of actually having free will.”

Executive producer Robert Singer noted that in previous seasons, they would always end on a cliffhanger, but in developing the final season, “it’s a different experience.”

“It’s a true ending,” Dabb added. And “in a true ending, people can’t keep coming back over and over again. They’re going to be facing life or death — this time it’s for real.”

Collins was one actor who admitted that he didn’t feel his character needed to survive the series. “It’s funny, but from the very beginning I’ve always imagined that Cas would die right before the end, because I feel like the show somehow needs to end with Sam and Dean alone,” he told Variety. “But I don’t see a lot of people living at the end of ‘Supernatural’ because I think it needs a kind of closure that only definitive death can bring. That’s very morose, but true. I don’t think we want a ‘Game of Thrones’ ending on ‘Supernatural.'”

One thing Collins did say he wanted before the series ended, though, was to see Castiel truly express his loyalty to the Winchesters. “I would love to see him just be able to say, ‘You’re my people. You’re who I care about that.’ I’d love to see him make a sacrifice,” he shared.

The reason they wanted to go out now, Padalecki shared because they didn’t want to be “the last guy at the party.

“This show is going so strong. It’s going so well right now,” he explained. “We’re such a well-oiled machine, we thought it would be almost poetic and indicative of what ‘Supernatural’ is about to say goodbye too soon.”

However, while “Supernatural” as a long-running drama will definitely end in 2020 after the 20-episode 15th season, Ackles said he felt the culture the show has created and the experience of the show is “a long journey that I don’t think is ever going to be over. I just think we’re going to go away for awhile.”

Does this mean the “Supernatural” cast and crew would be open to a limited series revival in a few years or some kind of movie?

“I’m never ever ready to close doors or burn bridges, I think that’s foolish. Am I saying there’s conversations? No. Am I saying I’d be open to conversations in the future? What’s the harm in that?” Ackles said.

The final season of “Supernatural” premieres Oct. 10 on the CW.