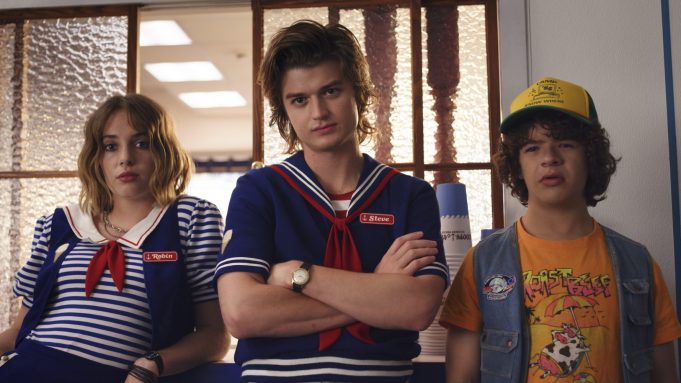 SPOILER ALERT: Do not read if you have not watched Season 3 of “Stranger Things,” streaming now on Netflix.

Agents of the U.S. government have been a key part of the first two seasons of “Stranger Things,” but Season 3 of the Netflix series takes things in a very different direction.

From the opening moments of the season, fans learn that classic ’80s movie bad guys — the Russians — have been attempting to open their own gateway into the Upside Down with little luck. So they decide to attempt to reopen the gateway that was previously opened in Hawkins, covering up their efforts by building the Starcourt shopping mall over their underground base.

While most of the show’s younger stars are busy dealing with the return of the Mind Flayer, a new team of heroes assembles known as the Scoop Troop: Dustin (Gaten Matarazzo), Steve (Joe Keery), newcomer Robin (Maya Hawke), and Lucas’ little sister Erica (Priah Ferguson). The group gets its name from the fact that both Steve and Robin work at the mall’s ice cream shop, Scoops Ahoy.

The group’s adventure throughout the season plays more like an ’80s spy comedy than your typical “Stranger Things” plot, with more comedic moments in this one storyline than perhaps in the entire rest of the series.

“It’s just really fun to watch someone do something really well and then it’s so funny that it catches you off guard,” Keery tells Variety. “Those are the moments when it’s hard to keep it together. In our storyline, it’s a pretty light atmosphere.”

Their story begins with Dustin and Steve trying to decipher a Russian message Dustin picks up on his homemade radio tower that he built to contact his girlfriend from summer camp, Susie (who no one believes exists). Robin gets into the mix when she reveals she is great with languages and is able to translate the Russian message.

“In the beginning I’m kind of a counterweight, taking the piss out of them a little bit,” Hawke says. “I think throughout the season, Robin really opens up and as the stakes get higher she gets more and more vulnerable. Then the relationships get deeper and deeper and by the end, [Steve and Robin] are like dad and mom. Then when we’re on drugs, we’re totally the children. The dynamics of the Scoop Troop shift a lot throughout the story. Each one of us plays a vital role.”

Matarazzo adds: “I look at her like the Cruella to our Jasper and Horace.”

Ferguson commands serious attention in her time onscreen this season, with the diminutive Erica being enlisted by the troop as her small stature allows her to fit into an air vent that has access to a storeroom that serves as the entrance. But while Erica is a take-charge, no-nonsense type, Ferguson’s cast mates insist she is little like her character.

“She is so shy, so sweet, so polite,” Hawke says. “Priah’s intelligence is much softer and kinder. She is so thoughtful and respectful. Her mom is so wonderful. She is a really grounded, special kid.”

The foursome eventually finds themselves trapped underground with the Russians, with Steve and Robin undergoing torture and being injected with a truth serum. Meanwhile, Erica and Dustin work to bust them out.

According to Keery, he “would be Leia” in this scenario.

While all of this is going on, Hopper (David Harbour) and Joyce (Winona Ryder) are working on the Russian problem independently. Joyce suspects something is amiss in Hawkins when magnets keep falling off her fridge. This leads her to consult with local science teacher Mr. Clarke (Randy Havens), inadvertently standing Hopper up for a dinner date.

“It’s even more tragic because of the history that they share and because of how well they know each other,” Harbour says. “If they were to actually get together and then it didn’t work, that would be even worse.”

Their romantic feelings aside, Hopper and Joyce begin investigating and soon discover that the Russians have infiltrated Hawkins. Harbour and Ryder consider their dynamic this season more of a buddy cop vibe, referencing films like “Midnight Run” or “Bird on a Wire,” with the pair pretty much spending the entire season together.

“I was so happy because we had so much together,” Ryder says. “I love the kids — I love Charlie and Natalia — but we got to do so much, and it was really great. There is this thing that they have that they are both really scared of.”

Hopper and Joyce eventually figure out that Hawkins mayor Larry Kline (Cary Elwes) is in bed with the Russians, helping them buy up properties around the town in exchange for kickbacks. Elwes, one of several ’80s stars to pop up throughout the series, says the Duffers approached him to do the series at a fortuitous time.

“I had just finished binge-watching the show with my wife,” he says. “That’s fairly rare for us, but when it does happen, it’s a wonderful thing. So, I was a fan and it turns out I could see all their references. I am a bit of a film aficionado, but they are real film enthusiasts. They have a wide knowledge of film, much wider than me, but at least we bonded on that when we met. Like me, when they like a film, they watch it over and over again.”

After learning the location of the Russian-owned properties, Hopper and Joyce end up inadvertently kidnapping a Russian scientist, taking him to conspiracy theorist Murray Bauman (Brett Gelman). Murray speaks Russian and translates the scientist’s description of the Russian plan to reopen the gate that Eleven closed at the end of Season 2. They then rush back to Hawkins, where they meet up with the rest of the gang.

Joyce, Hopper and Murray infiltrate the underground base, but are stymied when they are unable to open a safe containing two vital keys. The Russian scientist told them the combination was Planck’s constant, but none of them know what it is. Who comes to the rescue? Dustin’s very real girlfriend, Susie.

“It’s a genius plot device to introduce this thing you’re not sure is real and then at the very end, when all hope is lost, that’s the person who supplies the information that you need,” Keery says. “It’s really smart writing.”

Dustin contacts Susie via his radio tower. She knows what Planck’s constant is but refuses to share the information until Dustin does something for her. He resists at first, before finally giving in and signing the theme song from “The NeverEnding Story” over the radio.

“That movie actually scared the crap out of me,” Matarazzo says of the classic ’80s fantasy film. “I love horses to this day because of that movie. I was so young and I thought stepping into a mud puddle and being sad would kill me. The horse sinks into the Swamps of Sadness!”

After Susie rattles off Planck’s constant, Hopper and Joyce rush to destroy the machine being used to reopen the gateway. But a monstrous Russian that has been pursuing them all season attacks, leading he and Hopper to a no-holds barred brawl while Joyce tries desperately to turn the keys and destroy the machine.

“We had some improvs when I’m beating him up at the end and I grab him and say, ‘I’ll see you in hell’ before I throw him in the thing,” Harbour says. “There were a couple where I said, ‘Happy July Fourth, motherf—er’ or ‘you commie piece of s—!’ There was something about this Independence Day thing, fighting the commies, it was so ’80s — this ‘Red Dawn’ communist presence that good red-blooded Americans had to fight against.”

Hopper does defeat the Russian, but he cannot get back to safety before Joyce destroys the machine. She and Hopper share one final look before the machine explodes. Joyce is devastated, but the Russians and the Mind Flayer have been vanquished.

Hopper’s story may not end there, however. Harbour stayed mum about his true fate, but a tag at the end of the season at a secret Russian base shows a row of cells, with the guards bypassing the one containing “the American.” They instead grab a Russian man, throwing him into a cage with a fully-grown Demogorgon.