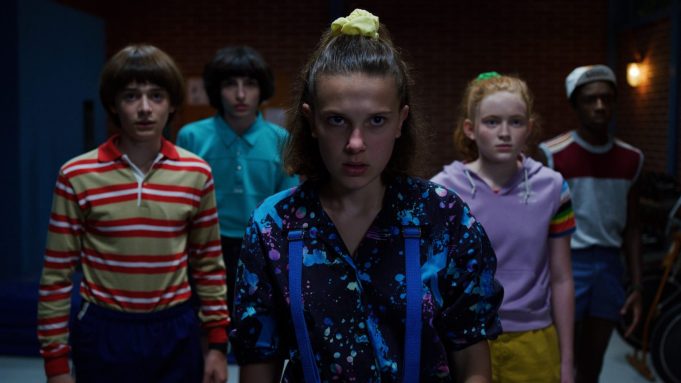 SPOILER ALERT: Do not read if you have not watched Season 3 of “Stranger Things,” streaming now on Netflix.

“Stranger Things” has introduced some very memorable monsters in its first two seasons, but Season 3 just might top them all.

In the third season of the megahit Netflix series, the dreaded Mind Flayer is back but in a new form. The kids deduce that after they drove the Mind Flayer out of Will’s (Noah Schnapp) body in Season 2, a part of the creature was left trapped in the human world when Eleven (Millie Bobby Brown) closed the gateway to the Upside Down. That part of the creature slowly gained strength in the shadows and assembled a physical body, starting by infecting every rat in Hawkins — forcing the rats to ingest household chemicals before they are drawn to an old steel works, where they subsequently burst into little puddles of goo that eventually glom together into a creature resembling its shadowy Upside Down form.

“I remember the Duffers showed me the rats exploding on their phone, and it was pretty close to how it looked in the show,” Finn Wolfhard, who plays Mike, tells Variety. “And I told them ‘Oh my God, guys, this is amazing!’ I was freaking out. It was disgusting, but awesome. It was great.”

Such body horror imagery is a consistent part of Season 3, with the cast stating that the Duffer brothers were looking to incorporate elements of classic horror films like “Invasion of the Body Snatchers,” “Evil Dead” and “The Fog.” The Mind Flayer eventually moves on from rats, though, and begins infecting older residents of Hawkins, whom the kids dub “the flayed.” But chief of all the flayed, and the Mind Flayer’s initial victim this season, is Billy Hargrove (Dacre Montgomery).

“The story arc I had this season is what any actor would hope for,” Montgomery says.

Montgomery shares that there was discussion about Billy getting infected earlier in the show’s run, and he had conversations with the Duffers about such an arc during Season 2. But during that season, “we ended up going to a place of humanizing Billy with that scene with his father,” Montgomery recalls. “Then in Season 3, the Duffers had always said, ‘This is where we’re going to go with it.’”

Nancy (Natalia Dyer) and Jonathan (Charlie Heaton), now both employees at the local paper, are the first to suspect something is amiss when an elderly woman calls in about rats behaving strangely in her basement. Their investigation is stymied by the paper’s all-male editorial team, who mockingly refer to Nancy as “Nancy Drew” and relegate her to fetching coffee and other menial office tasks.

“Any woman has gone through that in some way shape or form,” Dyer says. “We generally live it. That attitude exists. Some of those scenes felt too real. In the world I’ve been working in, I haven’t felt that too much, but my mother, my sister, my friends, they all have these stories as well. I am glad they threw it in there because the screen is a powerful thing.”

Nancy and Jonathan also find themselves navigating the day-in-day-out struggles of an adult relationship this season, with Heaton joking that when he first read the scripts, he thought hey sounded “like an old married couple.”

“Being together in this work environment, coming from different backgrounds, they may not understand each other a little bit,” Heaton says. “But when it all comes together, those differences don’t matter because they love each other.”

Yet, there are also some lighter romantic moments this season, such as Mike and Eleven’s tumultuous teenage romance. They begin the season as an inseparable couple, but after Hopper (David Harbour) has a little chat with Mike, he begins avoiding Eleven in order to avoid Hopper’s wrath. This leads Eleven to break things off with Mike and begin spending more time with Max (Sadie Sink). Mike and Lucas (Caleb McLaughlin) desperately try to figure out how to win their women back mostly to comedic effect. According to Wolfhard, getting to play the relationship scenes with a more comedic tone was a nice change.

“I was really excited because I got to do some comedy, and I had never gotten to do that on ‘Stranger Things’ before,” he says. “I loved how their relationship was paced and how they’re together on this mission but they’re not together-together.”

This season also touches on a very important part of childhood — the time to leave it behind. In particular, Will is left alienated from his friends when they do not share his enthusiasm for hanging out in Mike’s basement and playing “Dungeons & Dragons” anymore.

“I think for Will, he’s trying to hold onto his childhood,” Schnapp says. “Will was stuck in the Upside Down while they were all bonding and now he just wants to go back to how it was before and nothing ever changed. The others are all ready to move on and start dating and so now he feels excluded.”

The young cast admits that even though their characters are living in a genre world full of supernatural challenges, they can still use their own experiences in adolescence to inform their performances.

“I think that the kids on the show are forced to mature a lot faster because they’re dealing with all these monsters and different dimensions,” Sink says. “We can kind of relate to that in a way because we’re not dealing with monsters, but we are dealing with the show’s success, so we have to mature a bit faster.”

Adds McLaughlin: “I see Lucas in me a little bit in the way he gives Mike advice, like dating advice. I do that with Finn sometimes. I’ll be like, ‘Finn, let me talk to you, man.’ So it was good to do that on film because I have great times just giving Finn advice on set.”

As the season goes on, however, the horror gets ratcheted up to…11. The flayed humans of Hawkins drop everything the night of the Fun Fair put on by Mayor Kline (Cary Elwes) and head to the steel works, where one by one they burst just like the rats and help create a giant Mind Flayer made of the melted flesh of both human and vermin. The creature chases after the kids and stages an epic battle with them at the Starcourt Mall, with flayed Billy joining the fight as well. But after Eleven reminds Billy of his real mother — a memory Eleven was able to access with her powers — Billy is able to break from the Mind Flayer’s grasp and save Eleven.

Montgomery shares that he studied cases of split personalities and bipolar disorder in order to better capture the struggle going on within Billy.

“I tried to make the struggle evident going back to the scene in Hopper’s cabin where I’m walking towards her,” he explains. “At the end of that piece, right before she flicks me across the room, it’s all flayed Billy but in my eyes, I tried to force out as much emotion as I can as if I’m trapped. All the way through the season I’m trapped until I get up and as I’m dying and say ‘I’m sorry,’ that’s the version of Billy that was trying to get out.”