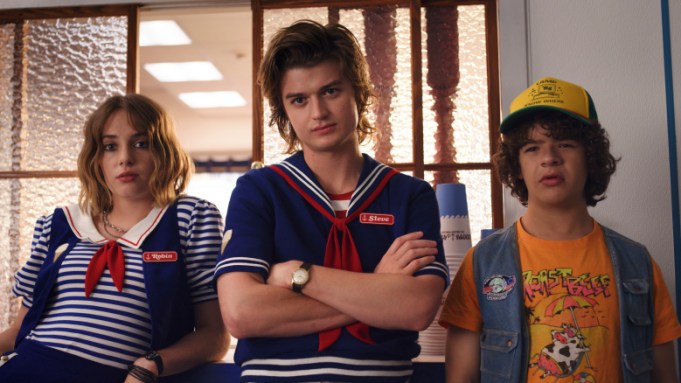 Two weeks out from the premiere, Netflix has released a darker trailer for “Stranger Things” season 3.

The three-minute long clip almost feels like it’s promoting an action movie, with things clearly set to take a more harrowing turn in the town of Hawkins.

All the gang are back once more: Eleven (Millie Bobby Brown), Mike (Finn Wolfhard), Lucas (Caleb McLaughlin), Max (Sadie Sink), Will (Noah Schnapp) and Dustin (Gaten Matarazzo). But this time, they are going to have to fight harder than ever to keep the evil monsters from the Upside Down at bay.

“No matter what happens, we have to stop him together,” says Mike.

The trailer ends on an extended, Jurassic Park-esque sequence in which the crew hides from an unseen monster on the prowl. As the trailer cuts violently to black, the creature’s horrific roar is left sounding in the audience’s ears.

Netflix also released the following blurb to set the scene for the upcoming season:

“It’s 1985 in Hawkins, Indiana, and summer’s heating up. School’s out, there’s a brand new mall in town, and the Hawkins crew are on the cusp of adulthood. Romance blossoms and complicates the group’s dynamic, and they’ll have to figure out how to grow up without growing apart. Meanwhile, danger looms. When the town’s threatened by enemies old and new, Eleven and her friends are reminded that evil never ends; it evolves. Now they’ll have to band together to survive, and remember that friendship is always stronger than fear.”

The episode titles for the third season, which premieres July 4, are as follows: “Suzie, Do You Copy?,” “The Mall Rats,” “The Case of the Missing Lifeguard,” “The Sauna Test,” “The Source,” “The Birthday,” “The Bite,” and “The Battle of Starcourt.”

“Stranger Things” has been nominated for 10 Emmys and won six Creative Arts Emmys to date. Season 3 season comes after the cut-off date for this year’s Emmys, meaning it will compete at the 2020 awards. The show has also received four Golden Globe nominations.