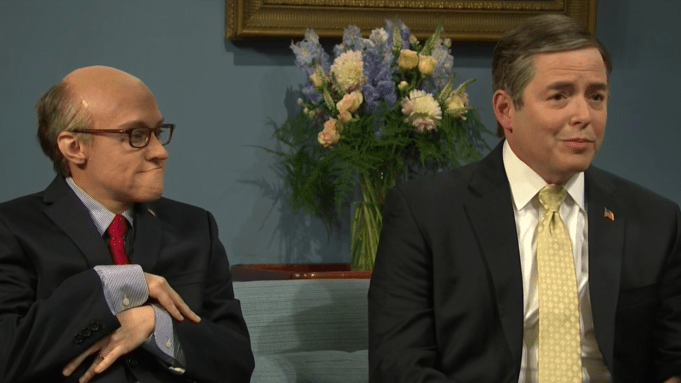 The second episode of “Saturday Night Live” opened with another impeachment related sketch, this time taking place in the office of Vice President Mike Pence.

Pence (played by Beck Bennett) gathered Rudy Giuliani (Kate McKinnon) and Attorney General William Barr (Aidy Bryant) for a crisis meeting to decide how they’re going to deal with the ongoing impeachment proceedings against the President.

Later in the sketch, Matthew Broderick joined the party as Mike Pompeo, quipping that he is desperate to find an alternative country to live in in case the impeachment proceedings force him out of the U.S.

“Impeachment happens pretty fast. If you don’t stop to look around, you might miss it,” said Broderick’s Pompeo, referencing the iconic line from Broderick’s career-making role in “Ferris Bueller’s Day Off.”

McKinnon’s Giuliani (and Bryant’s Barr expressed surprise that Pompeo could make it given that he has been subpoenaed as a part of the inquiry. However, much like the evasive Ferris Bueller, Pompeo managed to give the inquiry the slip by replacing himself with a creepy mechanized version of himself.

The members of Trump’s inner circle brainstormed some ideas as to how to get out of the current impeachment predicament.

“We need to close ranks, like the Mafia,” suggested said McKinnon’s Giuliani.

“Except the Mafia was like smart, they didn’t go on Fox News and tell people the crimes before they did them,” replied Broderick’s Pompeo.

The assembled company decided that the one thing they needed to do was at least “get their stories straight.”

“Even if they’re not straight now, they could still be converted to straight right,” said Bennett’s Pence, referring to allegations leveled at the Vice President of being in favor of “conversion therapy.”

Also making a brief appearance in the sketch was Ben Carson (Kenan Thompson), who seemed to have forgotten what his role is in the current administration.

“I’ve been sitting in my empty office for three years, does anybody know what my job is supposed to be,” asked Thompson’s Carson.

The assembled company replied with shrugs and indifference.

At one point, Giuliani left the VP’s office to go and appear on Fox news, before returning in Joker make up saying that he had killed Sean Hannity. The “Joker” film, which has drawn controversy for its violent scenes, hit theaters yesterday.

Trump’s senior policy advisor Stephen Miller came in near the very end of the sketch to offer Pence some advice. Only he appeared in the form of a snake popping his head out of a basket, hissing to Pence about what his solution to the impeachment debacle might be.

Later in the show, weekend update with Colin Jost and Michael Che continued the impeachment discussion. Che likened Trump and his actions to the character of Lennie in “Of Mice and Men,” while Jost read a joke that the media might soon start referring to the President as “former President Trump,” in response to Trump saying this week that he would now be referring to the media as “the corrupt media.”

Jost also cracked a joke about Senator Bernie Sanders and the recent revelation that he suffered a heart attack while on the campaign trail in Las Vegas. McKinnon reprised the role of Sanders’ rival for the Democratic nomination, Senator Elizabeth Warren, to address the fake sex scandal which emerged this week.

Recent Emmy winner and “Fleabag” creator Phoebe Waller-Bridge was the host of this week’s show, and Taylor Swift was the musical guest.