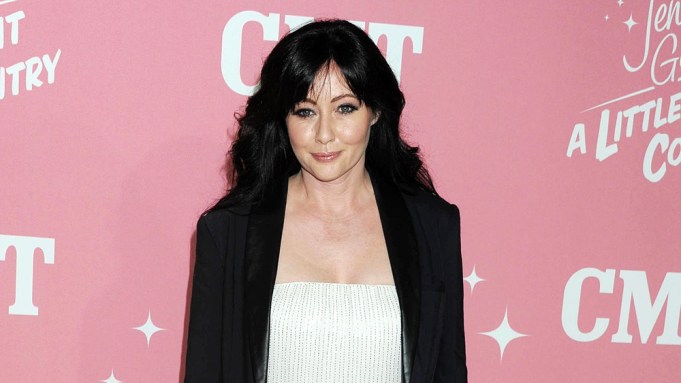 “Riverdale” is planning to make a special tribute to Luke Perry.

The show’s executive producer Roberto Aguirre-Sacasa announced at Comic-Con that Shannen Doherty, Perry’s longtime friend and “Beverly Hills 90210” co-star, will guest star in the season 4 premiere. The tribute episode will “reflect Perry’s enduring legacy and the indelible imprint his character” Fred Andrews had on the series. Precise details on Doherty’s character are being kept under wraps, but Aguirre-Sacasa described it as “very emotional.”

Perry died in March, 2019 at the age of 52 after suffering a major stroke. At the time, Doherty expressed that she was “struggling with this loss” and that “processing (it) is impossible.”

Aguirre-Sacasa revealed that he and Perry had been planning to have Doherty on the show for some time and that her presence in the series is “something that Luke wanted to happen since season 1.” Perry played the father to KJ Apa’s Archie.

“They were such good friends, and when we were putting together this tribute episode, we wanted to make it as special as possible, and so we asked Shannen to do a pivotal, super-emotional role. She read the script and immediately said ‘yes.’ It’s very impactful,” said Aguirre-Sacasa.

Doherty will star in the “BH90210” reboot series, alongside original stars Jason Priestley, Jennie Garth, Ian Ziering, Gabrielle Carteris, Brian Austin Green and Tori Spelling, which is coming to Fox later this year and will also honor Perry in some form.

The panel kicked off with Aguirre-Sacasa unveiling a video of Perry’s best moments from the show which was played for the cast during last season’s wrap party.

“When Luke passed it was toward she need of season 3 and we thought rather than rush an episode in we would take our time,” the showrunner said. “We really wanted to honor Luke, to honor Fred and we wanted it to be a standalone, really emotional, really focused on what this character meant to this group of people.”

Cole Sprouse, who plays Jughead Jones on the show, discussed what it was like working with Doherty.

“It was cathartic for all of us, it put the cherry on top of that episode and made a nice tribute. She was overjoyed to have the ability to share some of the burden of Luke’s passing that she had gone through in a cathartic setting with the rest of us,” Sprouse said.

Aguirre-Sacasa revealed that Molly Ringwald will step into a more prominent role in season 4 and become a “more or less full time mom” to Archie this season.

Madelaine Petsch, Cheryl Blossom in the show, talked about being paired with Perry for her first Comic-Con and how he helped calm her nerves.

“He told me, ‘See, none of it even matters, just do whatever you want and don’t take it too seriously,’” Petsch said.

In other casting news related to The CW series, Kerr Smith (“The Fosters, Life Unexpected”) is joining season 4 in the role of Riverdale High’s new principal Mr. Honey. Smith will make his first appearance in the recurring role in episode 2. His character is described as “a bit of a hard-ass who takes a harder line with the students this year, especially with the seniors.”

For the rest of the panel, Aguirre-Sacasa and co. teased what’s to come in season 4 including the fact there will “definitely be” a musical episode as in previous season.

Based on the Archie Comics characters, the show hails from Berlanti Productions in association with Warner Bros. Television and CBS Television Studios. Aguirre-Sacasa, Greg Berlanti, Sarah Schechter and Jon Goldwater are executive producers.