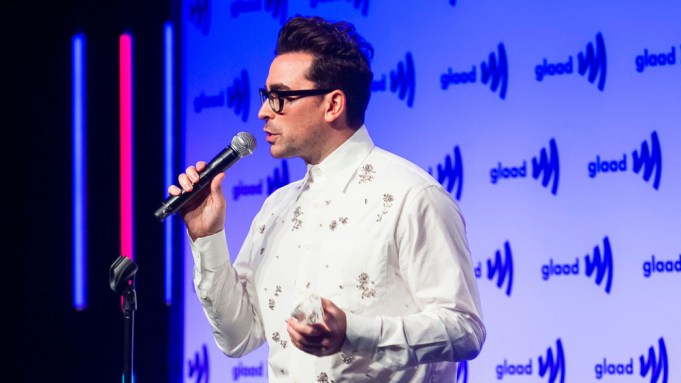 “Schitt’s Creek” creator and star Dan Levy wasn’t always as out and proud as his on-screen character.

In fact, David’s suave demeanor and clean-cut confidence was a long ways off when Levy first began grappling with his sexual identity.

“Standing up here, it’s hard not to think back to a very specific time in my life when I was still in the closet. I was in high school, I had a bad faux-hawk because the first ‘Mission: Impossible’ movie had just come out and I thought Tom Cruise was a real drink of water,” Levy joked Saturday night as he accepted the Davidson/Valentini Award at the GLAAD Gala San Francisco.

Levy continued, “When I was falling in love with my best friend and instead of being able to do anything about it, I watched him fall in love with someone else, because I didn’t have the courage to act publicly on my feelings. Thinking back to those formative days, where I was missing out on the good stuff because I was walking around with an invisible rain cloud over my head, smiling through the heartbreak so as to avoid anyone asking me what was wrong. Because I didn’t have the strength to tell them.”

Long before the Emmy nominations, the cult fandom and the ever-popular “Ew, David!” ever graced the small screen, Levy was experiencing the same pressures that many LGBTQ youth face today.

“I legitimately thought that I would have to live with this secret — my being gay — for the rest of my life because I didn’t have the security of seeing a lot of people like myself being celebrated in popular culture,” he said.

But Levy wasn’t alone. The “Schitt’s Creek” actor was quick to thank his friends and family who “loved [him] fiercely and unconditionally” and who he credited with helping him find his way out of the closet, a supportive experience that Levy recognized isn’t always the norm when it comes to coming out stories.

Levy drove home his point with several statistics: Almost three quarters of LGBT youth say they are more honest about themselves online than in the real world, Levy said, and 40% of transgender adults reported having made a suicide attempt, with 92% saying it happened before the age of 25. So when it came to making “Schitt’s Creek,” “a place where everybody fits in,” Levy’s character David seemed like a good place to start.

“When I found myself in a position to tell stories on a global scale, I seized the opportunity to make a television show that might, in its own way, offer some support, encouragement and love to those who might not have it in their homes or in their schools or in their day to day lives,” Levy said. “It’s a place where acceptance incubates joy and creates a clarity that allows people to see themselves and each other more deeply. It’s fiction, yes. But I’ve always been told to lead by example and this felt like a good place to start.