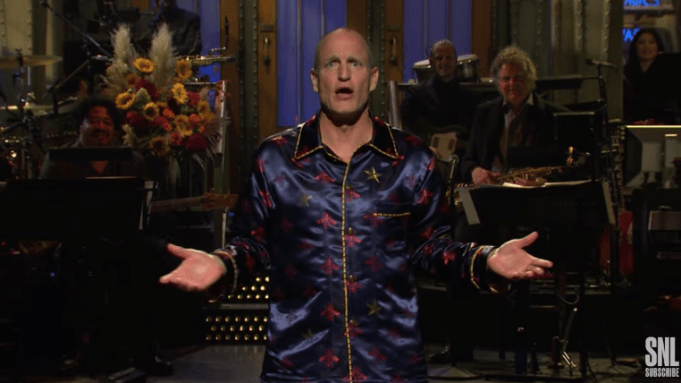 Before “Saturday Night Live” debuted its 45th season, it was already making major headlines with its decision to hire Shane Gillis, a comedian and podcaster who, just months before booking this high profile gig, had been using racial slurs online. Just days after he was hired, he was fired from the late-night NBC sketch comedy show — although he was back on-stage doing standup. Therefore, all eyes were on the season premiere episode, to see if and how the late-night NBC sketch comedy show might address the controversy.

The closest the episode came was with guest host Woody Harrelson’s monologue. It started simply, with Harrelson claiming to now be a fashionista after being on the worst dressed list — “many times, for good reason.” He noted that he always thought there were more important things to focus on, such as “the ice is melting; the Amazon is burning; our water, food and air are polluted.” And although he spent another minute or so talking about fashion and pulling off his tuxedo to reveal pajamas underneath, he soon began speaking about more important things, albeit in a slightly subtle way.

“I’m used to saying other people’s words. I’ll even do it later in the show. You’ll see,” he said. But, he noted, “the monologue is the only time I’m speaking for myself.” Although he said writers offered to help him, “I’m poised. I don’t wear the wrong thing, and I don’t say the wrong thing.”

This, naturally, led into a two-and-a-half minute bit in which Harrelson did proceed to say somethings that are perceived as wrong today, starting with noting he “didn’t just get off the boat.” But each time he said something that could be taken as offensive, he immediately attempted to explain or apologize, which often led right into another faux pas or slip of the tongue.

“That sounds like I’m slandering immigrants; I’m not. I think immigrants make this country great. But let’s face it, most of ’em, they don’t come by boat anymore, they just walk right in. We see that every day on the news. Well, Fox News anyway,” he said. “Oh geez, if what I just said offended Fox News viewers, I apologize. And if I hurt the one Fox News viewer who’s also an immigrant, then I apologize to you, Madam First Lady.”

Harrelson noted that Melania Trump is “a white immigrant,” which “still counts,” but then went on to say he doesn’t know why people are worried about Mexico when “the Chinese are taking over everything.” For Harrelson, this started at home, because his wife and daughters are Asian.

His demeanor was jovial and the smile on his face kept things light, but the words certainly lent themselves to being commentary on how being cognizant of people’s sensitivities is affecting today’s speech, let alone comedy.