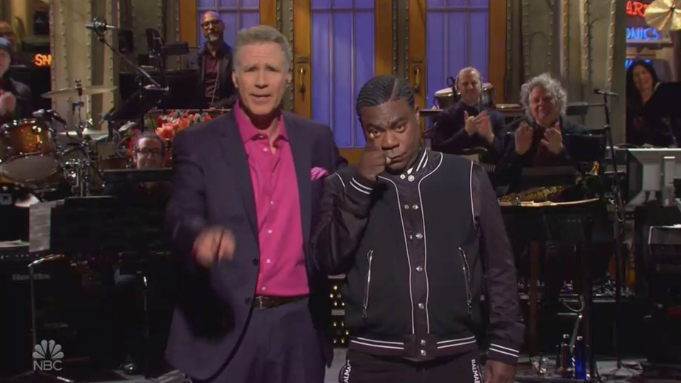 Will Ferrell joined the infamous “Saturday Night Live” Five-Timers Club with his Nov. 23 hosting stint. But he was far from the only big name to return to Studio 8H for the episode.

Ryan Reynolds, who hosted “SNL” in 2009, was in the audience during Ferrell’s monologue and promptly distracted the former cast member, causing him to ask multiple times if it was really him. Reynolds said that he gets that a lot, but yes it is really him, and he’s a big fan.

“Can you just pretend I’m not here?” Reynolds asked Ferrell.

“No way, I’m locked in. It’s like the rest of the audience is not here,” Ferrell replied.

Ferrell then slipped into an impression of Tracy Morgan, noting that that is what happens when he gets nervous. Reynolds asked him not to do that, to which Ferrell replied, “Will Ferrell can do whatever he wants.”

Morgan then joined Ferrell on stage with Ferrell to back up Ferrell’s claims: “You listen to me. The prophecy must be fulfilled. This is Will Ferrell, he can do what he wants to do. I suckled from his comedy bosom, but like a young Luke Skywalker, it filled me with strength.”

Ferrell thanked Morgan for that, telling him he felt so much better.

“Anything for you, Ferrell. But you talk like that again, I’m going to bust your ass,” Morgan said.

“As you should. Yes, yes,” Ferrell said.

Elsewhere in the episode, Alec Baldwin reprised his role of Donald Trump, one that he has played since 2016 but only sporadically this season, while a democratic debate sketch was star-studded with the likes of Maya Rudolph, Rachel Dratch, Fred Armisen, Woody Harrelson and Larry David. Reynolds also took a seat at the “Weekend Update” desk to play “Guy Who Knows the Owner.”