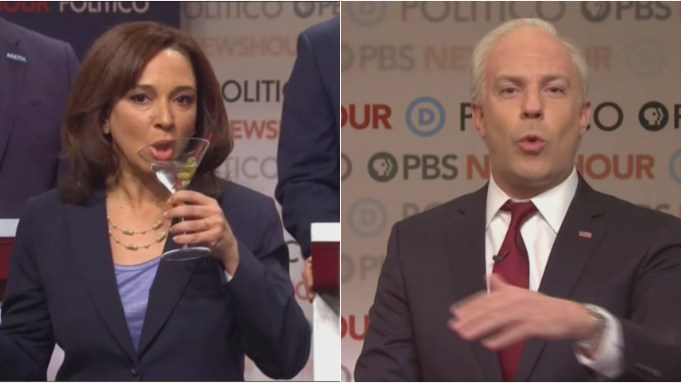 “Saturday Night Live” kicked off its final episode of 2019 with a cold open sketch dedicated to the sixth democratic debate where moderator Judy Woodruff (Heidi Gardner) noted, “Just like ‘The Bachelor,’ the further we go, the less diverse it gets.”

Eddie Murphy, who hosted the episode, wasn’t the only returning “SNL” player to grace the stage at Studio 8H: Rachel Dratch reprised her role as Amy Klobuchar; Maya Rudolph returned as Kamala Harris (despite Harris having dropped out of the race); Fred Armisen came back as Michael Bloomberg; and Jason Sudeikis stepped in to play Joe Biden.

“Notice anything different about me?” Sudeikis’ Biden said. “Grandpa Joe got the glow up. I was ‘Irishmaned’: younger, yep; taller, sure; better, eh.”

When Armisen’s Bloomberg was asked how he got to the debate after not actually qualifying for it, he said that “for $30 million PBS is now owned by viewers like me.”

Larry David also reprised his role as Bernie Sanders, who announced, “I’m white — can’t help it. Let’s move on.” He also commented on climate change: “Look at me, are you really surprised that my main concern is the temperature? At my house, I have a Sharpie on the thermostat so I know if you move it.”

And Alec Baldwin made an appearance as Donald Trump to address (and deny) his impeachment. “You think I’m afraid? You think I’m nervous? What are they going to do, impeach me? Hello, losers. Impeach me outside,” he said in a nod to Danielle Bregoli’s “Dr. Phil” appearance. He then went on to call the candidates names and tell them they were going to get “Donald Trump raw.”

Before starting the debate, Gardner’s Woodruff asked if anyone wanted to “prove that they’re presidential by starting a petty little fight?” To this, McKinnon’s Warren raised her hand immediately — to point out that Buttigieg “held a billionaire fundraiser in a wine cave with crystals, candelabras — basically ‘Eyes Wide Shut’ minus any sex appeal whatsoever.”

Jost’s Buttigieg responded by saying he lives on his mayor salary “plus a $20 a week allowance from my parents — and that’s only if I do my chores.”

Meanwhile, Dratch’s Klobuchar chimed in to say that the only cave she goes to is a man cave, namely the Senate. “For more of these classic zingers, please check out my standup special,” she said.

But Sudeikis’ Biden stood up for Buttigieg, saying, “The kid’s trying his best.” He then went into a rambling, vaguely racist story that had nothing to do with Buttigieg, nor the debate, but did prompt Yang to use it as an example of why there is a need for more diversity on the stage.

“Oh, this is a debate? Honestly, I had no idea. I was just in the neighborhood. But while I’m here, I just want to show you how good you could have had it, America,” she said. “You could have had a bad bitch.”

Although Trump became the third president to be impeached earlier in the week, many of the candidates admitted they didn’t think they could beat him in the 2020 election. Armisen’s Bloomberg said he was just doing this to “get my steps in,” while David’s Sanders called Trump the “most corrupt president in our history” but noted everyone lies, from Amazon to his iPhone, which “stays on for at least 20 minutes” when it says it’s at 1% battery but other times “it’s at 7%, shuts down immediately. Go figure. Apple, what are you trying to hide, and what is my password?”

But Baldwin’s Trump did appear a bit concerned by McKinnon’s Pelosi. She brought him the articles of impeachment, but noted that “you know how sometimes you give a gift but you like it so much you want to keep it as a gift for yourself?”

“Watch me. And good luck at the State of the Union,” she replied.