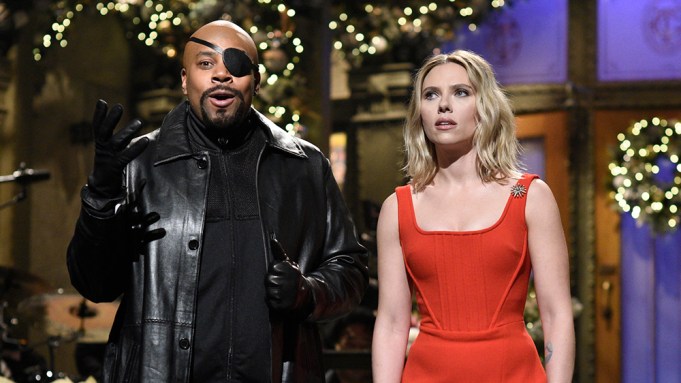 Scarlett Johansson hosted “Saturday Night Live” for the sixth time on Dec. 14 and kicked things off with an “Avengers”-themed monologue.

Stepping out on stage at Studio 8H in New York City, Johansson was first joined by Aidy Bryant who did a quick change from her cold open snowman character into Elf on the Shelf. She and Johansson talked about how good Johansson had been this year (without referencing the actor’s recent controversy over saying she would work with Woody Allen, despite sexual misconduct allegations against him), but very quickly Bryant began to dissolve.

Bryant was the first in a long line of “SNL” cast members to disappear in this way, due to what turned out to be Pete Davidson wearing Thanos’ glove. At first Cecily Strong thought “this was just one of those weeks” Davidson wouldn’t be appearing in the show, but it turned out he was the troublemaker all along.

Other cast members to dissolve included Alex Moffat, Beck Bennett and Bowen Yang, who commented, “”First Asian cast member and you guys are dusting me? Twitter is going to eat you alive,” as he disappeared.

Kenan Thompson portrayed Nick Fury in the monologue, while both “Weekend Update” co-anchors (and series co-head writers) Michael Che and Johansson’s fiance Colin Jost joined her on stage as themselves. She greeted Che with a big hug to tell him she was glad he was OK, while Jost got a kind of awkward acknowledgement.

Johansson first called Thompson “Samuel L. Jackson” and then asked the name of the character he played, to which Jost asked if she watched the movies she’s in.

Signing off from stage, Johansson pointed out how much she enjoys coming back to “SNL,” which was where she “met the love of [her] life.”