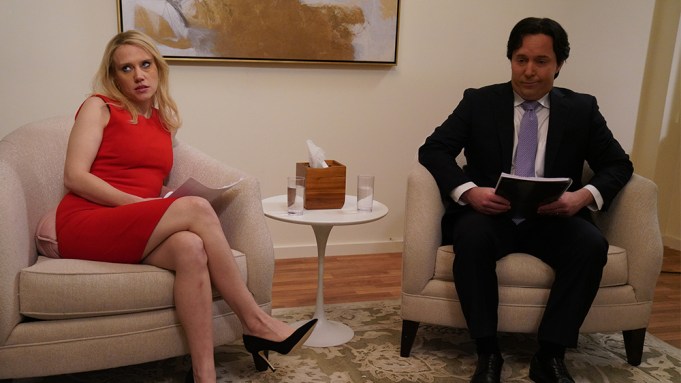 Scarlett Johansson may be nominated for a Golden Globe for her performance in “A Marriage Story,” but when she hosted the Dec. 14 episode of “Saturday Night Live,” she slid into a less flashy role for that sketch comedy’s parody of the new dramatic film.

Johansson took on the role of therapist to Kate McKinnon’s Kellyanne Conway and Beck Bennett’s George T. Conway II in a digital short parody entitled “A Conway Marriage Story.” She kicked off the sketch asking Bennett’s George to list what he loved about his wife, which he began with, “she works so hard for her boss, even though I hate his guts.”

When it was McKinnon’s Kellyanne’s turn, she first said what she loves about her husband was “he always leaves his coffee mugs around [and] he actually always tells me what he thinks about me to my face.”

Clips of the couple in their regular, daily lives included dining out at a restaurant, with Kellyanne catching George subtweeting her from across the table, cutting each other’s hair and coming up with “pet names” for each other, such as “loser” and “ghoul.”

They highlighted things they do agree on as well, such as “small government and no food for poor.”

And Bennett’s George noted that he event loves their fights, which was a piece of narration over a screaming match about Donald Trump, in which McKinnon’s Kellyanne says he was the one who introduced them and Bennett’s George notes he “didn’t know he’d be president,” but then dissolves into a complaint that George “isn’t even verified on Twitter.”

This particular fight turned sexual after they heard on the news that articles of impeachment were just introduced.

Both Conways thought Johansson was actually a reporter, but when she pointed out that she was a therapist and “what you say doesn’t leave this room,” McKinnon’s Kellyanne said, “Then why are we doing this?”