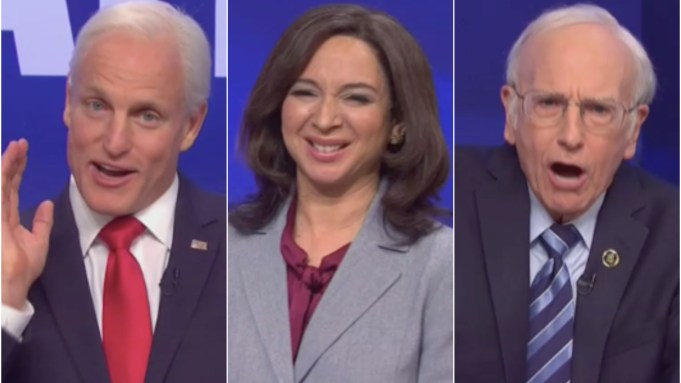 Who can beat Donald Trump in the 2020 election? “Saturday Night Live” took a crack at this tough political question in a democratic debate sketch in the Nov. 23 episode that saw the return of former cast members Maya Rudolph, Rachel Dratch and Fred Armisen (as Kamala Harris, Amy Klobuchar and Michael Bloomberg, respectively), and both Woody Harrelson and Larry David reprising previous guest performances as Joe Biden and Bernie Sanders, respectively.

“I know in past debates I was accused of being over-ambitious,” McKinnon’s Warren said. “I’ve got ‘Mom hosting Thanksgiving’ energy: I’m a little overwhelmed because I thought 10 people were coming and now there’s 30 million. But I promise dinner will be ready if you just get out of the kitchen and stop asking questions.”

Rudolph’s Harris was in a particularly good mood, noting, “The funt is back: America’s fun aunt. I’m also America’s cool aunt: the cah — you know what, let’s not do that. I’m not going to worry about the polling numbers. I’m just going to have fun and see if I can get some viral moments. Mama needs a GIF. Gonna tell my kids this was Michelle Obama.”

Each democratic presidential hopeful got a moment to stand out in this sketch. Jost’s Buttigieg, for example, was asked why he was polling so low with black voters. “Maybe just because of this,” he said, gesturing to his face.

David’s Sanders began by thanking everyone for the well wishes after his heart attack. “Doctors were surprised I made it,” he said. “And I’m very proud of the fact that I was the first heart attack patient to show up to the emergency room in a city bus.”

When it was Dratch’s Klobuchar’s turn, she made it memorable by saying, “I know some of you think I’m shaking because I’m nervous, but this is just my signature quivering bang. It’s my Spidey sense that tingles whenever we need a moderate to say, ‘Girl, we can’t pay for that!'”

Meanwhile after flashing his teeth at the debate moderator, Harrelson’s Biden said he just wanted everyone to know that he sees them. “And I see the faces you all make when I talk; you’re scared — scared I’ll say something off-color or even worse, on-color. What I want you to know is you should be scared because I’m always one second away from calling Cory Booker Barack.”

Redd’s Booker crammed in a few buzzwords because he knew he wouldn’t have much time to speak, while Yang said “what up” to his “Yang gang,” and Strong’s Gabbard was introduced as “the night’s villain” and noted she was “wearing the white suit of your fallen hero, Hillary Clinton. Now fight me, cowards.”

Ferrell’s Steyer said running for president is “fun” and “gets me out of the house.”

Ferrell’s wealthy philanthropist Steyer was the perfect entry point for Armisen’s Bloomberg, who literally walked on with “Did somebody say billionaire?” When asked how he even got in, Armisen’s Bloomberg said he “tipped the doorman $30 million.” But he still wouldn’t confirm if he was officially running for president, saying, “Maybe, maybe not. I’d be hard to beat. I’d love to see those Trump supporters come up with a conspiracy theory about a Jewish billionaire with his own media company. Good luck making that stick.”

Each candidate also got a chance to speak directly to America to explain why they should be the democratic pick for the next election, which you can see in the clip above.