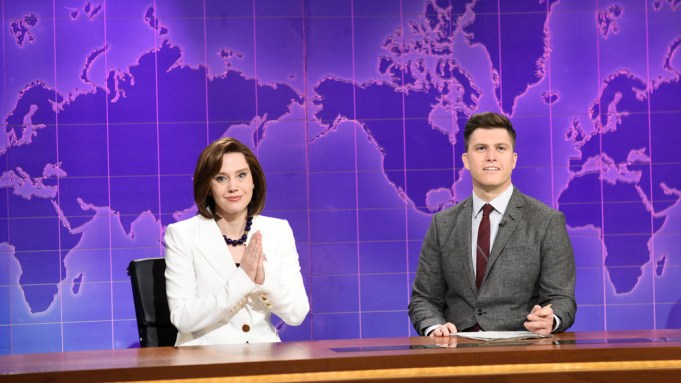 “Saturday Night Live” cast member Kate McKinnon resumed her role as Speaker of the House Nancy Pelosi in the Dec. 7 episode to offer a few prayers for Donald Trump.

During the “Weekend Update” segment, co-anchor and “SNL” co-head writer Colin Jost first commented on Pelosi being asked if she hated President Trump during her most recent weekly press conference. Jost noted that she fell back on her religion, saying that Catholics don’t hate anyone. Jost, though, said that if this was really being handled the way Catholics deal with things, Trump would just be “quietly transferred to a different presidency.”

But a little later in the segment, McKinnon’s Pelosi took the stage to address the issue first-hand, noting first that she doesn’t know “who self-identifies as a journalist these days.” She also pointed out that she is “not impeaching Trump because I hate him — I’m impeaching Trump because rules.” To further explain this point, she added: “It is Trump’s fault. It’s not the lifeguard’s fault for evacuating the pool; it’s the rich kid, for taking a dook in the deep end.”

But when Jost said he has heard Pelosi prays for Trump, McKinnon admitted that is true and decided to say a prayer for him right there on stage. She bowed her heads, clasped her hands together, and the lights changed color around her.

“If he has to be president, please make him be a little better at any of it,” she began. “And please take him — not to Heaven, just somewhere else, just for a little while. Mama needs a break.”

Continuing, McKinnon’s Pelosi asked the lord to teach Trump values “and the Golden Rule — what it is and that it is not a sex thing. Help him with his cares and concerns — like help him to have those about anyone and anything. Here’s an idea: Maybe place a curse on him like the movie ‘Liar Liar,’ where he’s forced to tell the truth for just one week. Come on, Lord, even you know that’d be funny.”

Although Jost said these sounded passive aggressive, McKinnon’s Pelosi acknowledged some of her prayers for him are “aggressive-aggressive.”

But it wasn’t just Trump for whom she offered thoughts and prayers. She also asked the lord to “heal the republicans in the senate who all tragically lost their balls” and to “bless Lindsey Graham with a baby who’s black and gay.”