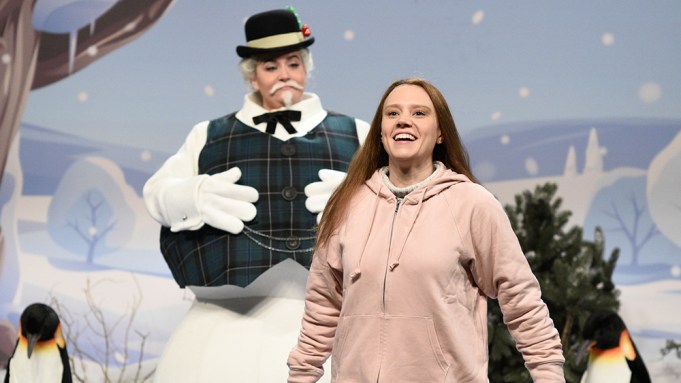 With the December holidays upon us, “Saturday Night Live” took a brief detour from its usual parodies of political press conferences and the impeachment hearings to instead begin its Dec. 14 episode with a sketch about average families discussing the state of the world over dinner — with a special message from Greta Thunberg (as played by Kate McKinnon).

The first family consisted of “SNL” cast members Melissa Villasenor, Cecily Strong, Bowen Yang and Kyle Mooney discussing Donald Trump. They were portraying a liberal family who wondered who would vote for Trump after all that has gone down and considering Trump’s actions if they had been done by Barack Obama, saying “he would have been in jail already.” Mooney called Trump “a criminal” and Yang pointed out that he “violated the Constitution and there has to be consequences.”

The counterpoint came from Chloe Fineman, Beck Bennett, Heidi Gardner and Mikey Day who portrayed a family in which the majority wondered, “How could anyone not vote for Trump after this?” and who claimed “Obama did way worse stuff than Trump ever did.”

Bennett as the patriarch called it “a disgrace” that Trump was being impeached. “What crime did he even commit?” he asked his family.

“The crime of being an alpha male who actually gets things done,” Gardner replied.

The third family was played by Chris Redd, Kenan Thompson and Ego Nwodim — but they had other things on their minds.

This started a debate about the skills of Martin Lawrence — to which Redd actually asked to talk about politics instead.

This third family also debated who would get voted off of “The Masked Singer,” but that, too, came back around to politics.

“If white people tell you, ‘I might not vote for Trump this time,’ you know what that’s called, right? A lie. Nobody was going to vote for Trump in 2016 either — and then guess who did? Everybody,” said Thompson.

The sketch cut back and forth between the three families to get their individual perspectives on the same issue, from the aforementioned voting and comparisons to Obama to Trump’s reactions to tweets and pivoting the mood to something more festive by asking Alexa to play music. The conservative family asked for “Baby It’s Cold Outside,” while the liberal family asked for “the politically correct version of ‘Baby It’s Cold Outside,'” and the family led by Thompson asked for “Santa Claus is Coming to Town by Michael Jackson” until Redd yelled at him for it.

The sketch wrapped up with each family saying a blessing that highlighted what everyone has in common, even with different religious and political ideologies: an interest in football. Bennett addressed his to “original American Jesus” and said his gratitude for “no more kneeling in the NFL — that was very hard for me,” while Thompson thanked “historically correct black Jesus” for “not one, not two but three black quarterbacks who have beat Tom Brady this season. And Yang thanked a “gender-neutral spirit” for “the Super Bowl halftime show, and that’s it.”

All of this was brought to us by hacking into Nest cameras, Aidy Bryant as Sam the Snowman said. She also pointed out that these three families also had in common that they lived in states where their votes don’t matter. “They’ll debate the issues all year long, but then it all comes down to 1,000 people in Wisconsin who won’t even think about the election until the morning of. And that’s the magic of the electoral college,” she said.

As Bryant was signing off, McKinnon’s Thunberg ran on-stage to deliver her own important message: that in 10 years, the North Pole, let alone Bryant’s snowman, wouldn’t exist.

“The ice caps will melt, and the elves will drown,” she said. “So Merry maybe our last Christmas to all, and Donald Trump, step to me and I’ll come at you like a plastic straw comes at a turtle. I can’t believe I’m saying this to a 70-year-old man, but grow up.”

Later in the episode the furry members of the family got in on the political discussion in a sketch in which episode host Scarlett Johansson portrayed a scientist who had perfected a device to read the thoughts of domesticated animals. The Pug test subject had a lot to say about Trump, as well as the lack of enthusiasm around the democratic hopefuls.