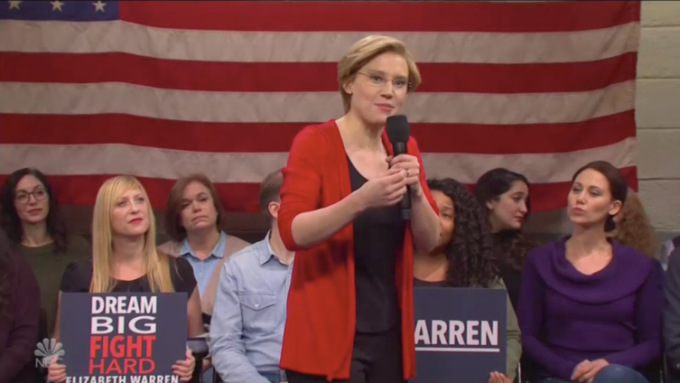 “First, I would like to pour one out for Beto O’Rourke, who just dropped out of the race,” she kicked things off. “Thank you so much for running a great campaign and for sticking around long enough to call me ‘punitive.’ That was so bad-ass. Let me know how my dust tastes, all right?”

From there, McKinnon’s Warren went in on Donald Trump — specifically his recent announcement that he would be moving to Florida, where the taxes are lower. “You know, where I pay my taxes?” she asked the crowd. “Every single state, out of principle.” She also advised Trump not to “stand too close to an orange tree because someone might pick your head.”

Taking questions from the crowd, the first was about why it took so long for her to release her Medicare for All plan, to which she replied, “Thank you for bringing up healthcare, that is my despacito.” But then things took a serious and strictly educational tone for a minute. “You know, in the last few years, the No. 1 reason families went bankrupt was because of healthcare costs — even the people who had insurance. It’s a tricky little corn maze, right?” McKinnon’s Warren said, adding that when Bernie Sanders was talking about this plan, people thought it was cool and then turned to her to say, “Fix it, Mom!”

“I’ll do it because that’s what moms do. With dads you eat birthday cake for breakfast and then go to Six Flags. And then I hold your hand while you throw up in my purse,” she said. “Daddy takes you to see ‘Boogie Nights’ when you’re 10. I provide the long, tender follow-up explanations about sex and if Mark Wahlberg’s penis is a realistic length. It’s not fun, but I will do it.”

McKinnon’s Warren also compared her plan to Joe Biden’s by saying hers was favorable simply because “it exists.” But pulling out a board with her three-point plan on it, she noted that the first step to paying for Medicare for All is to cut military spending, “so immediately dead in the water,” she said.

The second step said “Amazon creep,” which McKinnon’s Warren explained meant Jeff Bezos would “go from paying no tax to a tax.” Speaking directly to Bezos, she put taxes in terms best suited for him: by comparing them to Amazon Prime. “You reap the benefits, you’ve got to pay an annual fee,” she said.

Her final point was taxing the banks. “Duh,” she said. “They’re going to pay for it and not one penny from the middle class, and all we’ve got to do is convince J.P. Morgan to operate like a non-profit.”

She also addressed how to get swing voters onboard with the idea of universal healthcare. “Ooh way to subtly ask if I’m electable,” McKinnon’s Warren responded. “Careful, that’s my kink.” But she did go on to answer why lobbyists are against the idea, saying “they’re afraid they’re going to like it. … The bottom line is, people are afraid of change. They only like their current insurance because they already know what it is, not because it’s good. Some things seems scary until you try them and find out they’re great — like sushi or butt stuff.”