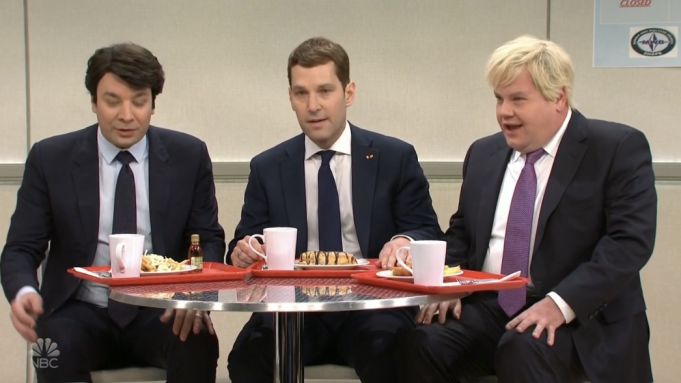 They appeared in the cold open sketch that went behind-the-scenes of a NATO conference to see what went down when the “bad boys” got together for lunch.

Things kicked off with them kicking a Romanian man (played by Mikey Day) out of his seat, with Corden’s Boris Johnson making a Brexit joke.

When Alec Baldwin’s Trump walked in with his lunch tray, they started talking about him instantly, pointing out how he spoke for “45 minutes the other day [when] it was just supposed to be for a photo.” Fallon’s Justin Trudeau noted that if he “looked like him, I’d try to distract the photographer, too.”

Baldwin’s Trump tried to sit with the trio, claiming he was Johnson’s friend, but Johnson didn’t want him “to make this harder than it already is.”

Generally, the trip was nice to Baldwin’s Trump’s face, asking him if he lost weight and telling him he looked good, but the minute he walked away, they went right back to gossiping — including about his belief that because of climate change “we need stronger toilets.”

Baldwin’s Trump tried to get back into their conversation when he overheard them talking about a potential party at Buckingham Palace — but it was one they didn’t think he’d want to attend because “you’d have to walk up stairs,” the food would be high quality but small portions, “your nightmare,” Rudd’s Macron pointed out, and although Trump likes young women, Corden’s Johnson said, this party would only have “Macron’s wife.”

Baldwin’s Trump laughed at that last bit because he likes when things are mean, but not about him, he said.

The guys invited Angela Merkel, Chancellor of Germany played by Kate McKinnon, to sit with them and told her Barack Obama might be coming to the party. “You like like him, right?” she was asked.

“I definitely didn’t draw his face on my body pillow or anything,” she replied.

“I heard someone likes you, too,” Fallon’s Trudeau told Baldwin’s Trump.

When asked who, the answer was Vladimir Putin.

Well, everyone but Baldwin’s Trump — and Cecily Strong’s Melania Trump, who stepped out onstage to say “Bullying is a serious problem — especially against President Trump. It isn’t nice. He would never do it to you. So please, European leaders, be best.”

She also then poked fun at Peloton, a stationary exercise bicycle company that recently released an ad featuring a young woman who gets a bike for Christmas from her husband and then proceeds to document her progress on it for a year through selfie-style posts. “Are you a scared woman?” she said. “Why not imagine biking away from it all? On Peloton. Merry Christmas to me.”

This “SNL” cold open sketch was a play on what took place earlier this week in London, when world leaders were caught talking negatively about Trump, and he canceled his planned news conference and headed back to Washington D.C. earlier than was scheduled.

Later in the episode, “Weekend Update” co-anchor and series co-head writer Colin Jost further commented on the real-life Trump accusing Trudeau of being “two-faced” after he talked about him behind his back. Jost said Trump was right, that Trudeau does have at least two faces, and pointed to a photo the graphics department rolled in from when Trudeau wore blackface and a turban to perform “Arabian Nights.” Co-anchor and co-head writer Michael Che responded to this by saying Jost was “coming out swinging.”

Che then pivoted “Weekend Update” to comment on Trump’s claim that, because of climate change, people have to flush their toilets 15 times. Che noted he didn’t know who could be doing that other than Trump. “I don’t mean to be gross,” Che said, “but if you’re up to double digits, just grab it out the bowl and toss it out the window.”