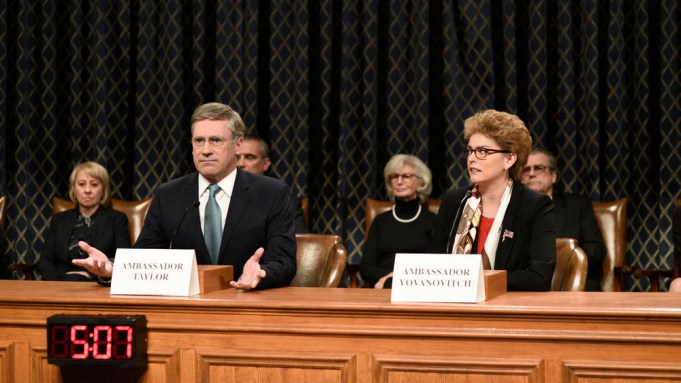 “Saturday Night Live” kicked off its Nov. 16 episode with a take on the biggest news story of the previous week (and foreseeable future): the impeachment hearings.

But another big story of the week, especially in Hollywood, was how NBC’s last remaining daytime drama, “Days of our Lives,” had let its actors out of their contract and would be going on an indefinite hiatus. “Saturday Night Live” managed to bring these two entertainment behemoths together in a cold open sketch entitled “Days of our Impeachment.”

In order to highlight how truly scandalous the testimony has been, the tagline for this sketch was “…where the only thing at stake is democracy.”

Each person delivered their own tagline in front of a wind machine for full dramatic effect before “like tweets through your timeline,” the show go on the road, so to speak.

Strong’s Yavonovitch opened the hearings, and as they went on, the show mingled serious discussions about the political situation with melodramatic pauses, facial expressions and music cues, with the biggest of them often delivered by Heidi Gardner. The sketch also included pull quotes about this new show, calling it everything from unfortunately necessary to “somehow less crazy than what’s really happening in our government.”

“Let the record show the president is intimidating the witness,” said Moffat’s Schiff in response to the president Tweeting in the middle of the hearing.

“If the president wanted to intimidate you, he’d shoot you in the middle of Fifth Avenue,” Day’s Jordan replied.

When asked if then they would impeach him, Day’s Jordan continued that he’d have to “look at the facts, but no.”

Hamm’s Taylor announced a “bombshell revelation” that “there was a second phone call,” after which Kate McKinnon joined the sketch as Giuliani, who noted that “Mercury’s in retrograde so my powers are at an all-time high.” McKinnon’s Giuliani also added that he has an insurance policy against the president: “I’m going to die in a mysterious boat explosion.” When Hamm’s Taylor asked if he was going to fake his own death, McKinnon’s Giuliani said, “Oh I can fake it? Oh great, I’ll do that.”

Bennett’s McConnell announced that the Senate voted, and the result was that Trump had been acquitted. When it was pointed out that this matter isn’t even before the Senate yet, he replied, “Oh, sorry for the spoiler. Just tell me when I’m supposed to say it.”

Other bombshells came with regards to “quid pro quo” and the president having an affair. “That storyline was from, like, last season,” said Hamm’s Taylor.

Villasenor’s Ocasio-Cortez noted that these hearings were missing one thing: a star. Taking her hair down, she connected with Hamm’s Taylor, who she said she didn’t expect to be “a low-key daddy. Here’s the red new deal. It’s my lips.”