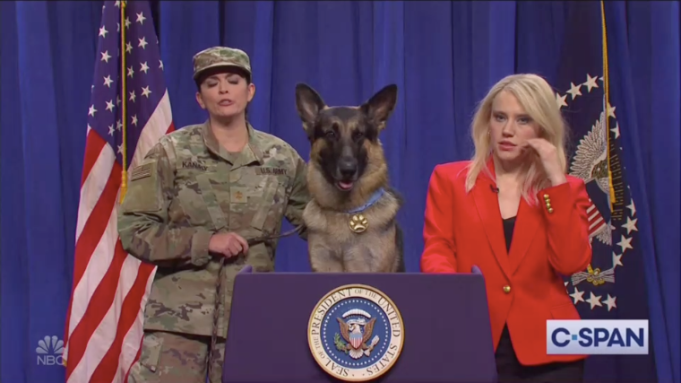 Stepping behind the White House podium once again, McKinnon’s Conway pointed out that Donald Trump’s administration had not given a formal press briefing almost eight months and “kept our new press secretary in hiding because our past ones were mocked, humiliated and forced to regain their dignity on ‘Dancing with the Stars.'”

Rather than introduce this person now, though, she moved on to talk about the killing of al-Baghdadi, which she claimed “according to the Constitution means that the impeachment can no longer legally move forward.” And then she welcomed a German Shepherd who portrayed the real-life Conan alongside Cecily Strong, who was playing a member of the military who said she could translate for Conan because she has a “master’s degree in linguistics from Dr. Doolittle University.”

Conan gave a brief press conference before he had to leave, as Strong’s character put it, “to meet with President Donald Trump to explain the situation in Syria.”

The first question, naturally, was, “Who’s a good boy?” The “SNL” production team pumped in some animal snarls to make it sound like the dog was giving Strong something to translate. “Seriously, with all due respect, I’m a trained military assassin, not some basic Labradoodle,” she said.

When asked if the terrorist raid was scary, Conan actually did bark back in response. Strong translated as, “A little, sure, but it could’ve been worse. The terrorists have guns and explosives, but at least they don’t have vacuum cleaners.”

Some of the other comments Conan had included that his military efforts are always as part of a team — “It’s always been I sniff your ass, you sniff mine” — and now that he is a hero, his life has changed in that, “honestly, I’m drowning in bitches.” Perhaps most importantly, though, he wants to find out who the whistleblower in the White House is “because that sound is driving him crazy.”

But Conan was not immune to addressing controversy. Aidy Bryant’s reporter character said Dog Twitter was exploding with allegations, to which Conan wanted to come clean about a Halloween party from a decade ago when he dressed up as a cat. “I did not mean to appropriate feline culture or put on cat-face. I also apologize for last Halloween when I dressed up as a chocolate lab.” Additionally, he admitted there is a video out there of him “barking at a Black mailman. But I swear it wasn’t about race because I don’t see color. Like, literally I’m color blind.” But also, “every day for the past 12 years I’ve humped someone’s leg without consent. For that, I apologize.”

Even still, he felt he deserved a better medal than the one Trump gave him — because that one has a paw on it, and humans’ medals don’t have feet on them.