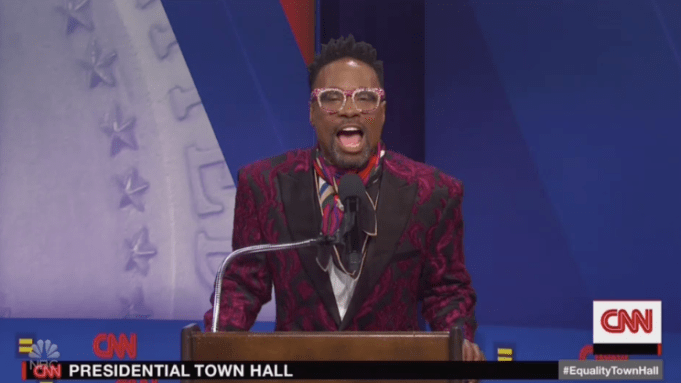 “Pose” star and recent Emmy winner Billy Porter popped by Studio 8H at 30 Rockefeller Plaza to participate in “Saturday Night Live’s” third episode of its 45th season. Appearing as himself, Porter announced the candidates for the Democratic Town Hall cold open sketch — an event that was supposed to focus on LGBTQ issues and “straight girls who make Pride all about them,” according to moderator Anderson Cooper (played by “SNL” cast member Alex Moffat).

“The category is Vanderbilt dynasty news realness,” he said.

Porter first introduced Cory Booker (played by Chris Redd), who took the stage by saying, “My girlfriend was in ‘Rent,’ so yeah, I get it.” He was referring to Rosario Dawson, who played Mimi Marquez in the film version of Jonathan Larson’s Pultizer and Tony Award-winning play.

Redd’s Booker was asked if he had always had respect for the LGBTQ community, which he first answered by saying yes, since Day 1, he has had “nothing” but respect. The question was soon followed with a rebuttal about his 1992 op-ed, in which he said derogatory things about the gay community.

This gave Porter the perfect segue to bring Colin Jost as Pete Buttigieg to the stage, introducing him as “mayor of booty gig.” When asked how he would respond to people who say he is “not gay in the right way,” Jost’s Buttigieg replied that he has heard that, but “there is no wrong way to be gay — unless you’re Ellen this week.”

Jost’s Buttigieg then followed with a question of his own: “Why am I not winning this?” He pointed out that he is a veteran, under the “legal retirement age and when I talk, I make sense.”

“You’re a great guy, just as a friend, not the president,” Moffat’s Cooper explained before saying the “meat and potatoes” of candidates was coming out next.

Enter Kate McKinnon as Elizabeth Warren. “Y’all know I’m not a lesbian, but all the ingredients are there,” she said.

Asked how she would respond if someone on the campaign trail said they were old-fashioned and believed marriage should be between one man and one woman, McKinnon’s Warren said, “I’m going to assume it’s a guy asking.”

“Oh snap, the library’s open and Miss Thing is about to get read,” said Porter.

McKinnon’s Warren took some jabs, including saying that if someone said they didn’t want to serve gay people at their small business, “I bet that’s not the only thing that’s small,” as well as that “when people say gay and trans people shouldn’t be included in civil rights act protection, well I wish their parents had used protection.” She then pulled her wig off.

But she wasn’t the showstopper of the sketch. Lin-Manuel Miranda appeared as Julian Castro who said he was “so happy to be here, and look, I even got a participation ribbon.” He also apologized for not being gay but said, “I am Latino, which we can all agree is something” and called himself Latinobama.” A brief piece of “Hamilton’s” score played when he began to talk about someone who almost became president, but he cut it off saying he was going to talk about Al Gore.

And Woody Harrelson, who hosted the season premiere episode and took a turn playing Joe Biden then, reprised the role. “Too close, Mr. Vice President, too close,” Moffat’s Cooper said when Harrelson’s Biden stood right next to him.

“You know me, I went to bat for marriage equality, and I believe we’re all equal whether you’re gay, lesbi, transgenital or queer, you’re OK with Joe,” Harrelson’s Biden said.

“Thank you for everyone who played tonight, but we all know, I’m your guy. So, in closing, ever been kissed by a VP before?” he continued before planting one on Moffat’s Cooper.

“You just helped me win a bet, Joe,” Moffat’s Cooper closed the sketch.