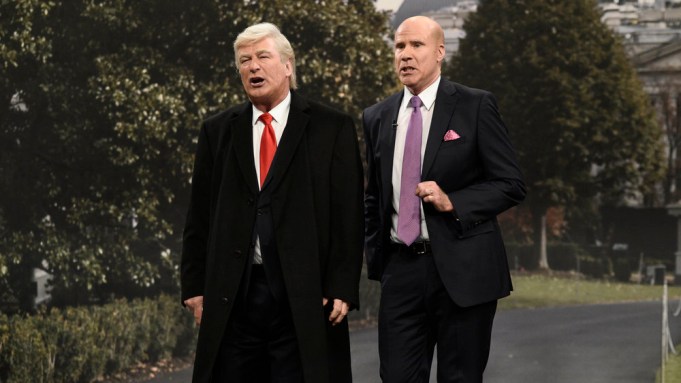 After another week of impeachment hearings that included a reenactment of a phone call between President Donald Trump and Ambassador Gordon Sondland, “Saturday Night Live” returned with its own take on the relationship between the two political figures.

Alec Baldwin returned as Trump, while episode host Will Ferrell stepped into Sondland’s bald cap for the Nov. 23 cold open sketch that saw Trump giving a hasty press conference, while holding his infamous Sharpie notes, on the White House lawn.

Calling the impeachment “nonsense,” he also noted that “as you can see from this very, very loud helicopter running behind me,” he didn’t actually have the time to take questions. So the reporters and American public would just have to trust him that “everything is perfect.”

But the reporters, played by cast members Heidi Gardner, Mikey Day, Cecily Strong and Kyle Mooney weren’t going to let him get off that easy: Mooney called out a question about his dealings with Ukraine.

Using the helicopter as an excuse for not being able to hear that well, Baldwin’s Trump replied, “It sounds like you said Sondland’s testimony completely exonerated me, and I totally agree.”

This of course prompted a follow up question, from Strong, about what part of the testimony could have possibly proved his innocence.

“This is me and Ambassador Sondland talking. He says to me, ‘What do you want?’ And I answer, ‘Two large pies, extra cheese, extra sauce.’ No, wait, that’s a different phone call,” Baldwin’s Trump read from his notes. “I said to Sondland, ‘I want nothing. No quid pro quo, bro.’ See? It’s right here in black licorice.”

Day pointed out that wasn’t the only conversation Trump and Sondland had. But Baldwin’s Trump said that doesn’t matter because he told him “no quid pro quo at least once, so any quid I get after that, that’s on them. That’s how it works. Just like when you meet a girl and you say, ‘If you’re a cop, you’ve got to tell me.”

Baldwin’s Trump also claimed it was “fake news” that he even knew Sondland. Mooney replied that Sondland donated a million dollars to his inauguration, and Strong added that he appointed him to the EU.

“Well I know him, but I don’t know him know him. I never, like, met him in person,” Baldwin’s Trump said.

Gardner wanted some clarification on Trump saying Representative Adam Schiff was the whistleblower. Baldwin’s Trump said he never said that but moved on quickly because Ferrell’s Sondland had made his way onto the White House lawn, and Baldwin’s Trump wanted to tell him it was “so good to meet you for the first time.”

“Right, right, right. Keep the quid pro quo on the low-low, got it,” Ferrell’s Sondland said. “I want to go on the record and say, you’ve got to lay off my boy. Everyone loves his ass: Ukraine, Russia, they’ll do anything for this man. I know, I asked.”