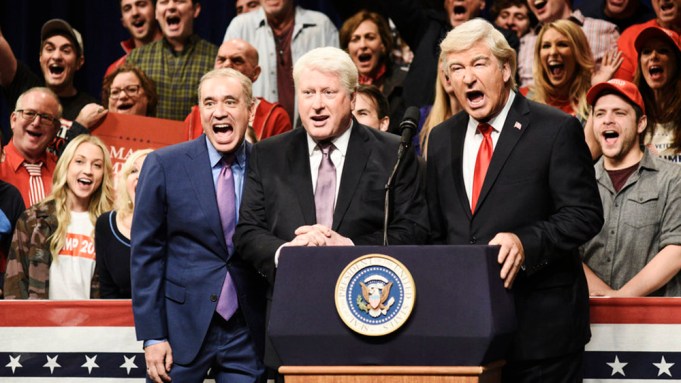 Alec Baldwin has recently said he doesn’t want to play Donald Trump anymore, but that didn’t stop him from returning to the Studio 8H stage for “Saturday Night Live’s” Oct. 26 episode. This time, though, he brought with him some past “SNL” cast members: Fred Armisen and Darrell Hammond.

Hammond reprised his infamous take on former president Bill Clinton, who, when asked why he was at a Trump rally said, “Is that what this is? I just followed the party!” He went on to say that if he had known a president could be “on the road like this,” he “would never come home.” The news of impeachment came as a surprise to Hammond’s Clinton, and he responded to it by calling Baldwin’s Trump a “dirty dog.”

“No, it’s not for that. They don’t mind when I do that, trust me,” Baldwin’s Trump said.

Armisen portrayed Turkey’s president, Recep Tayyip Erdoğan, who compared his friendship to Baldwin’s Trump as “like when [Francisco] Franco and [Benito] Mussolini used to take vacations together” and then said they were still working on getting the dirt on Joe Biden but they “could just make him disappear.”

In the cold open sketch, Baldwin stood behind a podium to respond to claims about “building a wall on the border of Colorado to keep the New Mexicans out.” He had a game show style model (played by Chloe Fineman) bring out a map of America that resembled a bird’s head and were labeled by “Good America,” “Trump Home 1,” “Trump Home 2” and “Lakes?” And he had the audience of extras behind him fill in his sentences when he said things such as “The lying impeachment inquiry continues, and what is it, really?” (They answered, “A witch hunt.”)

“And there was absolutely no?” he continued.

“Collusion,” they responded, to which Baldwin’s Trump said, “No, the new one.” The answer there was “quid pro quo.”

Trump’s Baldwin brought up some of his loyal followers to explain “what’s really happening” in this country. This group included Cecily Strong as a woman who claimed, “This man is under attack. It’s deep state lizard conspiracy and everyone’s in on it: the CIA, the FBI, the M-I-C, the K-E-Y and the M-O-U-S-E.”

Donning a long-haired wig and a leather vest, Mikey Day portrayed a member of “Bikers for Trump,” who came to the podium next saying that if “they try to get rid of you, then all of us bikers are going to ride.” When asked if he knew why they were trying to get rid of him, Day responded, “All this man did was shake down a foreign government to get dirt on his political enemy. Is that wrong?”

Aidy Bryant and Pete Davidson also appeared in the sketch as supporters of Trump: Bryant played a woman who worshipped him as “the one true white lord,” while Davidson was a member of ISIS. “I was a prisoner in Syria until last week when you freed me, so I just wanted to say thank you for bringing jobs back — to ISIS,” Davidson said.

Kate McKinnon came on Lindsey Graham, a “true southerner and I stand by my man,” she said. And Alex Moffat portrayed Mark Zuckerberg, who Baldwin’s Trump noted “got his ass handed to him by AOC so he’s one of us now.”