SAN SEBASTIAN —  “La Casa de Papel” (“Money Heist”) may be the most seen of Spanish series this year. Leticia Dolera’s still-to-bow “Perfect Life,” however, is the most laureled, sweeping at April’s 2nd Canneseries TV festival both best series and best special performance for its female leads, Dolera herself, Celia Freijeiro and Aixa Villagrán, from a jury presided over by “Dark” co-creator Baran bo Odar.

Sold by Beta Film and a Movistar+ Original Series – as women’s voices are heard ever more in its line-up – “Perfect Life’s” full series now world premieres at the San Sebastian’s big screen Velodrome – a sign of its perceived broad audience appeal.

“Winning Canneseries, up against ten other series at a place where Leticia wasn’t well-known, is one of the loveliest things that has happened to me,” says Domingo Corral, Movistar+ head of original fiction.

He adds: “Leticia’s series talks about women’s reality in this stretch of life when they are balancing up whether they’ve achieved what they wanted, or can live with what they’ve achieved, and have to accept their imperfections, if they haven’t done already.”

Seemingly light, fun, but not pulling its punches, “Perfect Life” shows those models for success being set early in childhood. “Hello, I’m Lady Di, and I’d like to buy a flat,” says a little girl’s voiceover in the first scene of “Perfect Life,” in a retro flashback. Cut to some 25 years later and the little girl, now 30something María, is actually buying a flat, until her fiancee baulks at signing a 25-mortgage and walks out on her.

Left at the altar, in house buying terms, the manic control-freak María lets herself go, has a one-night stand with Gary, the gardener, who has an intellectual disability. Meanwhile, her bet friend Cris is taking the pill behind the back of her husband who wants to swell their brood. Sister Esther, wants to paint, but can’t sell, works at a waxwork museum.

This is a world where both men and women are corralled by over-achievement targets and traditional role models – the only man who shows his weaknesses is Gary.

You play with flashback to measure the gulf between expectation – María dream as a little girl of buying a flat, having a family; Cristina enjoying great sex with Pablo in a toilet – and reality. The problem which at least face is that the bar is set so high and so limited in terms of women’s expectations that they inevitably end up stressed at not making the grade….

Exactly. The three protagonists have grown up with the idea of what a perfect life is or what success and happiness are. The three of them are going through a crisis during the series that will make them rethink the foundations they have built in their lives and will begin to let go.

I wanted to explore different aspects with each of them. Cris embodies that figure idealized so many times of the super woman, a woman who is good at her job, a good friend, good mother, good lover, good wife, dresses well, goes to the gym and on top of all that she feels fulfilled. Part of her journey will be to admit to herself that despite having achieved all that, something’s wrong.

With Esther we explore the idea of success and also the frustration that comes from the lack of it. Esther stood out in the art world since she was a young girl and won several important awards; now she works at the Wax Museum and paints in her spare time. She is an artist who is going to have her idea of success changed by society and her environment, and that pressure is going to pile up into a midlife crisis.

With María, we explore the concept of family and possible new (and not so new) models. María grew up with the hope of having a classic family with her lifelong boyfriend –  two kids, a house, the dog. Craving to be in control, she will be faced with the idea that there can be other family models and that not everything is husband-wife-children-house-dog.

One of the most interesting aspects of the series may be its models of masculinity. Cristina’s husband, Pablo, is a warrior figure, coming back every night to recount his victories at work, and a sex machine. But the man with the largest intelligence, when it comes to emotional empathy, is in fact Gari, despite his intellectual disability. Men are also restricted, again pressured by role model limitations. In this sense, the series, which I’m sure will be called “feminist,” is also “masculinist,” I think.

Pablo, who’s comfortable in his marriage of many years and focused on his work, will see how Cris changes and is no longer satisfied with the life they have built, and how that transformation will inevitably affect him too.
Gari’s character is really another kind of man, a man with a disability, who will make María face one of her biggest flaws: the need for control.
In the series we see more male characters which, despite being secondary, we have tried to endow with humanity and sensibility, like many of the men around me.

”Perfect Life” is a fun, female-driven show, behind and in front of the camera. But, it does push the envelope on several issues, if one thinks about it – and one hopes some people will: For example, that Cris, while having a very full sexual life with her husband, could still feel attracted physically to another man. 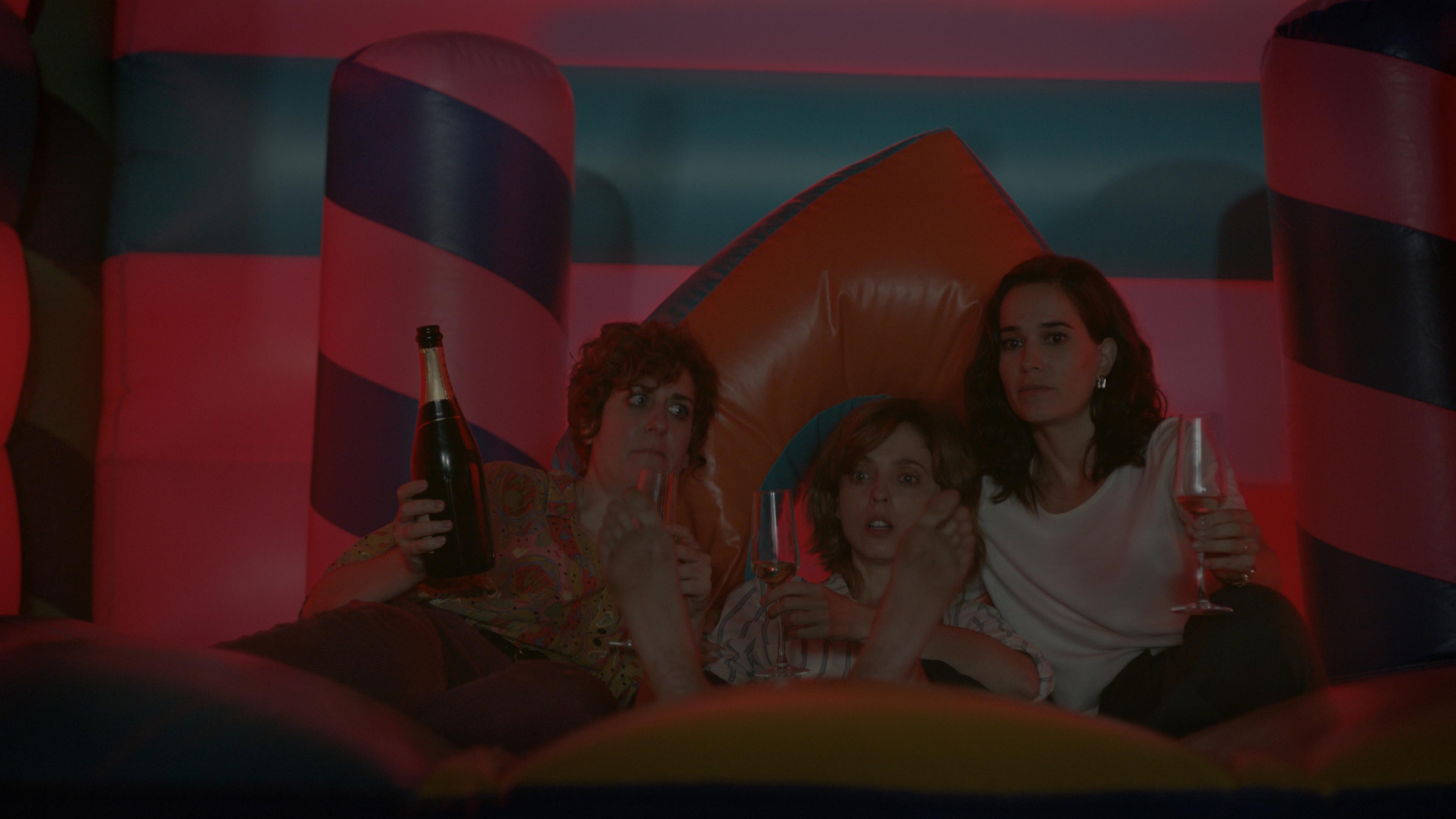 The series is called “Perfect Life.” I sense that you don’t want to stress either that what the women experience is Totally Imperfect Life, just, well, Life. One way to do so, is to mix tones, such as at the morgue, where mini-scenes mix pathos (the woman who thanks the sister for coming, when she’s just walked in by mistake), full-on emotion (Gary’s funeral speech), potentially life-changing drama (Cristina meeting an attractive stranger in the car park) and bathos (María, caught with poop on her hands when the potential man of her life turns up).  Could you comment?

Yes, that mixture of tones tries to be a reflection of life itself, which I think, is a mix of grotesque moments mixed with moments of emotion, humor, drama, sex, tension… and they often mix or overlap.

With eight half-hour episodes, “Perfect Life” will be binged by many, maybe most viewers. Did this influence Manuel and you when writing the screenplay?

From the writing of the bible I tried to make each chapter self-conclusive and tell something in itself. At the same time, the series had to be able to be seen as a movie and the characters had to have a dramatic arc and a personal journey as a whole.

Later, when writing of the scripts with Burque, we focused a lot on having each chapter deal with a theme, without losing sight of the central theme of the series, that was something that had to beat from underneath. We were also very clear from the start that we wanted the series to have good rhythm and have many things happening, so that the plot kept you hooked.

For the first version of the pilot I analyzed scene by scene the pilots of “Girls,” “Transparent,” “Casual” and “Catastrophe” and I realized the amount of plot twists each episode had. I was fascinated, because as a spectator I hadn’t been aware of that.

The art direction of eye-catching, pop-out primal colors is lively, whether it be Esther’s flat or a bouncy castle at Cris’ daughter’s birthday party. What were the reasons for choosing this style?

The castle symbolizes that world of colors and fantasy with which the three protagonists grew up, that their princess fortress deflates is a metaphor of how the foundations of their life are going to get shaken up from that point on.

I liked the idea of each character identifying with a color and having that color tell you a bit about their personality. With Laia Ateca, the art director, and Vinyet Escobar, our costume designer, we proposed that each character had her color, so Esther is pink and magenta tones, Cris is green and earthy tones and María moves in a cold palette of blues and greys. All of this played out from in a realistic and naturalistic manner, something we were also looking for from the cinematography.

Regarding cinema, Variety wrote an article last year in our Spotlight on Catalonia about how many of the most exciting members of Catalonia’s new generation of filmmakers are women. Do you have a sense of belonging to this generation?

I liked the article a lot and that you gave visibility to all that female talent. For me it’s exciting to be linked with all those female directors that I admire. At the same time, it’s strange because all of them come from a school, either from ESCAC or from the Pompeu and they are the result, not only of their talent and effort but of the good training they must have received in both schools. I, however, have never studied cinema, I’ve done a lot of cinema as an actress, I’ve read what I could about cinema and then I’ve trained directing my short films before jumping into the long feature format four years ago.