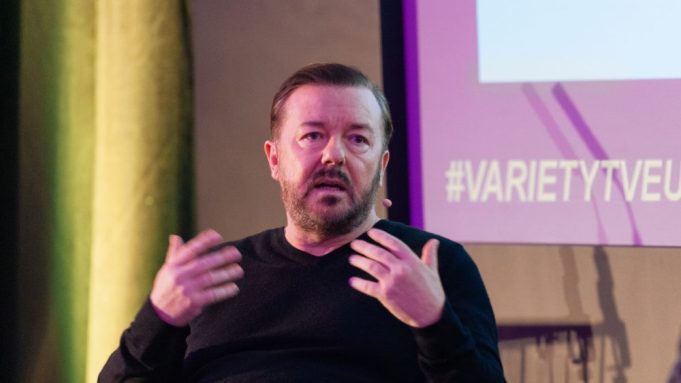 Ricky Gervais has said he is open to a third season of “After Life”… if he gets help from the cast writing it. The writer and actor also said that he now has a first-look deal with Netflix but not an overall deal that would preclude him working with other platforms or broadcasters.

Gervais was speaking at the Variety European TV Summit in London on Thursday and was asked whether he would go back to traditional TV or the BBC, the home of the “The Office.” “I never say never,” he said. “I have never taken a handcuffs deal in my life. I haven’t got one with Netflix. They get first look now because it’s great, it’s perfect for me.”

The star is working on the sophomore season of “After Life,” the comedy-drama about a man seemingly empowered by giving up on life following the death of his partner. Netflix has shared all of the numbers for his show, he said, although it wasn’t clear to what extent he was kidding in an interview session that was heavy on laughs.

With a stated preference for a small run of seasons and some specials on his projects, he was asked if he had an idea for an “After Life” one-off special. “I do – unless I can get some of the cast to help me write the third series and just sit back and just turn up,” he quipped.

He also told the London audience he had been taken aback by the intensity of the response to the show. “You suddenly realize everyone is grieving but they don’t usually tell a stranger. I wasn’t expecting that, I didn’t think it was the most important thing about the show – for me it was a dramatic device to deliver jokes, drama.”

Gervais talked about working with the Netflix and was quizzed on whether he was given creative carte blanche. “I’ve been lucky enough to always get final edit, I demanded it when I was a nobody with ‘The Office’ and got it because it was low-risk and no one cared,” he said. With Netflix, there’s freedom but you have to deliver. “It’s not a charity, If you don’t deliver, they drop you.”

With several shows, films, and high-profile presenting gigs under his belt, Gervais outlined his wider goals. “As I get older, I don’t want to try and be bigger or richer or try and win more awards, I just want to go, ‘Is this the most honest I have ever been?’ That’s what drives me now,” he said.