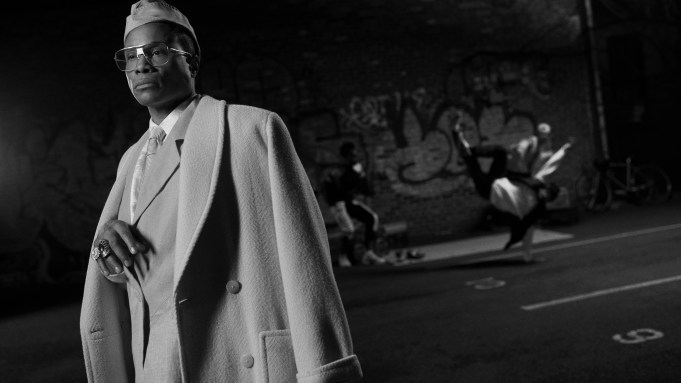 Dozens of neon-clad extras lounge, dance, and wait for their instructions. Fog machines churn out streams of smoky haze, the better to mask the fact that we’re not actually in a dark bar on a summer night, but a cavernous warehouse tucked deep into the Bronx on a cold May afternoon. Here on the set of “Pose,” the ballroom scene circa 1990 — the year Madonna’s ‘Vogue’ launched this culture into the mainstream —  feels anything but artificial.

And yet: co-creator Ryan Murphy — also directing this fourth episode of the second season — isn’t quite satisfied. Wrapped in a voluminous black sweater, Murphy weaves through the practicing breakdancers with a note for those extras playing spectators. “I never want to see lines on camera,” Murphy says, pointing to how they’ve all instinctively settled into a neat row. “I want to make sure it looks messy.” The line quickly loosens up, spreads out, sprawls onto the dance floor. Satisfied, Murphy gives the all clear to launch into the scene; everyone springs into action, shouting and voguing and spinning with all their might.

The FX drama, which returns on June 11, quickly made a name for itself by embracing this thrilling (and yes, messy) energy as it told the stories of queer, trans people of color that history has so often forgotten. The first season traced the lives of several talented, determined people who find a community in New York City’s ballrooms in 1987, where they could show off their skills and compete with their peers like never before. It didn’t ignore the hardships many queer and trans people of color faced; community pillars Blanca (Mj Rodriguez) and emcee Pray Tell (Billy Porter) get diagnosed with HIV early in the season. But it also purposefully highlighted its characters’ joys and triumphs, not least because the “Pose” creative team understood that a larger (straight, cis) audience was about to discover a culture they may never have heard of before.

“‘Pose’ serves as a history lesson, and we’re not shy about that,” says co-creator Steven Canals. “We know the moments when we’re talking to the audience. That’s intentional.”

Season 1 therefore served as a general introduction to the ballroom scene and the creatives who made it thrive. Going into season 2, the team decided that it was time to dig even deeper into the realities their characters — most of whom are poor, queer people of color — would have faced. “There are some sacrifices that have to be made,” acknowledges writer, director, and executive producer Janet Mock of the difficult plot twists ahead. “To me, what’s impactful is that you fall in love with these characters in season 1…season 2, you must deal with the consequences of not taking action. You have to deal with the embodiment of the systems they’re dealing with.”

In jumping from 1988 to 1990, “Pose” is now necessarily tackling the urgency of the AIDS crisis and its devastating ripple effects throughout the communities the show has so lovingly portrayed. “I thought [‘Pose’] had a definite beginning, middle, and end,” says Murphy. “This show will end in 1995; it’s going to end before AIDS drugs became available. So it really is about the rise and decimation of a world.” Whereas the first season focused on the characters’ individual ambitions, Murphy says, the second will confront a crucial, awful question: “How do you do that when everyone around you is dying?”

To illustrate the depth of the horror, Murphy chose to open this season with a visit to New York City’s Hart Island, where many thousands of unclaimed bodies were unceremoniously dumped. “You watch it and it reminds you of the Holocaust. Images of these mass graves, people wearing hazmat suits,” says Murphy, who didn’t know about the island himself until he read a recent New York Times article about it. “It’s emotional, and it’s history.” Murphy, who recently defected from FX for an overall deal at Netflix, emphasizes the importance of “Pose” selling to the streamer to air worldwide. “LGBTQ history is so important and so undocumented,” he continues. “Millions of people will now learn about this and be outraged.”

“I feel so blessed, because I spent so much time trying to just get on TV,” Porter continues, “and when I think about how long it took to get to this place, and how I felt so marginalized and so dismissed by the film and television industry until now…” He slaps his hand on the table for emphasis: “It had to be this. I had to wait for this moment.” He leans back, eyes wide. “It really matters. We’re talking about a group of people that nobody has ever heard of before. Real change the world, Norman Lear-ish, focused, intentional art — that’s also entertaining.”

That unique blend is what “Pose” is counting on as it continues to tell a story that too many don’t know without losing its sense of delight entirely. “It’s still a very aspirational show,” Murphy insists. “I think the [LGBTQ] community has always, in my experience, gotten through these dark times with humor, a sense of community, and appreciation of the absurd.” That’s why, Murphy continues with his usual frank solemnity, “Pose” will always represent a unique milestone for him. “This show, of everything I’ve done in my career,” he says, “is the thing that has done the most good in the world, by telling people these stories.”

Back on set, the dancers are killing time between takes, practicing their angular moves and trading fond barbs about each other’s form. Somewhere on the floor, a voice starts a freewheeling singalong to Rodgers and Hammerstein’s “Cinderella,” punctuated by giddy laughs: “Impossible things are happening every day… / it’s possible!”